Oral proceedings, appeals and divisional applications: options for tricky cases at the EPO

We’ve all experienced tricky cases at the European Patent Office (EPO). Sometimes, it seems the examiner simply cannot be convinced about the patentability of a particular invention. After several rounds of written correspondence, the dreaded “summons to oral proceedings” is therefore received. It can then be difficult to decide on the best strategy. Should you attend the oral proceedings to plead your case? Would it be better to simply allow the examiner to refuse the application and then file an appeal? Or would filing a divisional application be most appropriate? This article explores some of the options.

A simplified version of the EPO examination and appeals procedure after an applicant (or appellant) receives the summons to oral proceedings (OPs) is shown in the flow chart. We will discuss the parts of the procedure highlighted in blue. 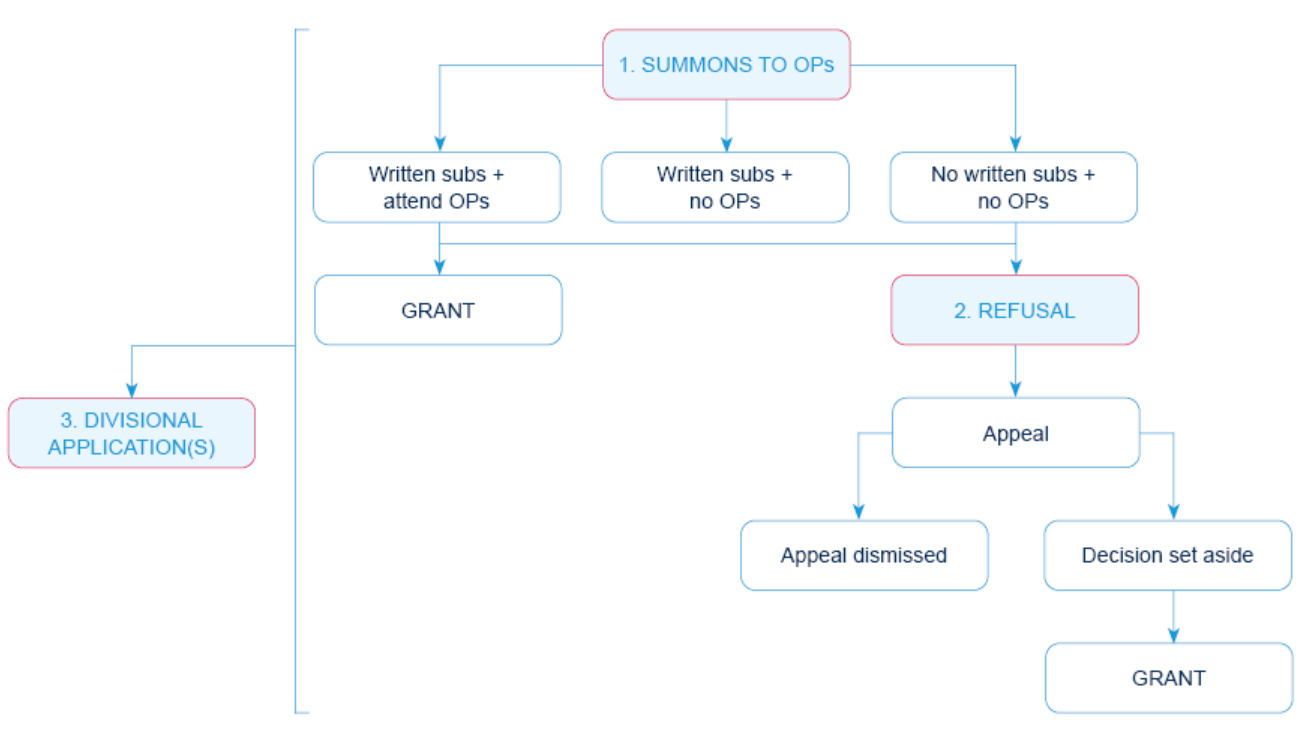 A summons is issued upon request if the examiner intends to refuse the patent application. This typically happens after one or more written examination reports have been issued (although, in exceptional circumstances, a summons may be issued as the first examination report). The summons schedules the oral proceedings and provides the opportunity to file written submissions in advance of them taking place. A written explanation of the outstanding objections is provided with the summons. Options in response to the summons include options A, B and C.

Option A may be appropriate if, for example, the examiner’s objections seem well founded and the case is of limited commercial importance. Occasionally, option A may also be appropriate if you disagree with the examiner’s objections to such an extent that further engagement with the examiner is unlikely to be fruitful (for instance, if the examiner repeatedly refuses to search claims directed to a computer-implemented invention due to an alleged “lack of technical effect”). Option A will very likely result in refusal of the application.

Option B may be appropriate if, for example, there are still written arguments and/or amendments you have not put forward which might persuade the examiner but the case is not of sufficient commercial importance to justify the work of attending oral proceedings. If the examiner is convinced by the written submissions, the case will be granted. Otherwise, the case will be refused.

Written submissions may be filed with several prioritised “requests”, each of which include a set of claims which the examiner is asked to consider. If the examiner believes one of the filed requests overcomes the outstanding objections, they may make contact before the oral proceedings to try to allow the case without holding the oral proceedings.

Filing written submissions and seeing the reaction from the examiner may thus help in deciding between options B and C.

The benefit of an appeal is that the EPO’s Board of Appeal is completely separate to the EPO’s Examining Division. An appeal therefore allows a completely new set of eyes to review the case.

However, an appeal is not a re-examination of the case. Rather, it is an assessment of whether the Examining Division’s decision to refuse the case was legally correct. An appeal must therefore be based on the requests, facts, objections, arguments and evidence previously put forward during examination. Admission of any new requests, for example, is therefore at the discretion of the Board of Appeal.

For commercially important cases, it is therefore advisable to file written submissions and attend the oral proceedings before the Examining Division (that is, option C), if budget allows. Doing this ensures that all admissible requests and arguments which might be relied on at appeal are submitted during examination and therefore should be admitted at appeal (for this reason, it is also important to give your patent attorney authorisation to amend the application during the oral proceedings within certain bounds so they can address any new objections the Examining Division may raise). An exception to this may be if, for example, all conceivable requests and arguments concerning the point at issue have already been put forward in the written procedure and no new requests or arguments would have been submitted if the oral proceedings before the Examining Division had been attended. In this case, options A or B may be appropriate.

In some other jurisdictions, “continuation” applications (or similar) may be used to try to progress a case repeatedly rejected by an examiner. Unfortunately, trying to use divisional applications at the EPO to similar effect is often not a successful strategy.

Of course, there are other good reasons for filing a divisional application. For example, a divisional may be required to pursue protection for embodiments removed from the scope of the parent claims to overcome a lack of unity objection. A divisional may also be filed to try to obtain a broader claim scope if the claim scope of the parent is narrowed early during examination to try to obtain a swift grant. It may also be desirable to file a divisional if, for example, examination of the parent case is ending but there is still commercial value in maintaining a pending patent application.

For tricky cases at the EPO, it is common to receive a summons to oral proceedings. How to deal with this often depends on the commercial importance of the case.

For commercially important cases, filing written submissions in advance of the oral proceedings, maintaining contact with the examiner and, if necessary, attending the oral proceedings is usually the best strategy. The case will then either be granted or, at least, should be in a good state for appeal proceedings.