Summary: The Federal Reserve Board has issued a notice of proposed rulemaking proposing revisions to Regulations Y and Regulations LL. The proposal would revise and clarify the standards for determining when a company exercises controlling influence over another company for purposes of the Bank Holding Company Act and the Home Owners’ Loan Act.

On April 23, 2019, the Federal Reserve Board (“Fed”) issued a notice of proposed rulemaking proposing revisions to Regulations Y and Regulations LL.1 The rulemaking would revise the standards for determining when a company exercises controlling influence over another company for purposes of the Bank Holding Company (“BHC”) Act and the Home Owners’ Loan Act (“HOLA”). In particular, the rulemaking would codify several presumptions for determining when one company’s relationship with another company rises to the level of controlling influence. The stated aim of the Fed’s proposal is to provide clearer and more transparent control rules for banks and companies that are considering forming economic relationships with banks.

Control is a critical concept under the BHC Act and HOLA. The application of both statutes often turns on whether a financial institution controls, or is controlled by, another company.2Under both statutes, an entity controls another entity if the first entity “(i) directly or indirectly or acting through one or more other persons owns, controls, or has power to vote 25 percent or more of any class of voting securities of the other company; (ii) controls in any manner the election of a majority of the directors of the other company; or (iii) directly or indirectly exercises a controlling influence over the management or policies of the other company.”3While the share ownership and director election thresholds are relatively straightforward, the third standard—whether a company “directly or indirectly exercises a controlling influence” over another company—can pose significant challenges for institutions attempting to navigate the control test. The Fed’s proposal is intended to clarify that standard.

The Fed’s proposal would revise Regulations Y and LL to identify tiered presumptions of control based on seven factors: 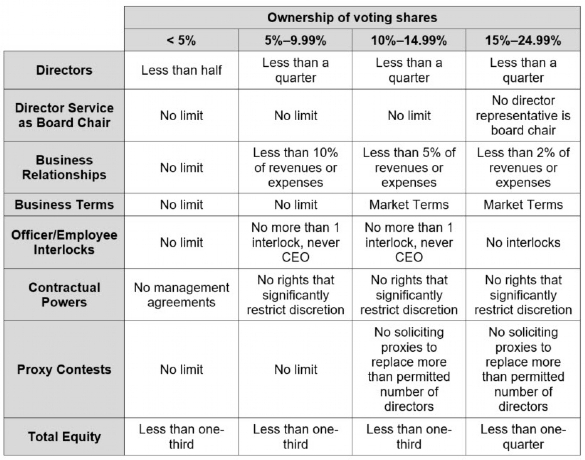