With an intent to reduce direct tax litigation pending before various courts/ appellate forums  [ie Supreme Court or High Court or Income Tax Appellate Tribunal (ITAT) or Commissioner of Income Tax (Appeals) (CIT(A)), together referred to as Appellate Forum], the Government introduced ‘The Direct Tax Vivad Se Vishwas Bill, 2020’ (Scheme) before the Lok Sabha on 05 February 2020 (please see our Ergo). Thereafter, various representations were made by the stakeholders expressing their concerns and suggested modifications to the Scheme. Government has noted these concerns and suitably modified the Scheme that has been passed by the Lok Sabha on 04 March 2020.

Notable changes made in the Scheme

➢  Scope of the Scheme enhanced

Originally the Scheme could only be availed by those taxpayers who have any appeal (whether filed by taxpayers or by tax authorities) pending before Appellate Forum as on 31 January 2020. Now, the following cases are also eligible for resolution under this Scheme.

▪  Taxpayers in whose case, orders have been passed by the tax authorities or CIT(A) or ITAT or High Court and the time limit for filing appeal against such orders has not expired as on 31 January 2020;

▪  Cases where DRP has issued directions and the tax authorities have not passed any final order on or before 31 January 2020;

▪  Cases where revision petition has been filed before the Commissioner of Income-tax by the taxpayers and the same is pending as on 31 January 2020; and

The revised formula for computing ‘disputed tax’ is as under: 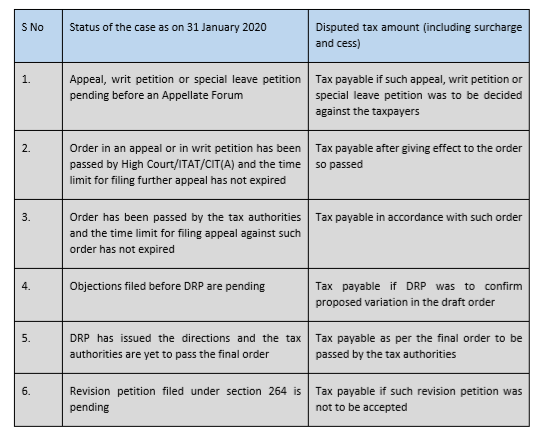 With respect to cases where notice of enhancement has been issued by CIT(A) on or before 31 January 2020, the disputed tax amount will be increased by the amount of tax pertaining to issues covered in the enhancement notice.

With respect to cases where tax dispute pertains to reduction in MAT credit, unabsorbed losses or depreciation, the taxpayers will now have an option to either:

▪  Carry forward the reduced MAT credit or losses or depreciation in such manner as may be prescribed.

▪  Now the taxpayers are required to submit proof of withdrawal of appeal or claim made in arbitration/conciliation/mediation at the time of making payment of amount determined under the Scheme;

▪  It has been clarified that making a declaration under this Scheme will not set any ‘precedent’ for subsequent proceedings of the taxpayers; and

▪  Taxpayers will now be entitled to get refund of excess amount paid under Income-tax Act in respect of his tax arrears which exceed the amount of disputed tax computed under the Scheme. However, no interest will be paid by Government on such excess tax payment.

Amount that needs to be paid under the Scheme 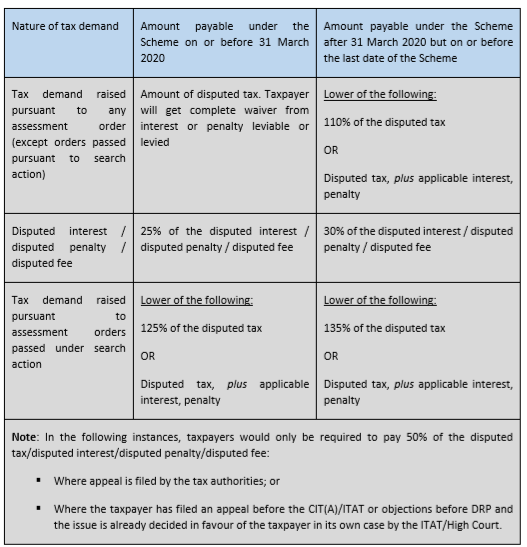 ➢  Who / what is not eligible for the Scheme

▪  Following tax disputes would not be eligible for this Scheme:

•  Appeals against assessments or reassessment orders made pursuant to ‘Exchange of information’ received from foreign jurisdictions; and

•  Appeals where ‘prosecution’ has been instituted on or before the date of filing of Declaration.

▪  Taxpayers in respect of whom prosecution for any offence punishable under inter alia the Indian Penal Code (initiated by Income tax authorities); Prevention of Money Laundering Act, 2002; the Prohibition of Benami Property Transactions Act, 1988 etc has been instituted on or before the filing of Declaration, are also not eligible for the Scheme.

The amendments brought by the Government in the originally drafted Scheme clearly reflect the intention to reduce pending tax litigations. This is a welcome initiative as Government has done its bit by widening the scope of the Scheme, by responding to suggestions made by various stakeholders. Now it is upto the taxpayers to decide as to whether they should opt for the Scheme after considering the merits of their disputes. Having said that, given the fact that the payment can only be made once an order is passed by the Designated CIT determining the amount payable under this Scheme, taxpayers who opt for the Scheme should keep this in mind and consider filing Declaration as early as possible. This will ensure that the Designated CIT gets sufficient time to pass the Order and the amount so determined can be paid by 31 March 2020, in view of the fact that the Scheme provides for additional payment of taxes if payment is made after 31 March 2020. Even Central Board of Direct Taxes, Ministry of Finance in its Circular No. 07/2020 dated 04 March 2020 on the Scheme has stated that time limit of 15 days available to Designated CIT for passing an Order is an outer limit and has instructed the Designated CIT to pass an Order at an early date so that the taxpayers can make payment of the amount determined under the Scheme on or before 31 March 2020. The Scheme will be required to be passed by the Rajya Sabha and presidential assent will have to be obtained, which should happen very soon. Necessary application forms for filing declaration, payment of taxes etc are also expected to be notified soon.

“The content of this document do not necessarily reflect the views / position of Khaitan & Co but remain solely those of the author(s). For any further queries or follow up please contact Khaitan & Co at  [email protected]”