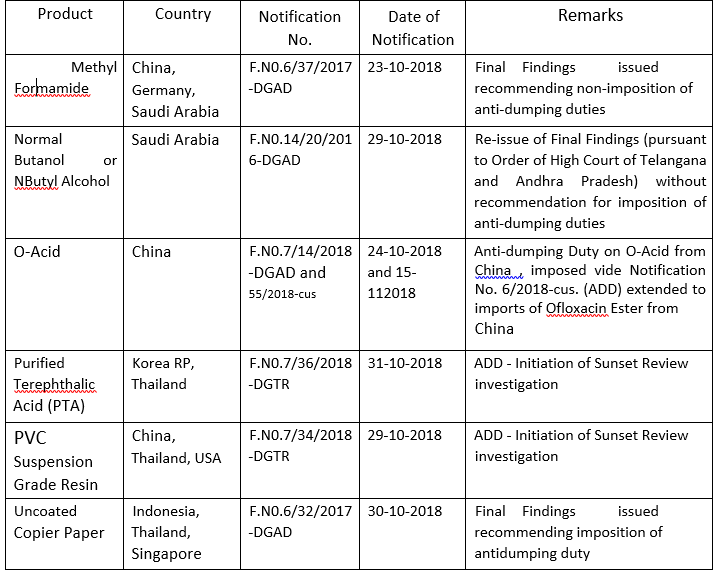 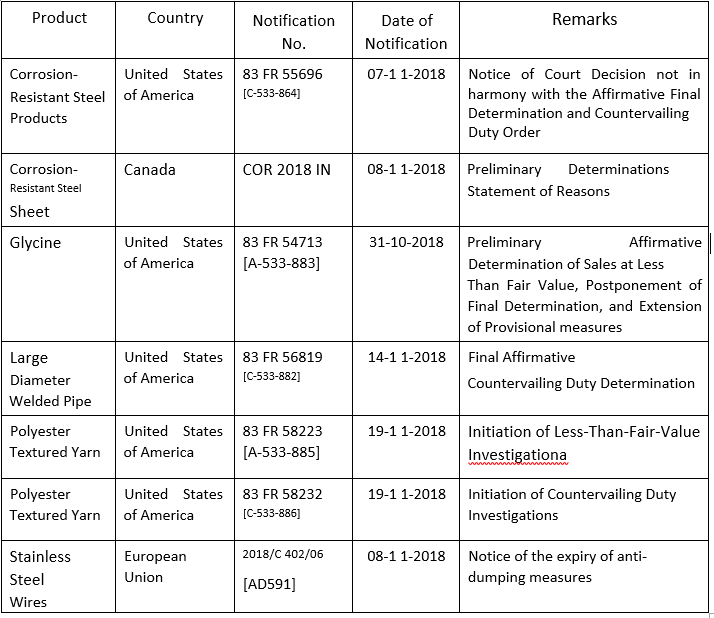 Finding favor with Philippines, the compliance panel held that:

On November 6, the WTO circulated the panel report in the case brought by Japan in "India Certain Measures on Imports of Iron and Steel Products" (DS518). Before the Panel, Japan had challenged a safeguard measure imposed by India with respect to imports of certain steel products as being inconsistent with various provisions of the Safeguards Agreement and the GATT, 1994.

India had requested a preliminary ruling regarding the compatibility of Japan's complaint with Article 3.7 of the DSU since the measure at issue had expired. The Panel ruled that the expiry of the measure after the establishment of the Panel did not excuse the Panel from exercising its function under Article 11 of the DSU to make findings with respect to the matter raised by Japan, as well as to make recommendations to the extent that the measure continued to have any effects.

With respect to the substantive and procedural claims made by Japan, the Panel held that India had acted inconsistently with provisions of GATT, 1994 and the Agreement on Safeguards. However, the Panel did not uphold Japan's claims pertaining to "major proportion" of the domestic production, failure of the Indian Authority to assess the captive segment of the market, regarding the Indian Authority's assessment of positive trends in certain injury factors and regarding the consistency of India's compliance with Article 12.1 (a), (b) and (c) regarding timely notifications to the Committee on Safeguards.

On October 31, the WTO circulated the panel report in the case brought by Turkey in "Morocco — Anti-Dumping Measures on Certain Hot-Rolled Steel from Turkey' (DS513). In the dispute, Turkey challenged Morocco's anti-dumping measures against certain hot-rolled steel products from Turkey. The Panel exercised economy with respect to most issues, finding notable inconsistency on the part of Morocco on three grounds:

Pakistani duties on film, Korean duties on steel, US measures and members' countermeasures on steel and aluminium - Panels established

On October 29, at a meeting of the WTO's Dispute Settlement Body, WTO members agreed to a request from the United Arab Emirates for the establishment of a panel to examine antidumping duties imposed by Pakistan on biaxially oriented polypropylene film (BOPP film) from the UAE and a request from Japan for a panel to examine anti-dumping duties imposed by Korea on stainless steel bar from Japan.

The DSB also considered requests from seven WTO members for panels to review additional duties imposed by the United States on steel and aluminium imports, four requests from the US for panels to examine countermeasures imposed by WTO members on US imports in response to the steel and aluminium duties, and a US request for a panel to examine Chinese measures for the protection of intellectual property rights.

On October 22, the WTO circulated to the WTO members a request for consultation with Armenia and the Kyrgyz Republic filed by Ukraine. The request pertains to anti-dumping duties imposed by the two countries on steel pipes from Ukraine.

On October 22, the WTO circulated to the WTO members a request for consultation with China filed by Brazil. The request pertains to certain measures imposed by China on imports of sugar from Brazil.

On November 13, the WTO circulated to the WTO members a request for consultation with Korea filed by Japan. The request pertains to alleged subsidies provided by the Korean government to its shipbuilding industry.

Central Board of Indirect Taxes and Customs in the Ministry of Finance has updated the procedure for seeking permission for in-bond manufacturing and for maintaining various records. An elaborate Circular No. 38/2018-Cus., dated 18-10-2018 issued for this purpose also prescribes various forms and clarifies on duty liability on removal of processed goods from such warehouse. As part of ease of doing business and to avoid duplication in the process of approvals, the form for seeking permission for inbond manufacture will also serve the purpose for seeking grant of license as a private bonded warehouse. The prescribed form of application has been so designed that the process for seeking grant of license as a private bonded warehouse as well as permission to carry out manufacturing or other operations stand integrated into a single form.

Further, a separate form to be maintained by a unit operating under Section 65 of Customs Act for the receipt, processing and removal of goods, has been prescribed. The new form combines data elements required under Manufacture and Other Operations in Warehouse Regulations,1966 and Warehouse (Custody and Handling of Goods) Regulations, 2016. The circular also prescribes a triple duty bond for the warehoused goods which is required to be executed by the owner of the warehoused goods.

Directorate General of Foreign Trade under the Ministry of Commerce and Industry has prepared a list of documents required by the exporters while filing applications for grant of export authorisations for restricted items. Trade Notice No. 35/2018 issued for this purpose also states both online and offline application processes under actions on part of firms/individuals, while also providing steps to be followed by the DGFT. Some specific documents as required by concerned administrative Ministries for grant of NOC have been consolidated here while check list for other frequently traded restricted goods will be prescribed shortly.

Validity period of Export Promotion Capital Goods (EPCG) Authorisations has been extended from 18 months to 24 months. DGFT Public Notice No. 47/2015-20, dated 16-1 1-2018 while amending Para 2.16 of the FTP Handbook of Procedures Vol. 1, also states that import validity period of EPCG Authorisations which have been issued prior to 16-11-2018 and whose validity has not expired on this date, shall also be extended to 24 months from the date of the issuance of the Authorisation.

The date for implementation of Track and Trace system for export of drug formulations has been extended up to 1-7-2019. The extension is with respect to maintaining the Parent-Child relationship in packaging levels and its uploading on the Central Portal, for both SSI and non- SSI manufactured drugs. Para 2.90 A (vi) and (vii) of the FTP Handbook of Procedure 2015-20 has been amended in this regard by DGFT Public Notice No. 43/2015-2020, dated 1-1 1-2018. The system was to be implemented by 15-1 1-2018.

Madras High Court has held that the time limit under which the new shipper review investigation must be completed should be read into Rule 22 of the Customs Tariff (Identification, Assessment and Collection of Anti-Dumping Duty of AntiDumping Duty on Dumped Articles and for Determination of Injury) Rules, 1995 which does not prescribe any time limit. The High Court in this regard perused the provisions of Article 9.5 of the WTO's Anti-Dumping Agreement which specified that this type of review has to be carried out on an accelerated basis, compared to normal duty assessment. It noted that the WTO agreement clearly stipulated that the period taken for these assessments cannot exceed the original investigation.

Reliance in this regard was also placed on the communications from India regarding reviews specified in Rule 22, where India had stated that the term "periodical reviews" in Rule 22 implies accelerated reviews. It was held that the Court cannot interpret Rule 22 in such a way that there is no time period fixed for the purpose of carrying out the exercise in Rule 22.