In re: Hurricane Harvey, inverse condemnation and potential subrogation actions

On August 25, 2017, Hurricane Harvey made landfall near Rockport, Texas as a Category 4 Atlantic hurricane. It then stalled over Houston. After landfall, winds diminished but precipitation did not, and over the next four days, the wettest tropical cyclone in the United States’ recorded history dropped an unprecedented amount of rain on Houston and environs.

In order to manage the stress on the city’s reservoirs, the Army Corps of Engineers engaged in “controlled release” of water from the Addicks and Barker reservoirs, which water caused flooding to areas located downstream of the reservoirs. The flooding caused by these controlled releases was extensive and largely in areas outside of demarcated flood plains. 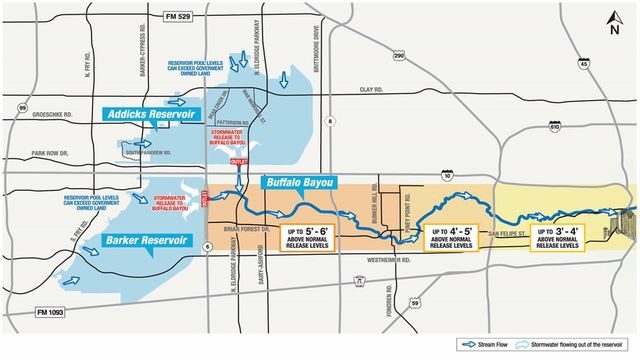 The purpose of this Whitepaper is to analyze the statutory framework and existing decisional law relating to potential subrogation causes of action against governmental entities in connection with the above-described events.

The Fifth Amendment to the U.S. Constitution provides that private property shall not be taken for public use without just compensation. It applies to states through the Fourteenth Amendment. As early as 1872, the U.S. Supreme Court found that “where real estate is actually invaded by superinduced additions of water, earth, sand, or other material … so as to effectually destroy or impair its usefulness, it is a taking, within the meaning of the Constitution.” Pumpelly v. Green Bay & Mississippi Canal Co., 80 U.S. 166, 181, 20 L. Ed. 557 (1871).”

When government action leads to a temporary sacrifice of property interests, the issues presented become more complex and subject to fact-specific inquiries. Tahoe-Sierra Pres. Council, Inc. v. Tahoe Reg’l Planning Agency, 535 U.S. 302, 332, 122 S. Ct. 1465, 1484, 152 L. Ed. 2d 517 (2002). In Arkansas Game & Fish Commission v. United States, 568 U.S. 23, 31, 133 S. Ct. 511, 518, L. Ed.2d 417 (2012), the Supreme Court held that “government induced flooding temporary in duration gains no automatic exemption from Taking Clause inspection.” 133 S. Ct. at 523. The Court then identified the factors of analysis for such an inspection: 1) the duration of the invasion, 2) the degree to which the invasion is intended or foreseeable as the result of government action, 3) the character of the land at issue and the owner’s reasonable investment-backed expectations of the property and 4) the severity of the interference. Id. In Arkansas, the Court ultimately found that the Arkansas Game & Fish Commission had made out a prima facie case for inverse condemnation after repeated flooding of a game and forest preserve by the Army Corps of Engineers.

Arkansas concerned several years’ worth of seasonal decisions to alter the flow of water so as to facilitate farming at the expense of forestry but did not concern catastrophic, isolated events. However, federal courts have found that a takings can result from the interplay between public infrastructure and extreme weather. For example, St. Bernard Parish Government v. United States held that the Army Corps of Engineers was liable to the St. Bernard Parish government and individual property owners in New Orleans for widespread flooding in Hurricanes Katrina, Rita, Gustav, Ike, and other tropical storms, which flooding resulted from the construction and poor maintenance of the Mississippi River Gulf Outlet. 121 Fed. Cl. 687 (Fed. Cl. 2015).

To satisfy foreseeability and causation, the St. Bernard plaintiffs had to introduce substantial evidence of precisely how the construction and neglect of the MRGO foreseeably caused flooding.

One of the key factors distinguishing Harvey litigation from either Arkansas or St. Bernard is that Harvey is a single event. Although the balancing test articulated in Arkansas Game and Fish Commission does not categorically bar a takings claim for a single, isolated event, repetition of invasion has been a touted factor of analysis in the relevant case law. For example, both Arkansas Game and Fish Commission and St. Bernard mention the repetition of flooding events as evidence of severity of interference and reason to support a takings. The Arkansas Court even acknowledged that “while a single act may not be enough, a continuance of them in sufficient number and for a sufficient time may prove [a taking]. Every successive trespass adds to the force of the evidence.” 133 S. Ct. at 522–23.

But while numerosity supports a plaintiff’s allegations of severe interference with property rights, recent decisions have rejected a bright-line rule that would require numerous floods before a finding that a temporary takings had occurred. Even though St. Bernard concerned repeated floods from Hurricanes Katrina, Rita, Gustav, and Ike, Judge Braden stated that “a temporary taking may arise from one occasion of flooding, in light of its character.” 121 Fed. Cl. at. 739. Similarly, in a case where spillways were opened to prevent topping levees downriver, the Court of Federal Claims observed that periodicity is one indication of appropriation, but that even a single event might not be an isolated invasion if the flood control facilities that caused the invasion remain in place and if the government reserves the right to flood the property again in the future. Quebedeaux v. United States, 112 Fed. Cl. 317, 323 (Fed. Cl. 2013). The same court held that “[c]ounting floods is not the controlling consideration. The question, rather, is whether defendant has appropriated an interest for itself in the subject property — and that inquiry requires an examination of multiple factors, certainly beyond whether actual flooding has occurred once, twice, or even a dozen times.” Id. at 324. St. Bernard and Quebedeaux suggest that so long as the reservoirs remain in place and the policy considerations that led to controlled releases remain valid, the properties that were flooded remain subject to invasion and this potentiality figures in the calculus.

Texas courts presented with federal and state inverse condemnation claims “consider the federal and state takings claims together, as the analysis for both is complementary.” Hearts Bluff Game Ranch, Inc. v. State, 381 S.W.3d 468, 477 (Tex. 2012). Even so, Texas has developed its own takings jurisprudence and claims resulting from Harvey could be filed under Article 2, Section 17 of the Texas Constitution, which provides that that “[n]o person’s property shall be taken, damaged or destroyed for or applied to public use without adequate compensation being made, unless by the consent of such person.” To win on an inverse condemnation claim, a putative plaintiff would need to prove “(1) the State intentionally performed certain acts, (2) that resulted in a ‘taking’ or damaging of property, (3) for public use.” Gen. Servs. Comm’n v. LittleTex Insulation Co., Inc., 39 S.W.3d 591, 598 (Tex. 2001).

Like the federal jurisprudence, the analysis of what sort of temporary invasion rises to the level of a taking is fact specific rather than bright line. For example, Tarrant Regional Water District v. Gragg held that “[w]hile nonrecurrent flooding may cause damage, a single flood event does not generally rise to the level of a taking.” 151 S.W.3d 546, 555 (Tex. 2004), holding modified by Gilbert Wheeler, Inc. v. Enbridge Pipelines (E. Texas), L.P., 449 S.W.3d 474 (Tex. 2014). Recent cases have focused on the qualifier “generally” in the Gragg ruling to hold that a single event can plausibly rise to the level of a takings. A Texas appeals court facing a claim of inverse condemnation from a single flood held that “recurrence goes to the merits of the plaintiffs’ claims and is not a pleading requirement to invoke the trial court’s jurisdiction.” City of El Paso v. Mazie’s L.P., 408 S.W.3d 13, 25 (Tex. App. 2012). Similarly, in City of Socorro v. Campos, the plaintiffs were found to have adequately pled a takings claim even though the flooding was limited to a single instance. 510 S.W.3d 121, 130 (Tex. App. 2016), review denied (June 16, 2017). Neither Campos nor Mazie’s evaluated the merits of the plaintiffs claim — both rulings limited their analysis to the question of whether the plaintiffs met Texas’ lenient notice pleading standard. Even so, the language of Campos is particularly clear when it states that “[t]o the extent Toomey stands for the proposition that a plaintiff must allege more than a single flooding event, we decline to follow it. Assuming a governmental entity has the requisite intent as outlined in Gragg, it should not be accorded one free bite (or as here, one free flood).” 510 S.W.3d at 132.

The state law analysis has a seeming contradiction. Toomey v. Texas Department of Transportation states that “[u]nder article I, section 17 of the Texas Constitution, there is no taking when damage is temporary and it results from an isolated event, as opposed to being permanent, frequent, or inevitable due to a fixed condition.” WL 1153035, at 4. This view was roundly rejected by the Texas appeals courts that decided Mazie’s and Campos but Toomey appeals to a Texas Supreme Court ruling for support and might be an accurate statement of the law. The Toomey opinion cites to Brazos River Auth. v. City of Graham, in which the construction of a dam led to siltation that flooded a sewage treatment plant numerous times but flooded a water treatment plant only once. 163 Tex. 167, 354 S.W.2d 99 (1961), holding modified by Gilbert Wheeler, Inc. v. Enbridge Pipelines (E. Texas), L.P., 449 S.W.3d 474 (Tex. 2014). Brazos held that,

there is a species of damage to land that is probably nonrecurring, or at least may not recur for some substantial length of time. Examples of this type are floods occasioned by extremely heavy or unprecedented rainfalls, coupled with some obstruction of a water course. The person responsible for the obstruction of the water course may be liable, in part at least, for the damages caused by the type of flood described. He would not however be liable to the same extent that he would be in cases of continuous or repeated floodings of land. 163 Tex. At 179.

The easiest way to reconcile the apparent contradiction is to contend a single event such as Harvey is compensable under the Texas Constitution as damage to property for which costs to repair rather than loss of market value applies since the property was not “taken.”

Neither federal nor Texas law provide clear guidance on whether government decisions arising from a singularly damaging event like Harvey can qualify as inverse condemnations. Where temporary invasion of property is concerned, both federal and Texas law reject bright-line rules and instead instruct courts to conduct probing factual inquiries and employ a multifactor test to decide whether a taking has occurred when the invasion to property is not permanent. Recent federal cases suggest that the Federal Court of Claims is willing to entertain the possibility that a single event can rise to the level of a taking provided that the factors of consideration are met. In Texas, a Supreme Court case dating back more than a half century implies that more than one invasion is needed for flooding to become a taking, but recent appeals courts decisions reject this implication and state outright that a single flood can be a taking provided the plaintiffs prove the elements of an inverse condemnation claim. The broader scope of the Texas Constitution also supports the view that the government is responsible to pay just compensation for property damaged for public use even if not taken.

With the number of class actions being filed, it is prudent for insurers with insureds who were located in the area flooded by release from the dams to investigate and collect the facts in order to preserve the inverse condemnation claims that may succeed as outlined above.