In ruling NY N323181 (January 6, 2022), Customs and Border Protection (CBP) discussed the country of origin of LiteCure Deep Tissue Laser Therapy Units. The deep tissue laser therapy units are used by both doctors and veterinarians to treat acute and chronic conditions. The lasers in the unit are Class 4 lasers – also known as High Intensity Lasers (HIL) with power of 500 mW or more. Each laser therapy un

The laser module and hand piece each consist of the following: 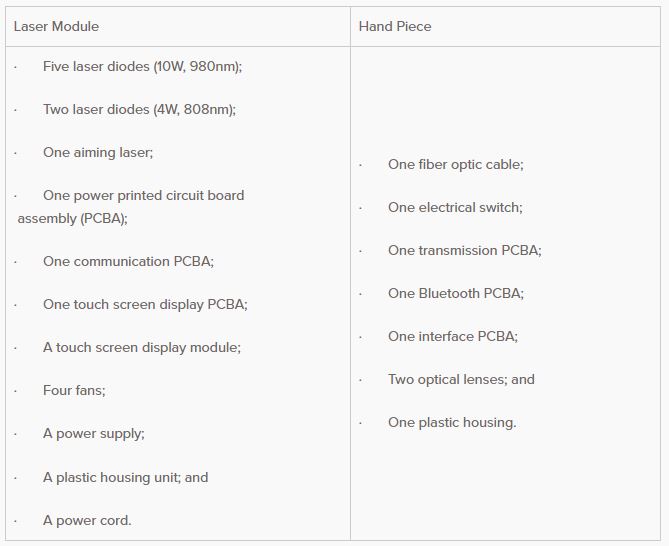 For the laser model, the laser diodes originated from Germany while the aiming laser, power PCBA, and communication PCBA were produced in the United States. The touch screen display module comes form Taiwan and the rest of the items come from China. Alternatively, for the hand piece, the fiber optic cable, optical lenses, and three PCBAs come from the U.S. while the electrical switch and plastic housing are products of China.

In China, U.S. firmware is loaded in the communication, touch screen display, and Bluetooth PCBAs. The touch screen display, fans, power supply, PCBAs, metal brackets, and aiming laser are then screwed and attached inside the laser module housing. The laser diodes are next mounted to a heatsink and connected to the power PCBA inside the unit. Once all the laser module components are connected, initial testing is performed to make sure the laser module works correctly. Once the laser module passes the test, the module is sealed and a protection coating is added to the optical lenses. The lenses, PCBAs, and metal parts are installed and connected inside the handpiece module housing. Once the hand piece module is tested and closed, the assembled therapy unit (laser module + hand piece) undergoes final testing and quality control.

In its determination, CBP notes that, as defined under 19 CFR 134.1(b), the country of origin is the “country of manufacture, production, or growth of any article of foreign origin entering the United States. Further work or material added to an article in another country must effect a substantial transformation in order to render such other country the ‘country of origin’ within the meaning of this part.” CBP also established that “substantial transformation” takes place when a particular product “emerges from a process with a new name, character or use different from that possessed by the article prior to processing.” First, the agency argued that the assembly operations that took place in China are not complex enough to change the predetermined functions of the imported products – such as the laser diodes, PCBAs, touch screen display, and optical cables. Neither do these products undergo a change in name, character, or use as a result of the assembly process. Next, CBP found that the laser diodes provide the essence of the laser therapy unit. CBP argued that the sole function of the laser therapy units is to heal and treat damaged tissue through a beam of light, which is exclusively produced by the laser diodes. As such, CBP determined that the country of origin of the LiteCure Laser Therapy Unit is Germany.