The hotel management agreement is the legal document which deals with the relationship between a hotel owner and an operator. Typically these documents do not change significantly between jurisdictions.

Hotel operating companies tend to insist that agreements are documented based upon their standard templates which tend to be lengthy and complex. For an industry where the profits and returns depend so much on the terms of this legal document it is interesting to speculate why more attention is not given to the detailed crafting of this document.

At the Hotel Investment Conference held in Hong Kong in October we convened a session together with a panel of industry experts to discuss this topic. The audience consisted of over 230 conference participants. Judging by the number of attending participants, there was clearly significant interest in the topic.

What's changed over the last 20 years?

Views will differ as to the most significant changes. We proposed the following list to our audience in no particular order.

The impact this has on their approach to the negotiation of the commercial terms of a hotel management agreement is profound. In short, these operators strive for predictable long term income streams with no payment obligations or as few payment obligations as possible.

Arguably the more successful hotel management companies comprise a small number of North American based companies together with an English company and a French company.

No Asian based hotel management company has yet emerged to match the might of the incumbents.

In Asia, generally speaking, we have seen a significant reduction in the term of most hotel management agreements.

These days Management Agreements generally have a term of around 10 – 15 years.

Traditionally, fees have comprised of Base Fees (based on Gross Revenue) and Incentive Fees (based on Gross Operating Profit) – there has been no change in this formulation or any indication that it will change. Over time the quantum of fees has arguably diminished. Base fees tend to be around 1% - 1.5% of Gross Revenue. Operators remain reluctant to make financial contributions but will do so in a highly competitive and highly sought after opportunity. These financial contributions are generally structured as loans rather than outright payments.

Over time there have been relatively meagre attempts to introduce a regime to allow for premature termination of hotel management agreements to deal with the prospect of sustained and significant under performance. Provisions include performance based and without cause on sale or at any time.

The performance based provisions commonly in use have proved ineffectual. There has been no significant push by owners to deal with this issue.

Evolution or Revolution - Areas for Consideration

We presented to the audience our views as to the most significant areas which will either lead to an evolution or a revolution in the development of hotel management agreements. Our industry experts commented as follows.

1. Length and Complexity of Management Agreements

We posed the question as to what would be the competitive advantage of a simple and short agreement issued by an operator – particularly a new entrant.

Our industry experts generally felt that the introduction of such an agreement would not significantly impact on an owner's decision to go with one operator rather than another operator even if there was little else to differentiate these proposed operators. This view seemed somewhat inconsistent with industry feedback we had received criticising the size and complexity of hotel management agreements generally.

2. Allocation of risk between Owners and Operators

Traditionally the risk of hotel operations rests with the owner. Operators are prepared to accept limited risk in certain circumstances. Generally, the degree of risk that operators have been prepared to accept has not changed significantly in many years.

Could we see a major shift in the allocation of risk and what rewards would this produce?

The general consensus of our industry experts was that operators would only accept additional risk if there was no alternative. As competition increased, particularly with trophy hotels, operators would be prepared to increase risk, perhaps substantially, and would seek to gain greater benefits in return subject to competitive constraints. It was doubtful that we would see a wholesale move back to the situation where operators became significant hotels owners once again.

Traditionally an operator agrees to provide the same brand for the term of the management agreement. Many major operating companies have a proliferation of brands which they may wish to cull from time to time.

Our industry experts felt it was difficult, but not impossible, to foresee a situation where an operator would have the unilateral right to change a brand during the term of a management agreement. Equally it was difficult to foresee what impact this would have on other key provisions except that it would potentially have a tendency to shorten agreement terms and perhaps increase pressure to achieve meaningful premature termination provisions if the new brand did not meet owner expectations.

Operators are very reluctant to provide owners with any significant and effective premature termination rights. Historically, owners have generally accepted this position.

What would be the consequence if owners became more aggressive with premature termination rights and what benefits could this produce for operators?

Our industry experts generally considered that there was an increasing push on the part of owners. particularly in highly competitive operator selections, to agree to an effective premature termination mechanism if the operator demonstrated sustained and significant underperformance.

Traditionally operators have not had a stake in the proceeds of a hotel sale. There has been an ongoing discussion that the relationship between the parties would be enhanced if such a stake was provided to an operator.

How would an operator fashion a stake in a hotel sale and what impact could it have for other management agreement terms?

Our industry experts generally considered that owners would have no appetite to open discussions on this topic because of philosophical objections and the practical difficulties in devising a formula which effectively measured the impact operator performance had on achieved sale value.

Over time the term of hotel management agreements has generally shortened. Operators generally would prefer the longest term which can be negotiated.

What concessions would operators need to make to secure a longer term?

Our industry experts were generally of the view that it would be very difficult to secure significantly longer terms except in circumstances where such agreements could be prematurely terminated if the owner considers that the operator's performance does not meet its expectations in a material aspect.

As the most extreme scenario to impact on the future of the hotel management agreement (and the one where the contributing factors are the most difficult to identify) we sought to deal with this potential outcome in isolation.

In our view potential contributing factors include:

1. Airbnb and other disruptors

Over time will the impact of Airbnb be substantial or marginal? Are there any other disruptors emerging or likely to emerge?

Our industry experts considered that the operators would simply need to continue to fashion and refine their accommodation offering taking into consideration the distinctive benefits that Airbnb offers the consumer. Operators would also need to consider whether they added an Airbnb type offering to the other accommodation offerings which constituted their traditional business model. Whilst our experts could not identify specific other emerging disruptors, there was general consensus that others would emerge over time.

Will the traditional attributes of chain hotels be overshadowed by perceived benefits offered by single individually managed hotels?

Our industry experts considered that the challenge for chain operators is to continue to refine a distinctive service offering which creates an alternative to the single hotels. Some chain operators would be more successful than others in dealing with this challenge.

Will the impact of OTAs over time be game changing or marginal?

Our industry experts generally agreed that OTAs have had a significant impact on the accommodation industry's financial landscape. Like the previous topic, the impact of OTAs will not be uniform and those chain operators who are successful at innovation and differentiation would have less difficulty with the impact of the OTAs over time.

Will robotics play a significant part in the accommodation industry and what impact will it have on managed hotels?

Our industry experts generally agreed that there would be a role for robotics but human contact would remain a significant attribute in the hotel industry especially with luxury accommodation.

Have we omitted a major contributing factor from the list?

Our industry experts generally agreed that we probably had omitted other major contributing factors but could not specifically identify what these were.

We took the opportunity to poll the audience using a mobile phone app which allowed audience members to vote on a confidential basis.

In 20 years time, do you think Hotel Management Agreements will have: 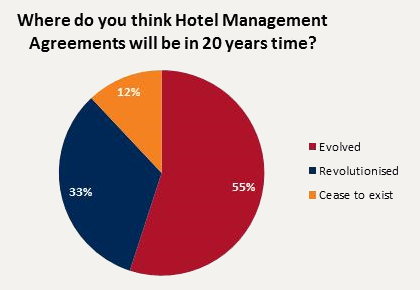 Over half the audience expected hotel management agreements to evolve. Interestingly though, one in three respondents considered that there would be revolutionary developments. Our sense is that the audience felt that the likelihood of revolutionary change was greater than the consensus among our industry experts.

What has been the biggest change impacting on hotel management agreements over the last 20 years? 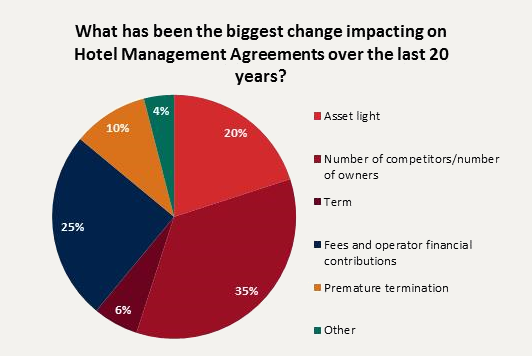 Audience responses indicate that the number of competitors/number of owners mix has been the most significant contributing factor (35%) to the development of hotel management agreements in the recent past. Of note is the view shared by a comparatively small proportion of the audience (4%) that the list we proposed excluded one or more significant contribution factors.