In April, the Financial Stability Board (FSB) published, in response to a request from the G20, its awaited consultation on the regulatory, supervisory and oversight challenges raised by “global stablecoins” (GSCs). Given the FSB’s remit, the focus of the consultation is on the impact of GSC arrangements on international financial stability, together with market integrity and consumer protection. It expressly does not address matters ranging from monetary policy, monetary sovereignty and currency substitution to data privacy, competition or taxation.

Overview: what are global stablecoins and why do they raise financial stability concerns for the FSB?

Nature of the instrument and arrangement

The FSB defines stablecoins as “a crypto-asset that aims to maintain a stable value relative to a specified asset, or a pool or basket of assets”.(The stabilisation mechanism of a stablecoin could alternatively be algorithm-based, attempting to maintain a stable value via protocols that provide for the increase or decrease of the supply of stablecoins in response to changes in demand.) A GSC is a stablecoin “with a potential reach and adoption across multiple jurisdictions and the potential to achieve substantial volume”. 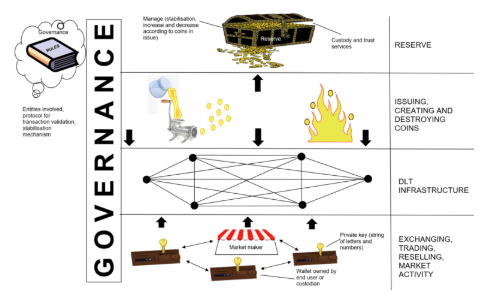 Illustration of functions and activities within a stablecoin arrangement

Where a GSC has achieved systemic importance, GSC arrangements could affect financial stability in a number of ways. For example, any fluctuations in value could affect spending decisions and economic activity. If widely used for payments, any operational disruption could significantly impact economic activity and financial system functioning; and exposures of financial institutions might increase in scale and change in nature – particularly if they perform multiple roles in a GSC arrangement (e.g., as resellers, wallet providers, managers or custodians/trustees of reserve assets). Large-scale redemptions of GSCs could mimic the impact of bank runs.

Given the potential impact on financial stability, the FSB is concerned about how GSC arrangements are designed and performed, and whether they can withstand shocks. It notes that:

“… depending on the facts and circumstances, the decentralised nature of GSC arrangements could pose governance challenges; stabilisation mechanisms and redemption arrangements could pose market, liquidity and credit risks; and, the infrastructure and technology used for recording transactions, and accessing, transferring and exchanging coins could pose operational and cyber- security risks“.

Currently, regulators tend to apply existing regulation to the activities of, and entities involved in, GSC arrangements. This is in line with the “same business, same risks, same rules” principle, and indeed, if GSCs take hold, then existing regulation may adapt to accommodate them. (Across the 51 jurisdictions that responded to the FSB’s survey, the “most common approach [to regulatory classification] is to identify the activity performed by a stablecoin arrangement and the participants involved, and apply the relevant existing regulation for that activity or entity according to the “same business, same risks, same rules” principle”.)

As they stand, however, existing regulatory regimes are not sufficient to capture GSC arrangements in a holistic way and would not address all risks associated with them. To illustrate, the functions and activities that are most likely in scope of current regulation include issuance and redemption of stablecoins, managing reserve assets, providing custody/trust services for reserve assets, exchanging and trading, and storing the private keys for wallets. Governance and control over the whole stablecoin arrangement, operation of the infrastructure of a stablecoin arrangement and the validation of transactions tend to fall outside the scope of existing regulation, however.

There are two main obstacles that can be identified within the gaps and challenges identified by the FSB:

The FSB proposes 10 high-level recommendations (see box below) to promote consistent and effective regulation, supervision and oversight. The intention is that the recommendations support responsible innovation (by being technology neutral) and allow domestic flexibility in implementation, whilst mitigating the risks arising from GSCs that are used as a means of payment and/or store of value. Whilst the recommendations are addressed to national authorities, substantively they split between obligations on authorities and requirements applicable to GSC arrangements. 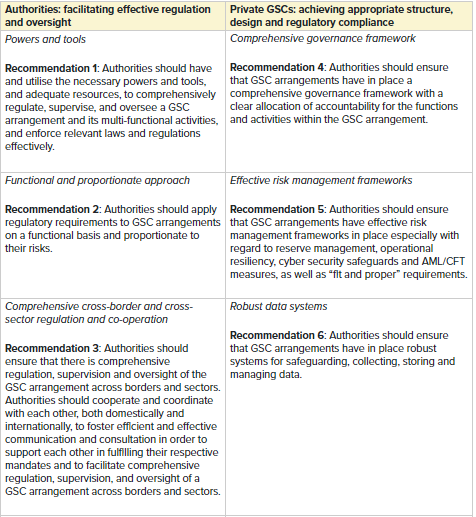 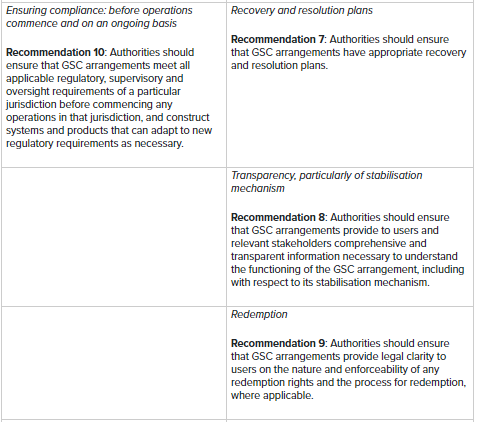 An important challenge will be to give national authorities the ability to supervise and oversee a stablecoin arrangement holistically, rather than in a piecemeal framework based on its component functions and activities. This is likely to require legislative change, followed by a fundamental change in regulatory approach. Authorities will need to consider their own regulatory frameworks and how the arrangement interacts across jurisdictions. Arrangements for information-sharing and co-operation will be needed. Arrangements akin to those in place for Global Systemically Important Financial Institutions (G-SIFIs) may be an appropriate model. Traditional cross- jurisdictional supervisory approaches will generally not work when applied to GSC arrangements, for two reasons.

First, stablecoin arrangements may be a loose network of unrelated entities only held together by common policies, standards and agreements about respective roles. This would present challenges for identifying the “home” jurisdiction. Secondly, functions of stablecoin arrangements are a hybrid of traditional financial groups and financial market infrastructures (FMIs).

While there are existing examples of internationally-agreed standards that apply in a cross-border context, e.g., the CPMI/IOSCO Principles for Financial Market Infrastructures, the challenge will be to move from a patchwork approach to a model where all the various aspects can be dealt with together to ensure that from the outset – and on an ongoing basis – a GSC arrangement can function appropriately in the economy. The FSB envisages cooperation arrangements in different forms, including supervisory colleges, fora or networks. In terms of structure, the FSB refers to general bilateral and multilateral memoranda of understanding covering cooperation and information sharing, and crisis management and resolution, which are complemented by single focus mechanisms (e.g., on cyber security).

Prior to mid-2019, the prospect of a detailed regulatory regime being developed for stablecoins might have been met with a degree of surprise and scepticism.

Similar to the rules on traditional outsourcing, where a GSC arrangement relies upon a third party, the GSC governance body must demonstrate that this reliance does not impede its ability to meet regulatory requirements and expectations. However, it is unclear what would be caught here given the separate entities with loose connections that may form part of a GSC arrangement.

Similarly, all functions and activities of GSC arrangements must be subject to appropriate risk management. A GSC arrangement will need appropriate policies, procedures and processes, covering at least the following risks: operational; AML/CFT; cyber; market risks; and those idiosyncratic risks presented by permissionless or anonymous networks. These risk management arrangements will need to be evidenced prior to commencing operations (in line with recommendation 10).

Under the heading of ‘risk management’, four further categories of requirements are set out:

Data management systems within GSC arrangements will need to satisfy certain requirements, including:

GSC arrangements will need to have in place plans to support an orderly wind-down or resolution, which should include continuity or recovery of any critical functions and activities within the GSC arrangement. The implementation of these plans will need further consideration, taking into account the entities within a GSC arrangement and their geographical distribution.

A lack of transparency has been a cause of failure in stablecoins to date, particularly where it leads to a lack of confidence. This recommendation relies on transparency to bolster confidence and mitigate failure risk. There is an extensive list of aspects of a GSC arrangement to be disclosed, including:

This recommendation concerns not only legal clarity, but also transparency, in relation to redemption rights. Redemption rights may not feature in all GSC arrangements. To the extent they do, they will have to comply with the following requirements:

On a continuing basis:

First published on Thomson Reuters Regulatory Intelligence on 13 May 2020