On 18 January 2018, Phillips Ormonde Fitzpatrick filed an application on behalf of Ferrari to register its 488 Pista vehicle design. The 488 Pista is an updated model of the ‘488’ family of designs. Upon examination of the application, the Examiner asserted the 488 Pista was not distinctive because it was substantially similar in overall impression to several publications depicting the older Ferrari 488 Spider vehicle. Written submissions were filed in response to the examination report in which key and prominent features were argued to be distinguishing. In a subsequent examination report the Examiner maintained that the similarities between the respective designs were ‘very clear’. The 488 Pista Design was considered a ‘refinement of the existing designs’ and not substantially different in overall impression to the 488 Spider.

A request for a hearing was subsequently filed and the matter was heard on 19 March 2020. A decision issued on 14 July 2020. Chris Schlicht, Alexis Keating and Peter Wassouf were involved in the preparation of hearing submissions and represented Ferrari in the hearing.

The Ferrari hearing submissions, included a declaration from Anthony Moss, a founder and director of Ultimate Driving Tours (UDT). Anthony has extensive experience in the automotive and prestige car industry, and in his role with UDT coordinates luxury car tours around the world.

In the submissions it was argued that the 488 Pista design relates to a sub-category of performance vehicles, and that a skilled and informed user possesses a detailed understanding of the features relevant to a car’s performance.

With a highly developed prior art field, the Hearing Officer agreed with Ferrari’s submission that an informed user of performance vehicles appreciates differences that may otherwise be considered subtle.

In considering the similarities and differences between the designs, the Hearing Officer considered the designer’s freedom to innovate. It was acknowledged that cars do contain inherent features, such as wheels, doors, bonnets and mirrors, and these features restrict a designer’s freedom to innovate. The Hearing Officer acknowledged that in the field of performance cars the informed user would appreciate there were specific performance parameters which dictate the design of certain aspects of a vehicle, thus providing further functional design constraints. It was found that the informed user would apportion more weight to areas where the designer has freedom to innovate, which in this specific case was the front and rear section of the vehicles.

In considering the comprehensive list of differences submitted by Ferrari, it was found that substantial visual differences existed in the front and rear of the 488 Pista vehicle design compared to the 488 Spider prior art vehicle. For example, an air damn and air scoop running through the front bumper and up through the bonnet of the 488 pista, which did not appear in the prior art citations was considered to be a prominent difference. The air damns and the wrap around diffusers in the rear of the 488 Pista were also considered prominent and distinct features. The substantial visual differences in combination with other minor differences identified by Ferrari were in combination held to significantly alter the overall impression of the 488 Pista. 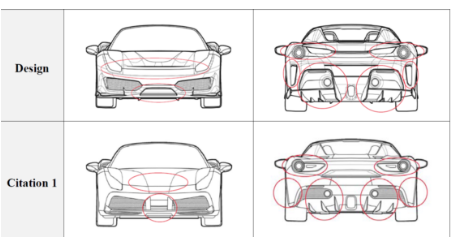 With the benefit of a declaration made by skilled and informed user, Ferrari was able to support its submissions and overturn the Examiner’s original objections. Such declarations are not restricted to hearings, and we encourage Registration owners to consider filing declarations during the examination process if an Examiner maintains certain distinctiveness objections.

Our Designs Team at Phillips Ormonde Fitzpatrick are here to assist you with the prosecution and management of Australian and international design applications. Please do not hesitate to contact us should you have any questions relating to Design protection in Australia or overseas.