Reverse factoring has attracted significant media attention and government scrutiny in recent months. The AFR has reported recently that reverse factoring is being utilised by major corporations across a variety of sectors, including construction, energy & resources and telecommunications, as a means to improve liquidity and to offer expedited payment of invoices.

The practice has also raised concerns amongst accountants given its potential to mask total debt. Whilst some companies have well established reverse factoring procedures, others have recently pulled back from adoption of reverse factoring as a result of media, government and public pressure.

Both Principals and Head Contractors may wish to consider adoption of reverse factoring as a liquidity tool. Conversely, contractors, subcontractors and suppliers may be "invited" to enter into reverse factoring arrangements and need to understand both the cashflow implications and their legal rights.

One important factor which appears to have been overlooked in the recent media coverage is the interaction between reverse factoring as the proposed solution for extended contractor payment regimes on the one hand and, on the other, the operation of mandatory maximum payment provisions under Security of Payment (SOP) legislation applicable to the performance of construction work and the supply of related goods and services which apply in some jurisdictions.

This article explains how reverse factoring operates and considers the rights and options available to Principals, Head Contractors and subcontractors considering adoption of reverse factoring (including the operation of mandatory maximum payment periods under legislation which override the imposition of extended payment durations proffered as the alternative to reverse factoring).

2. What is Reverse Factoring?

In a traditional invoicing arrangement the supplying party sends an invoice to the purchaser, which then pays the supplier within the payment period specified in the contract (see Figure 1).

Reverse factoring interposes a third party Financier, which undertakes to pay the invoices faster than the purchaser would otherwise do. For example, a major construction company working with a large number of subcontractors may be under pressure to "manage cash flows as they work on tens of billions of dollars of infrastructure projects". 1 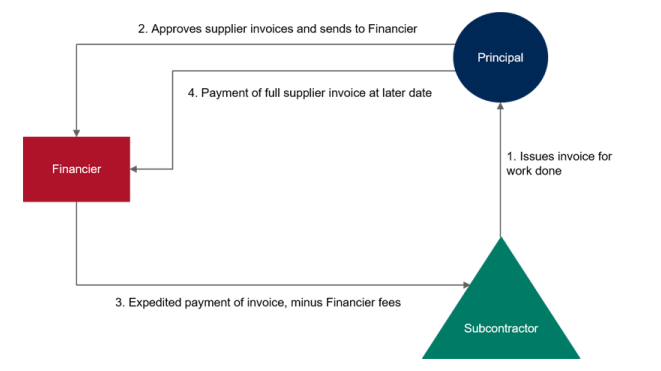 As reported by the AFR, a similar arrangement was recently established by CIMIC and implemented by a number of its subsidiaries. CIMIC is reported as having factored $1.99 billion in debts as at June 2019. CIMIC's 'early payment program' involves a third party Financer which is responsible for the payment of expedited, but discounted, invoices to suppliers. Under CIMIC's procedures, the supplier will receive payment of a discounted invoice from the Financier within 10 days from rendering its invoice. Payment within 10 days is shorter than the period provided by any SOP legislation.

Alternatively, the AFR article reports that CIMIC offers payment terms extending to up to 90 days for payment of an invoice if the supplier chooses to instead receive payment of the full amount of the invoice from the CIMIC company. It is not clear from the article whether these extended payment periods apply to ‘construction work’ or ‘related goods and services’ subject to SOP legislation, or are restricted to supplies that are not subject to SOP legislation.

However, the Security of Payment (SOP) legislation in at least four Australian jurisdictions, including NSW and Queensland, entitles subcontractors and suppliers to payment within set statutory periods significantly shorter than those offered in relevant contracts.

Over the last 20 years each Australian state and territory has enacted SOP legislation. The expressed intention of this legislation was to ensure prompt payment for construction work and provision of related goods and services in accordance with the philosophy that 'cashflow is the lifeblood of the industry'. SOP laws include provisions regarding when a payment claim invoice becomes due and payable. The laws are not, however, uniform. Some jurisdictions allow the parties freedom of contract in determining when invoices will be due for payment, and only mandate a default due date for payment where the contract remains silent in relation to payment duration.

Four Australian jurisdictions, however, have much stricter rules in relation to the due date for payment which significantly reduce the perceived advantages of reverse factoring for suppliers in the construction industry.

Legislation in each of NSW, Queensland, Western Australia and Northern Territory includes provisions which mandate payment within a timeframe significantly shorter than that offered by Principals and Head Contractors in the typical reverse factoring scenario. The statutory timeframe will apply irrespective of the terms agreed in the construction contract.

In Queensland, the relevant provisions are not contained in SOP legislation, but instead in the Queensland Building and Construction Commission (or QBCC) Act 1991, which states that any contractual provision that allows payment in a 'construction trade contract' or subcontract later than 25 Business Days from receipt is void. It is void in a 'commercial building contract' if it allows for payment later than 15 Business Days after receipt of the invoice. Furthermore, if the contract is silent regarding payment duration, the payment must be made within 10 Business Days after the date on which a payment claim has been made. Failure to pay by the due date will render the Principal/Head Contractor liable to pay interest in addition to the claimed amounts.

In the Northern Territory, where a contract provides that payment may be made more than 30 working days after a payment claim is received, the clause will automatically be amended to be read as requiring payment to be made within 30 working days.

The spread of reverse factoring practices and the consequent media attention may, in fact, have the effect of increasing industry demands for adoption of similar maximum payment duration provisions in the other jurisdictions where no such restrictions exist currently.

If extended payment periods were, however, to be imposed in the construction sector, then some contractors, subcontractors and suppliers may choose not to exercise their rights to demand payment within the periods mandated by legislation, and instead accept payment of a reduced amount on a reverse factored basis out of concern that they may lose future project opportunities with the relevant counterparty if they were to insist on their statutory entitlement to prompt payment. Alternatively, some smaller subcontractors and suppliers may simply not be aware of the prompt payment provisions under the relevant SOP and QBCC legislation.

For Principals and Head Contractors, reverse factoring remains a potentially attractive option to offer suppliers when contrasted with the delayed payment provisions which they can offer in jurisdictions other than NSW, Queensland, Western Australia and the Northern Territory or to offer payment durations shorter than those mandated by SOP and QBCC legislation.

For subcontractors and suppliers, SOP legislation in some jurisdictions allows suspension of work or the supply of goods if invoices are not paid within time. In NSW and Queensland, failure to pay the subcontractor/supplier within that period entitles the subcontractor/supplier to suspend work or the supply of goods in accordance with the relevant SOP legislation 2 and to claim interest on the unpaid amount. 3 In Western Australia and the Northern Territory this suspension option is not available, as subcontractors/suppliers will only be entitled to suspend works or supply if the Principal fails to pay in accordance with the determination made by an adjudicator.

Companies involved in construction projects should weigh the perceived benefits of adoption of reverse factoring practices carefully, including consideration of the impact of existing statutory rights which mandate prompt payment. Especially in NSW, Queensland, Western Australia and the Northern Territory, Principals/Head Contractors do not have the option of delaying payment by up to 90 days notwithstanding the terms of the subcontract or supply agreement. Companies should therefore be aware of the mandatory payment periods enshrined in legislation and should also be prepared for the growing scrutiny in relation to use of reverse factoring.