If patents are an economic tool driving innovation, why don’t Australians use them?

It’s often said that Australians punch above their weight in science and innovation. In a November 2014 report of the Office of the Chief Scientist benchmarking Australia in science technology engineering and maths, Australia ranked tenth for the sheer number of STEM publications, 14th for citation rate and 8th for per capita contribution to the top 1% cited natural science and engineering publications.

Why is it then that on data presented here, Australia ranks below all those measures at 17th among a list of comparable countries in converting innovation into patent assets?

Is this because Australian innovation is less worthy of patenting compared to foreign innovation? Unlikely, but the underlying reasons for the difference are complex, and are perhaps reflected in one or more of the following:

It is possible that one key factor in the relative poor performance of Australia compared to many of its trading partners in translating innovation into favourable commercial outcomes is a lack of sophistication on the part of both innovators and the Government in dealing with intellectual assets. Australian entities often possess less than adequate IP portfolios that do not parallel company growth and may fall short of having the necessary strength to underpin a viable business case. Australian Government policy perhaps is not focused on driving sustainable, exclusionary, competitive advantage.

Figure 1 compares the number of international patent applications filed in 2015 based on country of origin with the 2015 GDP of the country (Sources: WIPO and World Bank). An international patent application is generally viewed as being filed for an invention of relatively high importance. Using this simple metric it is evident that Australia sits comparatively low in world rankings. 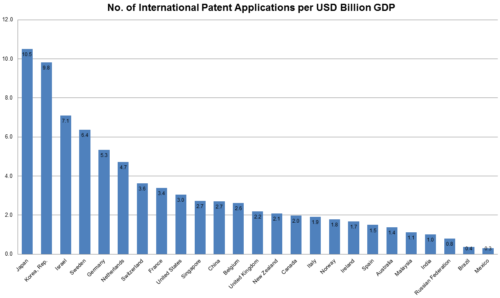 A similar comparison may be made using R&D spend (Source: OECD). While Australia currently spends a relatively healthy 2.1% of GDP on R&D activities, this is not translated into patent filing numbers. Figure 2 illustrates R&D spend of a number of countries as a percentage of GDP and Figure 3 compares the number of international patent applications filed in 2015 based on country of origin with the R&D spend of the country. It is notable that even countries with lower %R&D spend of GDP file significantly more patent applications than Australia. 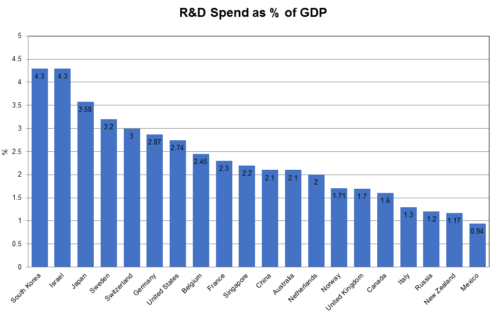 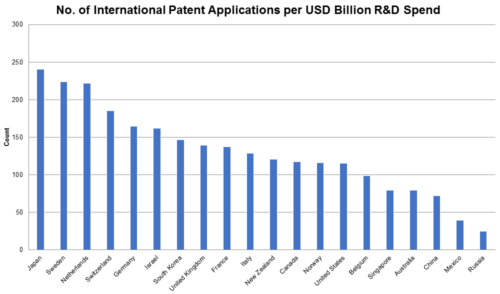 In order for Australia to match some of the superior overseas performers, it likely needs to increase patent filing rates by about 50%. Thinking about how that might be achieved we consider each of the areas highlighted in the introduction.

In contrast to many other countries, Australia lacks large corporations with extensive R&D programs, the outputs of which are translated into patent filings. The majority of Australia’s large companies are in the finance or service sectors and are not involved, to any great extent, in innovative activities. They tend to import and implement technology solutions from overseas. Looking at the countries which have higher rates of patent filings to Australia, it is easy to identify examples of companies which convert R&D activities into patent filings, for example, Microsoft, Samsung, Toyota, Novartis, Philips, etc. It is perhaps a sobering thought that some of these companies individually file more patent applications per year than all Australian based entities combined.

It is unlikely that any of Australia’s existing large companies will, in the short to medium term, transform themselves into global providers of innovative technologies that could fuel a significant increase in patent filings. This would involve a fundamental change in Australian business culture.

Perhaps, then, a solution can be found in the SME sector.

Australia’s economy is largely made up of many SMEs. These companies use the patent system to various degrees, but an underlying theme is present. Many Australian SMEs are small users of the system and tend not to grow their patent portfolios beyond a handful of filings. Significantly, this can lead to gaps in protection and result in portfolios of questionable strength. This often results because the companies reluctantly view patent filing as a business cost rather than an investment for the future.

Unless a company has an absolute knock out innovation it is unlikely that two to three patents are going sufficiently protect against competitive follow on innovation. Most new developments are incremental in nature, typically requiring careful strategic review of how patents can best be utilised to underpin a value proposition.

Australian companies, particularly SMEs, tend to be less well informed about the global developments in their field of endeavor than their overseas counterparts. This is largely due to the absence of systems within the company that can inform and direct future strategy. This lack of knowledge sometimes results in a company pursuing patent filings of low value, which it turn leads to a negative view of the patent system.

However, in today’s data driven world it is quite possible to be well informed about global competitive activities at relatively modest cost, and certainly at significantly lower cost to obtaining patents of relatively low value.

In the author’s personal experience in R&D in multinational companies, knowledge of, and benchmarking against, competitors IP is critical to forward-looking R&D strategy. Predicting and patenting the next technological wave front enables leap frogging of competitor technology and market positioning which can sustain competitive advantage for a company.

Interestingly, Australia stands out in comparison to many other countries, revealing a very high proportion of patent filings which are to universities and other publicly funded institutions. However, this disparity is not particularly due to publicly funded institutions in Australia filing more patent applications than their overseas counterparts. It is, in fact, because very few Australian companies file large numbers of patent applications. 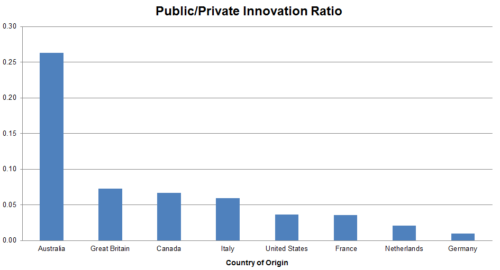 Figure 4 shows that compared to countries conventionally considered as being successful at converting innovation into patent assets and sustainable technological advantage, Australia has a very high rate of public sector patent filing when compared to that of it’s corporate sector.

We question whether the public sector is the right vehicle to take on such responsibility. It is in sharp contrast to Australia’s trading partners where the majority of innovation is privately funded, particularly by large and medium to large corporations.

Should we be concerned?

Australia has a mature economy and a well educated and innovative workforce. However, in terms of patent filing rates, Australia underperforms in comparison to many other countries.

Does this lower rate of patent filing negatively influence the conversion of innovative ideas into favourable commercial outcomes? It is quite likely.

While patents are not the sole means for underpinning commercial success, they are an important part of an overall innovation ecosystem in an organisation that gives confidence that sustained competitive advantage can be achieved.

In Australia, we are good at turning to Government to support innovation through policy and financial incentives. Perhaps it is time that policy settings changed to be more focused on exclusionary rights to competition rather than simply driving science publication. New measures might include “R&D” tax credits for spending on intellectual property, preferential tax rates for innovative manufacturers with IP filings, or the setting of Government bond rates at a higher level for funds set aside for R&D spend.

As Australians we must close the gap between being “good” at innovation and being commercially successful with innovation. A challenge for Australian companies is to invest more in IP and move beyond seeing it as a cost, rather an investment in the future. A challenge for Government is to establish policy settings which reward commercial success rather than simply new science.