Recent cyber-attacks such as the Optus data breach have affected millions of Australians and driven privacy reforms in Australia to move at a record speed. We have previously discussed the world-leading privacy penalty regime and the extended privacy long-arm jurisdiction introduced by the Privacy Legislation Amendment (Enforcement and Other Measures) Bill 2022 (Cth) (Bill) amending Australia’s Privacy Act 1988 (Cth) (Privacy Act).

The Bill passed both Houses of Parliament on 28 November 2022 without major amendments and will be effective following assent by the Governor-General, which is expected to take place imminently.

Various political parties and industrial groups made submissions and recommendations to the Bill. Although not accepted in the final Bill, these submissions provide indications of how Australia’s privacy reform may develop. The Federal Government has committed to revisit the issues raised as part of its ongoing review of the Privacy Act, to be completed by the end of this year.

Key debates over the Bill

The Bill significantly increases the maximum civil penalty for serious or repeated interference with privacy as reflected below: 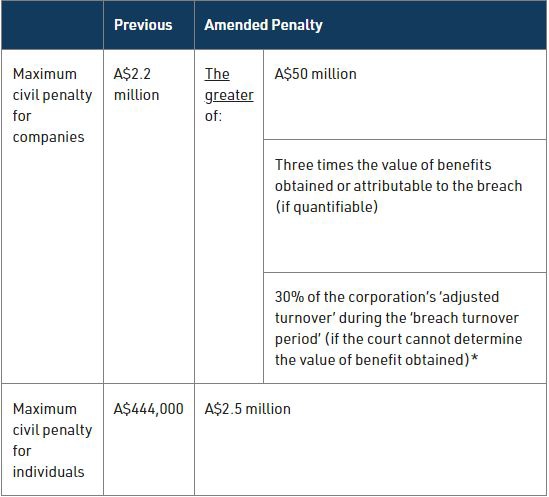 * ‘Adjusted turnover’ means the sum of the value of all supplies made by the entity in connection with Australia. The ‘breach turnover period’ begins at the start of the month in which the offence or contravention occurred or began occurring, and ends at the end of the month in which it ceased – subject to a minimum ‘breach turnover period’ of 12 months.

Submissions to the Bill generally supported the heightened penalty as a necessary increased deterrence for privacy violations. However, there were calls for:

Some submissions considered this change to be unnecessarily broad as it captures all the privacy practices of foreign entities operating in Australia, including those that affect citizens of other nations who do not have any direct connection with Australia.

The Bill provides new powers to the Australian Information Commissioner to issue infringement notices with civil penalty to entities who fail to answer questions or provide information, documents or records. These extended powers were not heavily debated.

A lot has happened in Australia’s privacy space and there is certainly more to come, including the long-awaited reforms to the Privacy Act which may:

The key debates that occurred over the Bill, highlighted above, will also be considered as part of the reform.

Alongside the reforms, the Government is also considering criminalising the payment of ransoms to hackers, with a view to reducing the profitability of cybercrime in Australia.

Once the Government‘s final report containing recommendations for this broader reform is published by the end of 2022, entities should prepare for the upcoming change by: