On 16 July, Treasury released Exposure Draft legislation for the Financial Accountability Regime (FAR)(FAR Bill). While the FAR Bill has some similarities to the Banking Executive Accountability Regime (BEAR) in the Banking Act 1959 (Cth), there are some provisions of the FAR Bill which differ to BEAR and which raise concerns about over-regulation and uncertainty. These issues will be important for APRA-regulated superannuation trustees, life and general insurers, private health insurers, and Authorised Deposit-taking Institutions (ADI) to consider for implementation. Notably, BEAR will be repealed once FAR is in effect for ADIs and non-operating holding companies (NOHC) of ADIs.

In this first in a series of articles on FAR which will appear on FSR Australia Notes, we outline the key proposed features of the FAR Bill and related Treasury consultation documents.

FAR will not impose civil penalty liability on accountable persons. This is a significant change to the position in the January 2020 consultation.

Who is subject to FAR obligations?

FAR will apply in respect to ‘accountable entities’: these are ‘constitutionally covered bodies’ (e.g. bodies corporate which carry on banking business within the meaning of the constitution, other than state banking) which are: 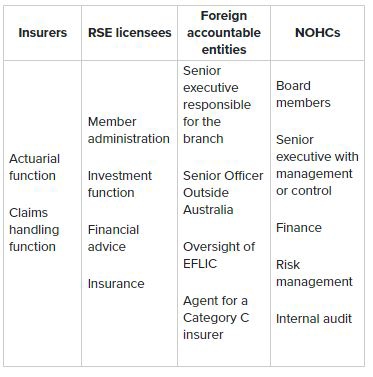 The Information Paper clarifies that in respect to the prescribed positions, “[t]he extended list [of prescribed functions] is not intended to capture middle or lower management who may only have day-to-day responsibility for certain parts or aspects of the accountable entity or its significant related entities”.

What obligations will the FAR Bill impose?

Similar to BEAR, the FAR Bill will apply obligations including in respect to:

What ‘reasonable steps’ can be taken to comply with FAR obligations?

FAR prescribes the following inclusive list of ‘reasonable steps’ that can be taken:

Who has a regulatory role under FAR and what is that role?

Unlike BEAR, for FAR both ASIC and APRA will have a regulatory role. APRA and ASIC must enter into an arrangement relating to the administration of FAR within 6 months of commencement.

When will FAR be introduced into Parliament and when do regulated entities need to comply with FAR?

What regulatory remedies are there for potential non-compliance with FAR?

What are some initial key issues with FAR?

When does consultation finish?

The consultation period ends on 13 August 2021.