When is a Cat not a Cat? When it’s a Caterpillar. Or a Tigercat. Or is it?

Most recently, a dispute in the EU IPO has resulted in Tigercat losing an opposition for its application for “Tigercat”, then losing at the boards of appeal and finally losing before the General Court (https://www.bailii.org/eu/cases/EUECJ/2022/T25121.html).

Tigercat has not obtained the trade mark that it had attempted to and both parties must now be considering their commercial options in the real world (i.e. not just in relation to the register of trade marks). The decision of the General Court will presumably be helpful to Caterpillar in bringing infringement claims in Europe should it choose to do so.

Focus on the Figurative

The decision of the General Court is interesting for a few reasons. One interesting thing is that Caterpillar cited a word mark as well as a figurative mark against Tigercat’s word mark application, but for reasons of ‘procedural efficiency’ at each stage it was the figurative mark that was considered. This makes some sense when you consider that the decision in each case was that there was a likelihood of confusion (i.e. the word mark could only have been more liable to confusion on the analysis that was done), but it does leave the EUIPO and the General Court open to criticism about the way that it interpreted the figurative mark. The figurative mark is that shown below: 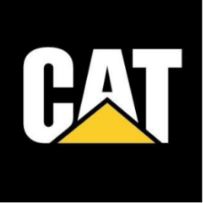 The General Court said that the figurative elements of the mark were “essentially decorative” and had “only a limited impact on the relevant public’s visual perception of the mark”. I think that most practitioners (and probably Caterpillar itself) would consider that the figurative elements of the mark do add something striking to the simple word “cat”, so in this sense it is an unsettling decision and one that was unnecessary for the General Court to have made, given there was a ‘CAT’ word mark in the case .

It also held that, even if the public thought that “CAT” in the earlier mark was an abbreviation of “caterpillar”, the relevant public would also think the same about the word in the mark applied for because of the nature of the goods involved (track type machines). Therefore, they were conceptually similar either way (and because “tiger” does not add much conceptually to “cat”).

Even though the attention of the relevant public was considered to be high, the interdependence of the various factors led the General Court to agree with the Board of Appeal that there was a likelihood of confusion. This was influenced by a finding that the earlier mark had an enhanced level of distinctiveness as well as that the goods were identical and that there was average to high similarity between the marks (visual and phonetic, and conceptual elements respectively).

The Court’s observation that the public with a high level of attention will be more aware of the differences between marks, but will not examine them down to the smallest detail or compare them in minute detail, seems to consign the “Tiger” element of the mark applied for to a small ‘detail’.

The Court was also not persuaded that there was a long period of peaceful coexistence to be taken into account as Tigercat had failed to prove this to the satisfaction of the Court.

On the one hand, “Tigercat” sounds like an unnecessary tautology (like ‘salmonfish’?), but – on the other – in trade mark terms it is a potentially unusual juxtaposition of words which should elevate it beyond simply being regarded as the word “cat”, which seems to be what the General Court has done in this case.

Potentially, the General Court considered that this tautology made Tigercat an unsympathetic applicant (why not just use “Tiger”?). However, the court’s interesting observation that the word “cat” (and “caterpillar”) may have a descriptive meaning in the industry does not seem to have been explored in any detail and therefore ultimately did not allow Tigercat to join other parties in the industry in having compound marks (such as BOBCAT or ARCTIC CAT).