On January 24, 2022, the Federal Trade Commission (FTC) announced the revised thresholds for determining whether companies are required to notify federal antitrust authorities about a transaction under the Hart-Scott-Rodino Antitrust Improvements Act of 1976, as amended (HSR Act). If a proposed merger; acquisition of stock, assets or unincorporated interests; or other business combination meets certain thresholds, the parties must notify the FTC and the Department of Justice and observe a waiting period before consummating the transaction. Section 7A(a)(2) of the Clayton Act requires the FTC to revise all of the HSR Act thresholds annually, based on changes in the gross national product.

The new minimum filing threshold will be $101 million. All of the revised thresholds are higher than the current amounts, as shown on the chart below. The new HSR Act thresholds have been published in the Federal Register and will become effective February 23, 2022.

Text alternative for image below. 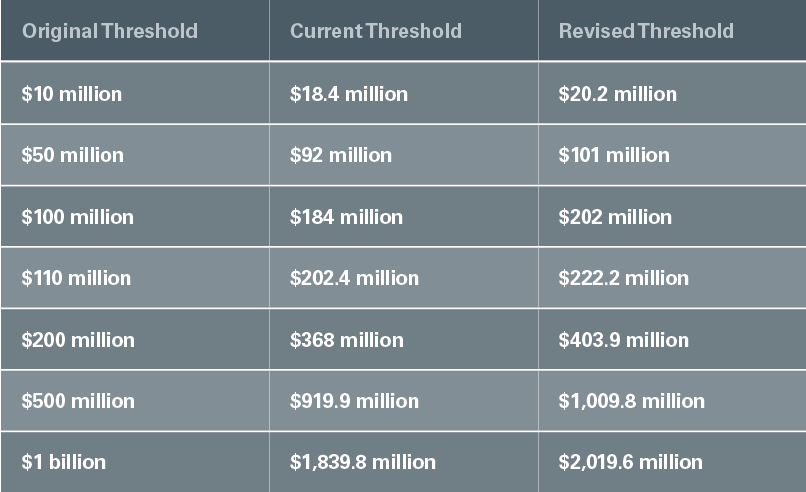 These revised thresholds will affect the jurisdictional requirements and certain exemptions under the HSR Act, as well as the HSR Act’s filing fee schedule. Thus, for example, a transaction valued below the revised minimum notification threshold of $101 million generally will not need to be reported, and the size-of-person test will not apply to a transaction valued above $403.9 million. The filing fees for reportable transactions will be as follows: