Managing VAT in the UAE: Gearing up for end-of-year input tax adjustments

The first anniversary of the introduction of VAT in the UAE was 1 January 2019 and, where applicable, many businesses have little time left before the end of their first tax year to carry out any required end-of-year input tax adjustments. Partial exempt taxpayers (i.e., taxpayers that carry out both taxable and exempt supplies or non-economic activities, such as banks, holding companies, life and non-life insurance providers, charities and real estate developers) are required to review and analyze their input tax recovered over the course of the year. In certain cases, the end-of-year adjustments may result in a change to the amount of VAT that can be recovered for the year.

Below are a few tips and reminders for you to consider to make your end-of-year adjustment process smooth and less taxing: Where the tax period ends on 31 March and quarterly thereafter, the tax year ends on 31 March.

For a taxpayer that submits VAT returns on a quarterly basis, the tax year is identified as follows:

2. Confirm whether you need to carry out end-of-year input tax adjustments.

Taxpayers that incur input tax for making exempt supplies or non-economic activities are required to calculate and determine the input tax recoverable in relation to those supplies in each tax period. This entails a two-step process:

Taxpayers need to attribute the input tax incurred on an expense that is wholly used to make a supply, to that particular supply. The input tax may either be fully recoverable or irrecoverable depending on the type of supply that the expense (on which the input tax was incurred) can be attributed to.

Step 2: Attribution of residual input tax on the basis of the standard method

Taxpayers need to determine the extent of recoverable input tax that cannot be attributed to a particular supply (overhead or residual input tax) based on a percentage (rounded to the nearest whole number) which is calculated according to the following formula: 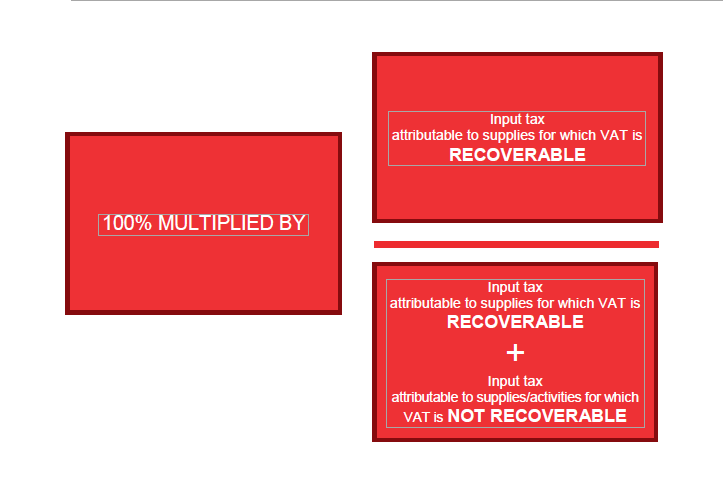 At the end of each tax year, the taxpayer is required to carry out the same calculation in respect of the entire tax year. The aim of the annual adjustment calculation is to correct any fluctuations in the percentage of recoverable input tax which has already been calculated and claimed in each tax period during the course of that tax year. There is no de minimis provision applicable to the annual adjustment calculation.

3. Review whether the recoverable input tax calculated on the basis of the standard method, reflects actual use. If not, analyze and determine which alternative proxy would provide a fair and reasonable result. Document the entire review process.

If the difference between the recoverable input tax calculated on the basis of the standard method (after the annual adjustment calculation) and that calculated on the basis of actual use is more than AED 250,000, the taxpayer is required to make the actual use adjustment. It is important that the taxpayer produces a file evidencing that the actual use analysis has been carried out and the process that has been followed to determine the proxy that reflects a fair and reasonable recovery of the input tax.

4. Ascertain whether an expense incurred on assets qualify under the Capital Asset scheme, and verify the amount of input tax (incurred on the relevant expense) recovered in the tax periods during the year, and the actual use of the capital asset. Maintain a register to keep track of the adjustments.

This is only relevant for taxpayers that have acquired or produced assets in the 2018 tax year on which VAT is incurred and that are subject to the Capital Asset scheme. Assets or expenses incurred from them qualify under this scheme if they are valued at over AED 5 million (excluding VAT) and have an estimated useful life of more than 10 years (for buildings) or 5 years (for capital assets other than buildings). In some cases, staged payments in relation to the construction, purchase, refurbishment, extension or other work undertaken for a building are grouped together and treated as one single capital asset.