This is the final 2019 edition of the Eversheds Sutherland SALT Scoreboard. Since 2016, we have tallied the results of what we deem to be significant taxpayer wins and losses and analyzed those results. This edition of the SALT Scoreboard includes a discussion of the Wisconsin Court of Appeals’ decision regarding “look through” receipts sourcing, insights regarding the retroactivity of tax credit limitations and the scope of Public Law 86-272, and, to end the year on a high note, a spotlight on taxpayer wins. 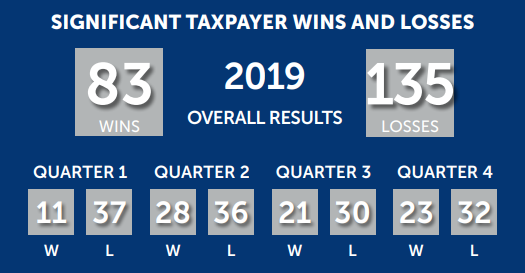 SUMMARY: The Wisconsin Court of Appeals rejected the Wisconsin Department of Revenue’s attempt to include in a software developer’s franchise tax sales factor numerator the gross receipts from the use of its computer software by Wisconsin end-users. The court held that the taxpayer was not required to “look through” its computer manufacturer customer to source a sale to the location of the customer’s customer. Instead, the court determined that the royalty receipts at issue must be sourced to Wisconsin only if the income-producing activity was performed in the state. View more information.

SUMMARY: The New York Supreme Court, Appellate Division, held that New York’s retroactive decertification of Qualified Empire Zone Enterprise tax credits violated the taxpayers’ due process rights. In April 2009, New York amended the QEZE tax credit requirements, which the New York State Department of Taxation and Finance applied retroactively to January 1, 2009. The court determined that the retroactive decertification was impermissible because there was not adequate forewarning of a change in the law, nor was there an opportunity for taxpayers to change their behavior. View more information.

SUMMARY: The Maryland Court of Special Appeals upheld the Comptroller’s determination that an out-of-state pet food seller did not qualify for Public Law 86-272 protection because the seller’s collection of competitive information in Maryland by its employees was neither ancillary to solicitation of sales, nor de minimis. Instead, the collection of competitive information was “carried out on a regular basis as a continuing matter of company policy.” View more information.

SUMMARY: The Oregon Tax Court upheld the Oregon Department of Revenue’s proposed increase in the real market value of an optical fiber network operator’s centrally assessed property. The taxpayer argued that the Department should not have included in its “unit” certain “investment attributes” it claimed do not qualify as property. Ultimately, the court accepted the Department’s revenue growth rates, which resulted in an increase in the value of the taxpayer’s property relative to the original assessed value. View more information.

SUMMARY: The New York Division of Tax Appeals held that a corporate taxpayer must include royalties received from foreign affiliates in the computation of its taxable entire net income for its 2007 through 2012 tax years. Under prior law, New York had a royalty add-back regime requiring a taxpayer that paid royalties to a related party to add back the payments to the extent they were deductible in calculating federal taxable income. New York also provided a “royalty income exclusion” that allowed royalty payees to exclude from income related entities’ royalty payments to the extent the payments were included in the payees’ federal taxable income. The Department argued that the royalty income exclusion did not apply if the royalty payments would not be required to be added back by the related payor under the add-back provisions. The corporation countered that the royalty payments received from its foreign affiliates qualified for the royalty income exclusion because the foreign affiliates would be required to add back such payments if they were New York taxpayers. However, the DTA concluded that the payees must be New York taxpayers to qualify for the exclusion and, therefore, the royalty payments at issue could not be excluded. View more information.

SUMMARY: The New Mexico Administrative Hearings Office (AHO) held that a package delivery company could depart from the mileage-based statutory apportionment method for trucking companies. That method produced a result that bore no rational relationship to the taxpayer’s business activity. The AHO explained that the mileage method can cause distortion in large geographic states with small populations – like New Mexico – because drivers travel farther to reach fewer customers than in smaller, more densely populated states. The AHO determined that the mileage method was grossly distortive for the taxpayer because it resulted in a more than ten-fold increase in sales attributed to New Mexico compared to actual revenue from New Mexico customers. In place of the statutory method, the AHO permitted the taxpayer to use the “state-to-state volume method,” which assigned half of the receipts from a sale to the state of origination and the remaining half to the destination state. View more information.

SUMMARY: The Ohio Board of Tax Appeals (BTA) held that an insurance company was entitled to a refund of sales tax paid on its purchase of communication cabling for internet and Voice over Internet Protocol (VoIP) installed in its headquarters office building. In its refund claim, the taxpayer asserted that, because the cabling was incorporated into the real property, the charges for the cabling and its installation constituted a non-taxable construction contract. The Commissioner argued that the construction contract rule did not apply because the cabling constituted a “business fixture.” The BTA found that the communications lines were not a business fixture. Specifically, the communications lines were not designed to meet the specific needs of the taxpayer’s business, but could be installed in any office building for VoIP and internet communications “and are as common to commercial property as telephone lines and coaxial cables were in the past.” View more information.

SUMMARY: The Maryland Tax Court reversed the Comptroller’s disallowance of net operating loss deductions (NOLs) and effectively struck down a regulation that limited the usage of prenexus NOLs. The Comptroller disallowed the taxpayer’s use of NOLs accumulated by entities with no nexus in Maryland that subsequently merged into the taxpayer, relying on a regulation adopted in 2007. The Tax Court ruled that no statutory authority existed for the regulation, and the only permissible subtractions or additions to federal taxable income are prescribed in Maryland statutes. Therefore, the Tax Court held that the taxpayer’s NOLs were allowed because no statute contemplated the Comptroller’s modification. View more information.

SUMMARY: The California Office of Tax Appeals (OTA) held that value-added tax (VAT) imposed on the provision of services is included in the sales factor of California’s apportionment formula. The OTA rejected the Franchise Tax Board’s narrow interpretation of the term “sales” as only allowing for excise or sales tax (including VAT) in the sales factor for sales of tangible personal property—not for sales of services. Rather, the term “sales,” defined as “all gross receipts,” includes “the whole amount received.” Additionally, the OTA held that the Board’s interpretation was not owed deference because the underlying regulation was based on an unambiguous Multistate Tax Commission model regulation. View more information.