The Bill serves as a useful reminder to companies to ensure that their systems and controls for preventing and detecting fraud and corruption are sufficiently robust. Although Ireland will not participate in the European Public Prosecutor’s Office (EPPO) - whose activities are expected to ramp up in 2021 - the increased focus on these offences at EU level may result in the referral of suspected offences to Irish law enforcement agencies for investigation.

The Bill will have significant ramifications for companies in Ireland, particularly those with business operations in Europe or which operate in industries which attract EU funding. One of the most important aspects of the legislation is the introduction of a new specific offence of fraud affecting the financial interests of the EU.

The concept of fraud against the EU’s financial interests can encompass anything from VAT fraud to procurement fraud where EU funds are involved.

Companies will be liable for offences committed by their directors, employees, agents or subsidiaries where there was a failure by the company to exercise the requisite supervision or control over the person who has committed it.

Similar to the 2018 Corruption Act, a defence will be available to companies to show they took all reasonable steps and exercised all due diligence to avoid the commission of the offence. 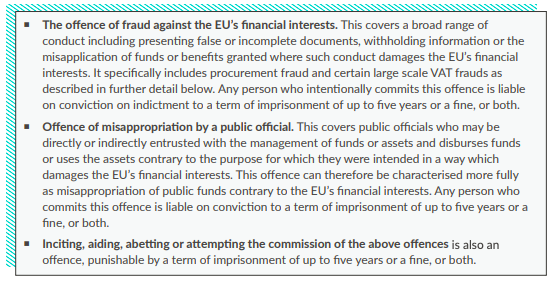 The Bill provides that a company shall be guilty of an offence where:

Liability for the proposed new offences will extend to acts committed overseas by Irish citizens or persons who have had their residence in the State in the 12 months before the commission of the offence.

This will permit individuals and companies to be prosecuted in Ireland for certain offences committed outside Ireland, such as fraud affecting the interests of the EU, misappropriation of EU funds, or the failure by a company to prevent the commission of a fraud offence.

E. How will the Bill affect the existing public procurement landscape?

The Bill creates additional deterrents in the EU’s fight against corruption and fraud in public procurement. The EU Procurement Directives already facilitate mandatory exclusion from procurement processes for companies convicted of corruption and fraud. They also contain tools to support fraud detection including reporting obligations and retention of records. However, the Bill now places a sharp focus on criminal liability for procurement fraud which covers conduct both at the tendering stage and the post- contract award stage.

Companies tendering for public contracts will need to be particularly vigilant in ensuring that robust systems are in place to prevent and detect procurement fraud.

Public officials entrusted with the management of funds or assets will also need to be mindful of the new offence of ‘misappropriation’ prescribed under the Bill. The offence applies to any public official who intentionally commits, disburses funds, appropriates or uses assets contrary to the purpose for which they were intended which damages the EU’s financial interests. The definition of ‘public official’ covers not only persons in public office holding formal positions but also private persons involved in the management of EU funds (e.g. third party contractors).

The Bill provides that the offence of fraud affecting the EU’s financial interests is to include certain cross-border large scale VAT frauds involving damage to the EU budget exceeding €10m and involving two or more EU Member States. The offence refers to any act or omission committed in cross-border VAT fraudulent schemes involving:

The current domestic Irish legislation is relatively comprehensive in providing for both civil and criminal penalties in in the event of perpetration of VAT fraud (i.e. Section 1078 Taxes Consolidation Act 1997 and Section 108C Irish VAT Act 2010). Although the Bill does not define the level of fines (which could conceivably exceed those fines provided for in Section 1078 TCA 1997), the imprisonment terms under domestic tax legislation and the Bill are similarly at the higher end.

Aside from the civil measures available to the Irish Revenue Commissioners to punish VAT fraud (which should continue to subsist), the new criminal offence of VAT fraud affecting the EU’s financial interests goes further in the following ways: 

G. What do companies need to do?

Every company should conduct its own risk assessment, specifically tailored to its business and the specific markets in which it operates, identifying risk factors and exposures that may make it more likely to be exposed to the offences to be introduced by this legislation. These might include, for example, performing public contracts, work on EU-funded projects or business models/products susceptible to cross-border VAT fraudulent schemes. Where these risk factors apply, companies should take concrete action to be able to show that they took ‘all reasonable steps’ and exercise ‘all due diligence’ to avoid the commission of an offence, including making sure that their employees, agents and subsidiaries are subject to adequate supervision.

From a VAT perspective, although companies may already be applying due diligence processes in light of obligations under current domestic tax legislation, it is worthwhile considering again given the scope of the new offences introduced by the Bill.

If you have already undertaken a corruption risk assessment and put in place prevention/detection systems or policies following the enactment of the 2018 Act, then these can be updated to encompass these new offences. 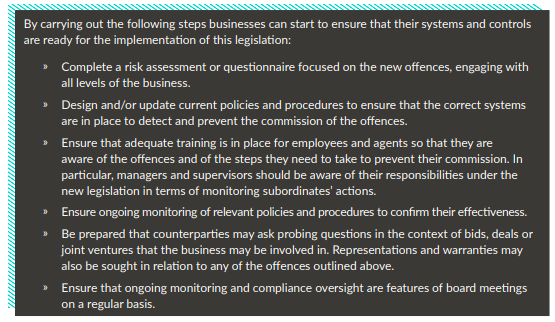 Our experienced teams are on hand to guide you through this new legislation and to advise on how you can best tailor your company’s response to ensure that it is prepared for these new requirements when they are implemented in the coming months.