While there have been a small number of decisions by the courts on the unfair contract terms regime as it applies to consumer contracts since the national UCT regime commenced on 1 July 2010,1 this decision marks the first time that the regime has been applied in the context of B2B arrangements.

Since the elements of the test of ‘unfairness’ are expressed in broad terms, as outlined below, the decision provides some guidance on some of the factors that are relevant in a B2B context when considering whether a particular term (a) would cause a significant imbalance between the parties’ respective rights and obligations under the contract and (b) is reasonably necessary in order to protect the legitimate interests of the advantaged party.

The UCT regime applies to standard form ‘small business contracts’, and provides that any ‘unfair’ term in such a contract is void and unenforceable. Small business contracts are those in which at least one party employs fewer than 20 persons and in which the upfront price of the contract is equal to or less than AUD 300,000 (for contracts with a term of one year or less) or AUD 1,000,000 (for multiyear contracts).]#

The ACL doesn’t explain what constitutes a ‘standard form’ contract, but it is essentially a pre-prepared contract that isn’t open to negotiation.

A term is ‘unfair’ if

(a) it would cause a significant imbalance in the parties’ rights and obligations arising under the contract; and

(b) it is not reasonably necessary in order to protect the legitimate interests of the party who would be advantaged by the term; and

(c) it would cause detriment (whether financial or otherwise) to a party if it were to be applied or relied on.

In applying the principles outlined above it is necessary to have regard to the contract as a whole and the extent to which the term is transparent.

The terms that were put in the bin by the court

The Federal Court found that each of the terms set out in the table created a significant imbalance between the respective rights and obligations of JJ Richards & Sons Pty Ltd and its customers.

The table summarises each of the terms found to be unfair and the Court’s reasoning for its finding that the terms created a ‘significant imbalance’ and were not reasonably necessary to protect the legitimate interests of the advantaged party.

Additionally, in finding that the terms set out in the table as lacking transparency, the Federal Court stated that the terms were drafted in legal language and not in plain English, they were presented in an unclear manner in a small font size and did not draw the customer’s attention to them.

Companies therefore need to carefully consider how their standard contracts are presented and in particular should use plain English, avoid the use of legal jargon, and present contracts that are presented in a legible type face, at a legible size, with white space to assist readers. 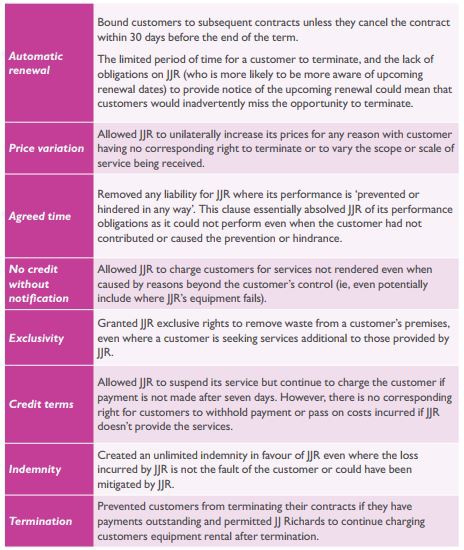 What steps can contracting parties take?

Contracting parties that use standard form contracts to engage will small businesses (either as purchasers or suppliers of goods) should again review their contracts with a critical eye to ensure that the terms: