An Outlook on Government Contracts in Turkey: Special Focus on Aerospace and Defense

Turkish Government has spent TRY 112.089.955.000 on various types of public procurements within the first six months of 2018. Even though there is no official data about the second term of 2018 yet, considering the fact that total amount of public procurements in 2017 reached TRY 230 billion, this number is very likely to double. After all, public procurement expenses have never decreased for the last five years. (See below) 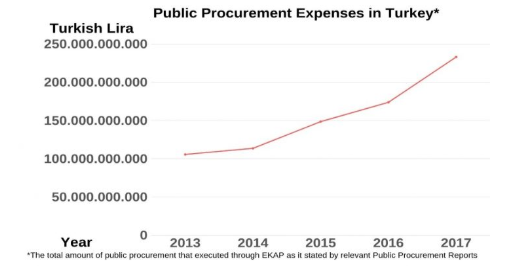 Contract numbers with foreign contractors constitute 0,15% of all, and their value reached TRY 2.696.714.000 which is 2,45% of the aggregate amount. The proportion is much higher than last year in which the ratio was 1,53%. Moreover, this is the highest percentage in the first half of public procurements since 2013. The percentage of public procurements that were contracted with foreigners was slightly higher during the first term of 2013 with 2,48%.

It is also necessary to review the statistics of debarment in public tenders which aims to protect public entities by ensuring that transparent and uncorrupt procurements take place. By the end of 30.06.2018, there were 8.235 active debarment decisions in total including 2.807 that have been taken during the first term of 2018. Almost all of these debarment decisions originated from the Laws No. 4734 and 4735 respectively, which regulates public procurement procedure while a slight percentage arose from the Turkish Criminal Code. Although debarment decisions arose from different Laws, their reasoning are mostly same or at least highly similar. According to the related articles of the mentioned Laws, most common causes of debarments are fraud, forgery, corruption or breach of the covenant without a force majeure.

Turkish government has adopted decisive policies in defense industry to increase domestic production. This approach has stimulated defense industry and also created opportunities for both domestic and foreign actors.

As a consequence, the total public procurement expenses seem to be higher than last year. On the other hand, the procurements related defense industry decreased. However, it is still attractive and promising.