Australia generally welcomes foreign investment. The Australian government screens certain foreign investment proposals on a case-by-case basis to determine whether a particular proposal is contrary to the national interest or, in certain circumstances, national security only. We outline some of the rules governing the screening process. However, Australia’s foreign investment rules are complex, and this brochure is not exhaustive. Legal advice should always be sought.

The main laws that regulate foreign investment in Australia are:

Separate legislation imposes other requirements in respect of foreign ownership in certain industries. This brochure does not cover these industry specific requirements.

Interest of a specified percentage

An interest of a specified percentage in a corporation, trust or unincorporated limited partnership includes the interests of a person’s associates and is measured slightly differently for each, but in general, it counts:

In addition, for certain purposes under FATA, if a person has the power to veto any resolution of the board, central management or general meeting of a corporation, unit trust or unincorporated limited partnership, the person is deemed to have an interest of 20% or more.

In many cases, a person is taken to acquire an interest of a specified percentage if they already hold that percentage, and then increase it.

Do not be fooled by the terminology – a person can, by virtue of the application of the tracing rules, acquire a direct interest indirectly.

Tracing rules operate up through chains of substantial interests, so that if a person has a substantial interest in a corporation, trust or unincorporated limited partnership (higher party), and the higher party has an interest of any percentage in a corporation, trust or unincorporated limited partnership (lower party), the person is taken to hold so much of the lower party that the higher party holds. This test operates through multiple chains of ownership and applies at each level irrespective of whether there is any practical control.

Who is regulated under foreign investment legislation?

What types of foreign investment transactions are regulated under FATA?

There are four types of action that are regulated under FATA:

The Treasurer has the power to make orders in relation to these kinds of transactions (including to block them, or to order divestments) if he considers the transaction to be contrary to the national interest. Significant actions only have to be notified if they are also notifiable actions or notifiable national security actions, but doing so and obtaining a notice of no objection cuts off the Treasurer’s powers (subject to the last resort powers described). Once notified, a significant action cannot proceed until a notice of no objection is obtained. Seeking approval is strongly advised, as these transactions are above a high monetary threshold and are therefore by definition material.

These are a category of transactions that must be notified and cannot proceed until a notice of no objection is obtained. Most notifiable actions are also significant actions.

The Treasurer has the power to make orders in relation to these kinds of transactions (including to block them, or to order divestments) if he considers the transaction to be contrary to national security. These actions must be notified and cannot proceed until a notice of no objection is obtained.

The table below sets out the key notifiable actions (all of which are also significant actions) for onshore transactions, as well as how the treatment differs (if at all) where the action is offshore (ie, indirect acquisitions). 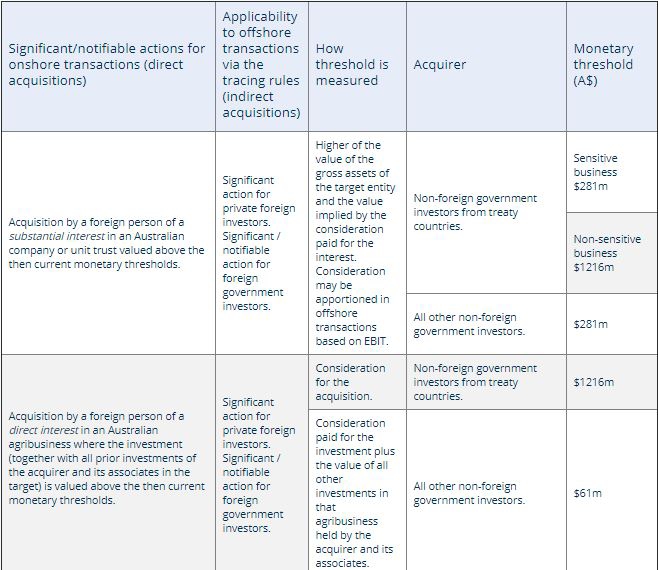 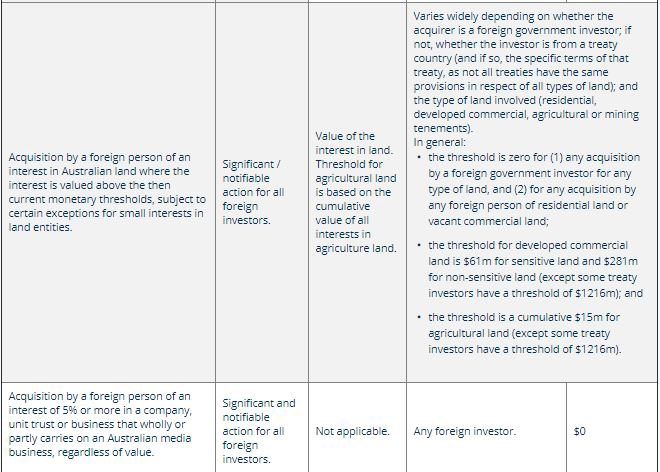 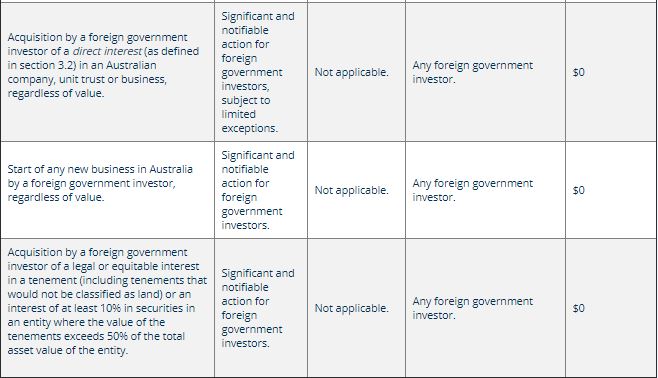 From a practical perspective, significant actions that are not also notifiable actions include (among others):

In general, the thresholds are the same as in the first row of the table in section 5.1.

A notifiable national security action includes any of the following actions by a foreign person:

Note that there are no monetary thresholds, and the tracing rules can operate to capture offshore transactions. Further, offshore entities can carry on a national security business.

A national security business is one which is carried on wholly or partly in Australia (whether or not for profit) which is publicly known, or could be known upon making reasonable enquiries, to be one or more of the following:

What types of transactions are regulated? (Contined)

The definition of reviewable national security action is complex, but the action that will be most frequently caught is an acquisition of shares in a corporation that carries on an Australian business (or a holding entity of such a corporation), or units in an Australian unit trust (or a holding entity of such a unit trust), which has the result that a foreign person:

where the action is not otherwise a significant action, a notifiable action or a notifiable national security action. Importantly, this kind of action can (through operation of the tracing rules) capture foreign corporations if they carry on business in Australia.

Other reviewable national security actions include entering into an agreement relating to the affairs of an entity, or altering a constituent document of an entity, as a result of which one or more senior officers of the entity will be under an obligation to act in accordance with the directions, instructions or wishes of a foreign person who holds a direct interest in the entity. In these cases, the entity in question must generally be an Australian entity.

This call in power covers a broad range of transactions. The government has identified a number of categories of businesses in respect of which it encourages investors to seek advance approval (assuming the transaction is not otherwise a notifiable action or notifiable national security action). These include:

The Treasurer can re-review actions notified after 1 January 2021 where approval has been given to determine whether a national security risk relating to the action exists, and certain conditions are satisfied, the Treasurer may impose conditions, or vary or revoke any conditions that have been imposed, and may make orders prohibiting an action or requiring the undoing of a part of whole of an action. This includes, as a last resort, requiring divestment.

The conditions that need to be met before the Treasurer may exercise the last resort power are:

The definition of foreign government investor captures not only state-owned enterprises and sovereign wealth funds but also things like public sector pension funds, the investment funds into which state-owned enterprises, sovereign wealth funds and public sector pension funds invest and, due to tracing rules, portfolio companies for such investment funds.

While many investment funds will be deemed to be foreign government investors, a new exception has been introduced specifically for them. Where:

the 40% test described above can be disregarded.

Funds may benefit from this exception if investors have some influence over the broad investment strategy or are able to participate in collective decision making in relation to the fund, but are not involved in individual decisions about particular investments. Examples include:

Some kinds of foreign investment proposals give rise to more specific concerns, which the Australian government takes into consideration (in addition to those described above) when examining those proposals:

The same penalty applies if a person breaches a condition contained in a no objection notification or an exemption certificate.

The FATA also contains significant civil penalties for certain breaches of the Act. The maximum civil penalty for breaches such as failure to give notice to the Treasurer before taking a notifiable action, taking a significant action in certain circumstances without having first obtained a no objection notification, or breaching conditions contained in a no objection notification, is the lesser of:

The FATA also contains a 3-tier infringement notice regime for contraventions of FATA which applies as follows:

The penalties that can be issued under the infringement notice regime are set out in the table below (A penalty unit is currently $222. Penalty units are generally increased every three years to account for inflation so the monetary values in the table may change).