Lead compound analysis (LCA) has been used in the evaluation of chemical compound Obviousness for the past 20 years.[1] This approach supplemented the historic formulation of In re Dillon.[2] While the Dillon analysis pivots about the structural similarity of the cited compound to that claimed and any motivation to make the claimed compound, LCA involves selection of a lead compound that is the most promising candidate for modification to improve its activity. As such, it represents a somewhat more difficult standard than in Dillon.

LCA is a two-step process involving first reviewing the selection of a lead compound followed by evaluating the motivation for its modification. Quite frequently, the first step is vigorously contested and constitutes the heart of a Federal Circuit Opinion. Such was not the case, however, in Mylan Pharmaceuticals Inc. v. Research Corporation Technologies, Inc.[3] This case involved claims 8-13 of Research Corporation Technologies, Inc.’s Reissue Patent 38,551 (‘551 Patent) directed to epilepsy drugs,[4] and resulted from Mylan Pharmaceuticals Inc.’s appeal of an adverse decision in IPR 2016-00204.[5]

Claim 8 of the ‘551 Patent recites (R)-N-benzyl-2-acetamido-3-methoxypropionamide (lacosamide), shown in Figure 1.[6] 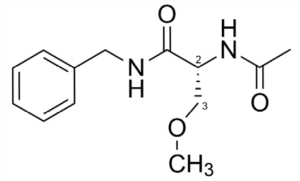 At both the Board and on Appeal the lead compound advanced was obtained from work published in Kohn 1991 dealing with anticonvulsant activity in mice, where the α-methyl, shown as “X” in (R,S)-2-acetamido-N-benzyl-2-methylacetamide (Figure 2), was replaced with functionalized nitrogen, oxygen, and sulfur substituents.[7]

From this work, the most effective compound was found to be “3l” (Figure 3), where NH(OCH3) is at the α-carbon position.[8] 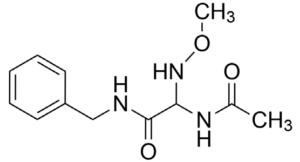 Compound 3l was thus advanced as the lead compound.[9] However, this choice was not the principal point of contention either at the Board or the Federal Circuit. Instead, the Parties focused on the motivation for modifying it.

The principle argument for modifying compound 3l to arrive at the claims of the ‘551 Patent relied on teachings of bioisosteric replacement, which hold that modifying compound 3l by replacing the amine of its methoxyimino group with a methylene link would provide stability, and result in a more pharmaceutically common and acceptable moiety.[10] It was also argued that anticonvulsant activity in this class of compounds would be maximized by such a replacement because of the resultant size of the group on the α-carbon.[11] Still another argument maintained that such modification retained a functionalized oxygen atom two atoms removed from the α-carbon, which was associated with improved potency.[12]

In rejecting these arguments and siding with the patent holder, the Federal Circuit returned to the touchstone of activity in its LCA analysis:

We agree with RCT that the Board’s findings are supported by substantial evidence. Even if a person of skill in the art would have been motivated to modify compound 3l, the record evidence suggests that compounds without a methoxyimino or nitrogen-containing group at the α-carbon had reduced activity.[13]

Addressing the bioisosteric replacement argument, the Federal Circuit conceded that such a modification could be used to improve toxicity, however, it hadn’t been explained why bioisosteric replacement would have been used to modify compound 3l, which already possessed high potency and low toxicity.[14] Finally, with respect to the argument that the suggested replacement would have changed the structural conformation of the compound, the Federal Circuit pointed out that the conformational change may have affected interaction with receptors and altered biological activity.[15]

For the Federal Circuit in Mylan Pharmaceuticals Inc. v. Research Corporation Technologies, Inc., when dealing with the second step of the LCA analysis, the potential improvements of further reduced toxicity and stability did not provide enough motivation to modify compound 3l in view of the contrary showings of potential reduced activity, which is the reason it was chosen as a lead compound in the first place. It is not at all certain that the same outcome would have resulted from In Re Dillon.