On 22 July 2019 the Federal Court issued its decision in Loblaws Inc v Columbia Insurance Company.(1) In this case, Pampered Chef, a Berkshire Hathaway company and a world leader in the sale of premium kitchenware products, succeeded at trial in defending trademark infringement, passing off and dilution and depreciation of goodwill claims brought by Canada's largest retailer, Loblaws, in relation to its use of a trademark that includes the letters 'P' and 'C'.

In the 1980s Loblaws launched its private label brand, President's Choice, and the companion brand PC in connection with food and grocery products. Over time, Loblaws' use of the PC mark expanded into a range of products and services, including:

Loblaws registered both the marks PC per se and the PC script logo (Figure 1) for a wide range of goods and services, including kitchenware and houseware products.

Pampered Chef makes and sells high-quality kitchen tools. It primarily uses a direct sales model, through which its products are sold via in-home and online cooking and catalogue parties. Pampered Chef also sells its products through its own website and its independent consultants promote and sell its products online, including through social media and by means of 'virtual cooking parties'. In 2015 Pampered Chef updated its branding, adopting a family of marks that included a long-term logo (Figure 2) and a short-term logo (Figure 3).

Loblaws alleged that Pampered Chef's use of its short-form logos in connection with kitchenware products (Figure 4), had infringed Loblaws' registered PC marks and constituted passing off and dilution and depreciation of goodwill. 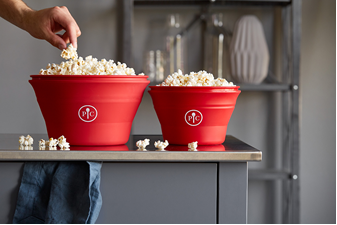 The Federal Court dismissed all of the claims against Pampered Chef, finding that Loblaws had not established confusion between Pampered Chef's short-form logos and Loblaws' PC marks.

In conducting its analysis, the Federal Court held that while Loblaws' PC marks had little to no inherent distinctiveness, through extensive use, publicity and sales in Canada, they had acquired substantial distinctiveness and, in the case of the PC script mark, fame.

In dismissing Loblaws' claim, the court gave little weight to its expert survey evidence, finding this to be of limited relevance and not favouring of Loblaws in the confusion analysis to any material extent. In reaching this conclusion, the court accepted Pampered Chef's concerns that the survey considered no contextual cues, such as the fact that, in the real world, consumers would encounter Pampered Chef's logos in close association with Pampered Chef's name. Pampered Chef successfully demonstrated that the display of its name was sufficiently prominent on its website and social media that it would be readily apparent to any customer that it is operated by Pampered Chef and not Loblaws.

The court also found the parties' channels of trade to be highly distinguishable. For example, Pampered Chef uses a sales force of independent consultants in a direct selling marketing model, while Loblaws is a traditional retail seller that has never used, nor has any plans to use, the direct sales channel. The court held this to be a significant factor strongly favouring Pampered Chef: "the hypothetical customers of [Pampered Chef's] products would be aware of how to buy the products and would not expect them to be available through [Loblaws'] distinct sales channels."

The court also gave significant weight to the lack of evidence of actual confusion between the parties' marks in the three years of co-existence since Pampered Chef had begun its rebrand, finding the lack of such evidence probative that confusion was unlikely. The court noted the substantial volume of sales by both parties and considered the fact that evidence of actual confusion would have been available to Loblaws as a result of its "robust customer service department and trademark enforcement program", including its active monitoring for infringing trademarks and its provision of training to employees on reporting instances of confusion.

After considering all of the factors, the court dismissed all of the claims against Pampered Chef, notwithstanding the fame of the PC marks and the similarities between the parties' goods. Taking into account the differences in the channels of trade, the probative lack of evidence of actual confusion and the use of Pampered Chef's name and long-form logo in its channels of trade, the court held that there was no reasonable likelihood of confusion between the marks.