CEO Pay Ratio: Perspectives on the First Year and a Look Forward

As the dust has settled on the first round of CEO pay ratio disclosures, a few things are clear: companies spent considerable time and money calculating and disclosing their pay ratios, many CEOs worried about the response to their pay ratio and, most importantly, the reactions of investors, special interest groups and the press were much more muted than expected. It appeared that the most interested group was the employees, and they were interested in how their own compensation compared to the median compensation, rather than to what their companies’ pay ratio was.

The first round of disclosures did not get us any closer to settling the long-running debate as to whether pay ratio disclosure provides useful information for investors. Some continue to argue it is a tool for special interest groups to raise the drum beat of wage inequality and to wag a finger at perceived corporate greed, while others believe it sheds light on a company’s compensation philosophy. A company’s pay ratio may become a more useful data point when it is analyzed over time and compared to industry peers.

We reviewed and analyzed the CEO pay ratio disclosures of the 400 companies in the S&P 500 that disclosed their CEO pay ratio on or before July 20, 2018.

Information about the CEO pay ratio by industry sector, market capitalization, revenues and number of employees is presented at the end of this insight.

Companies reported a higher alternative pay ratio for a variety of reasons, including increasing the CEO’s compensation by using target total compensation for the CEO (as opposed to reported CEO compensation) for the year because the CEO did not receive an annual equity award in the year. Companies also reported a higher alternative pay ratio to take into account a special one-time equity award the CEO was getting in the following year – likely to get out well ahead of an expected increase in the pay ratio in the following year.

In 2018, ISS began displaying both the CEO pay ratio and the total annual compensation of the median employee in its research reports – but indicated that pay ratio information will not affect ISS’s voting recommendations in 2018

Only one of the S&P 500 companies surveyed provided a comparison of its pay ratio to its peers – and that company made comparisons of its ratio to both the ratios of companies with similar revenues and to those with a similar number of employees, although it did not identify the companies in either of these comparisons with any specificity.

Overwhelmingly, the S&P 500 companies surveyed chose not to draw attention to their pay ratio disclosure and placed it deep into their proxy statements. They also generally did not reference their pay ratio in either their proxy statement summary or in the summary or “highlights” section of their corporate governance or executive compensation practices. 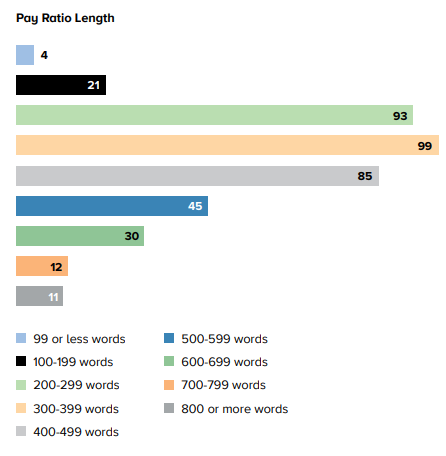 A significant majority of companies used their fiscal year end as their measurement date for purposes of determining the median employee. The next most commonly used date was the first day of the third-to-last month of their fiscal year. 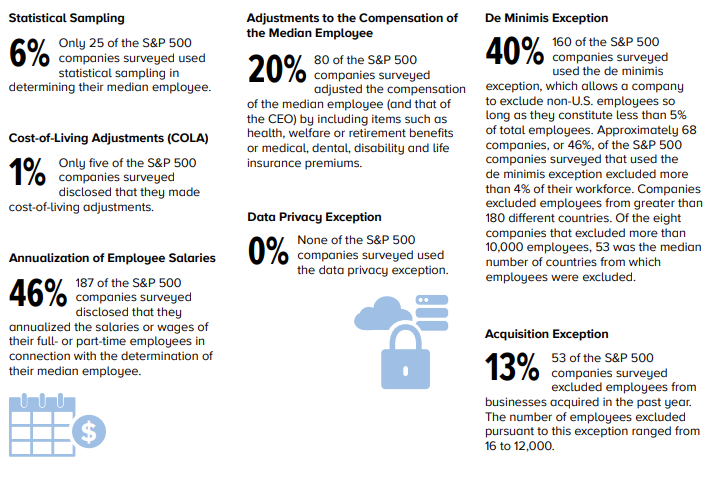 As the year has progressed, companies have been carefully reviewing pay ratio disclosures made by other companies, particularly those in their industry to understand the methodologies used in order to better understand the level of comparability among them.

As companies reflect on the first year of pay ratio disclosures, they should consider potential changes to their calculation methodology and disclosure including whether to: 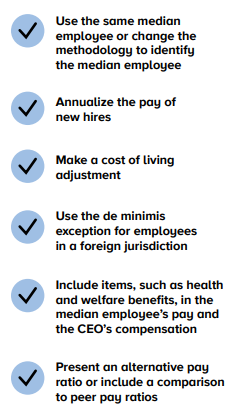 If a company makes a change in its approach to calculating its pay ratio in 2019, it should be mindful that SEC rules may require disclosure of both the change and why it was made.

Another thing that companies will be carefully watching is the various proposed and enacted legislation that tie reported CEO pay ratios to various taxes and fees. Currently six states (California, Connecticut, Illinois, Massachusetts, Minnesota and Rhode Island) have legislation pending that would increase the corporate tax rate or impose a surtax or additional fee on any corporation that reports a pay ratio in excess of certain thresholds. In addition, the City of Portland, Oregon has enacted a pay ratio surtax on a company’s local business tax liability and the City of San Francisco, California has announced that imposition of a pay ratio tax is under consideration.

In addition, it remains to be seen whether the SEC will issue comments on pay ratio disclosures or provide general observations on the quality of and practices used in preparing and disclosing pay ratios.

It is also unclear to what extent, if at all, ISS or Glass Lewis will take into account pay ratio information in formulating their voting recommendations for 2019. The first insights into this question may be available in connection with ISS’s 2019 policy formulation process.

And last but certainly not least, it remains unclear how investors will view or use the 2018 pay ratio disclosures. No doubt investor views will span a wide spectrum, and companies will likely spend a fair amount of time preparing for their next round of shareholder engagement on this issue.

Not surprisingly, pay ratios were generally positively correlated with market capitalization, revenues and number of employees at a company. That is, where these measures are higher, the CEO pay ratio is also higher. 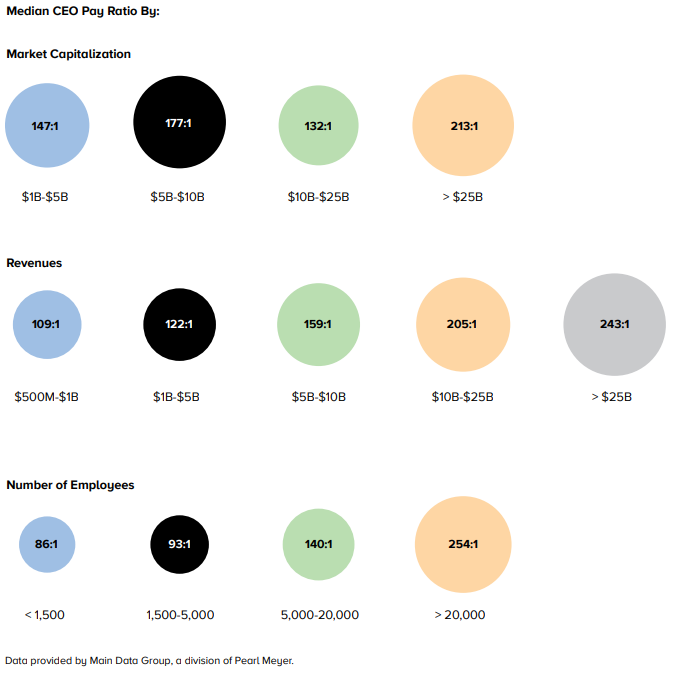 Among the 11 industry sectors set forth below, the median pay ratio in the consumer discretionary and the consumer staples sectors were considerably higher than those in the other nine industry sectors. This appears to have been largely driven by the relatively lower median employee pay in these sectors as companies in these industry sectors tend to have larger numbers of parttime and temporary employees and full time employees who are paid at or near minimum wage. On the other end of the spectrum, median pay ratios in the energy and utilities sectors were considerably lower than those in the other nine industry sectors, primarily as a result of the relatively higher median employee pay. 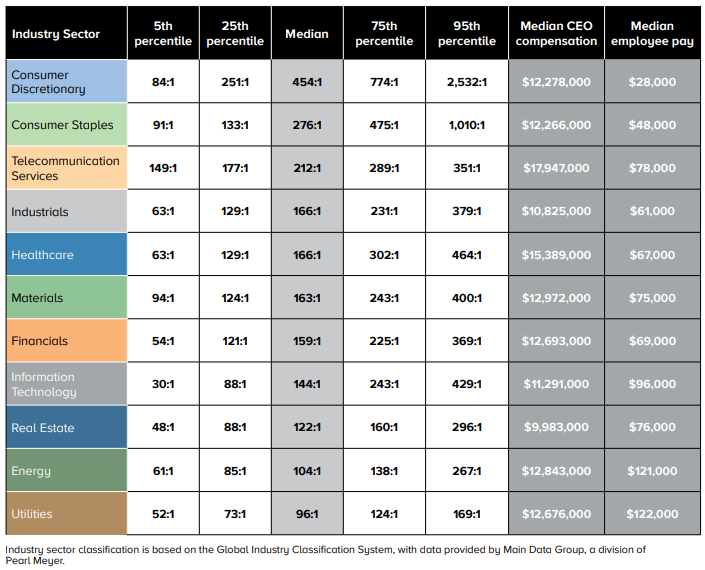