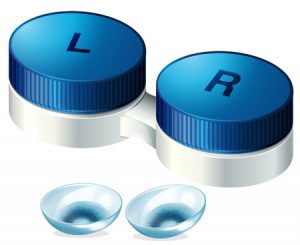 On October 27, 2017, Chief Administrative Law Judge D. Michael Chappell rendered his Initial Decision in the FTC’s Complaint against 1-800 Contacts, a complaint challenging as a violation of Section 5 of the Federal Trade Commission Act (15 U.S.C. § 45) and as an unfair method of competition 1-800 Contacts’ settlement agreements with numerous competitors that prohibit competitors from bidding on 1-800 Contacts’ trademark terms in search advertising on the Internet and that also require competitors to employ “negative keywords” directing search engines not to display the competitors’ advertisements in response to any search inquiry that includes 1-800 Contacts’ trademarks. The challenged settlement agreements were the product of 1-800 Contacts’ cease-and-desist letters sent to and several lawsuits filed against competitors beginning in 2004 that asserted that the competitors’ search advertisements that appeared in response to a user’s query on Internet search engines containing the term “1-800 Contacts” or variations thereof constituted trademark infringement.

The Initial Decision sided with the FTC, upholding the FTC’s complaint and finding that the FTC “met its burden of proving that the Challenged Agreements unreasonably restrain trade in violation of Section 5 of the FTC Act…. The evidence in this case demonstrates that the advertising restraints imposed by the Challenged Agreements cause harm to consumers and competition in the market for the sale of contact lenses online. This is sufficient to establish [the FTC’s] prima facie case that the agreements are anticompetitive. The evidence fails to prove that the Challenged Agreements have countervailing procompetitive benefits that outweigh or justify the demonstrated anticompetitive effects ….” Initial Decision, p. 7. The Initial Decision ordered 1-800 Contacts to cease and desist from entering into any new agreements or enforcing its existing agreements with competitors restricting the competitors’ search advertising. Initial Decision, pp. 203-04. The Initial Decision resulted from a month long evidentiary hearing (hearing began on April 11, 2017 and ended on May 12, 2017) where “[o]ver 1,250 exhibits were admitted into evidence, 43 witnesses [included experts] testified, either live or by deposition, and there [was] 4,554 pages of trial transcript. The Parties’ post-trial briefs, proposed findings of fact and conclusions of law, reply briefs and replies to proposed findings of fact and conclusions of law total 3,514 pages.” Initial Decision, p. 3 & n.2.

Then, 1-800 Contacts argued (Brief, pp. 3-4) that even if the agreements were subject to antitrust scrutiny, they do not violate the antitrust laws for multiple reasons, including (1) there is no evidence that the agreements had any anticompetitive effects, i.e., no evidence that they “resulted in lower output or supracompetitive prices for contact lenses”, (2) 1-800 Contacts does not have market power – “it accounts for only 10% of contact lens sales in the United States” if the market is defined as such, and even if the market is only just online sales of contact lenses (the market as defined by the ALJ in his decision), there are no barriers to entry or expansion so 1-800 Contacts 50%+ share of online sales does not prove market power, and (3) there was no showing that the challenged settlement agreements “were not reasonably necessary to obtain the procompetitive benefits of settling litigation and protecting trademarks” because there was no proof that there was any other practical way for 1-800 Contacts to settle and at the same time protect its trademark rights. 1-800 Contacts also argued that the Initial Decision is unconstitutional because “[i]t invades Article III courts’ inherent power to supervise the existing settlements and retroactively deprives 1-800 Contacts of the ability to enforce its trademark rights in violation of the Fifth Amendment.” Brief, p. 4.

According to the scheduling order for briefing the appeal, the FTC was supposed to file an Answering Brief on or before January 24, 2018, and then 1-800 Contacts would file its Reply Brief on or before February 9, 2018. However, the recent government shut-down has extended the deadlines. Briefing was stayed during the shutdown and for an additional five business days afterwards.