Will Developments in the UK’s Regulation of Cryptoassets Bring Them Into The Mainstream?

UK regulators are addressing regulatory uncertainty through a number of regulatory initiatives due for implementation in 2019.

Following the FCA’s consultation paper that offers guidance on the regulatory status of cryptoassets published in January 2019, the regulator is now engaging with the industry and other stakeholders such as law firms to finalise its guidance.

The consultation paper stems from the FCA’s work as a member of the UK Cryptoassets Taskforce (the Taskforce). The Taskforce — the FCA, Bank of England, and HM Treasury — was established to assess the risks and potential benefits of cryptoassets and to set out a plan for cryptoasset regulation in the UK. The Taskforce published its first report in October 2018, and the FCA’s proposed guidance is just one of a number of regulatory initiatives that will be implemented in the sector this year. The initiatives include an HM Treasury consultation on changes to the regulatory perimeter and the UK’s anti-money laundering regime, and HMRC guidance on the application of corporate tax rules to cryptoassets.

The FCA’s draft guidance provides a high degree of clarity as to the treatment of cryptoassets under existing UK regulation. The guidance focuses on whether or not cryptoassets fall within the FCA’s regulatory perimeter — clearly this requires a case-by-case determination of the features of each crypto-asset. While the generality of the current regulatory regime and its focus on traditional financial assets has sometimes made it difficult to determine whether or not a specific cryptoasset would fall within the scope of the regulatory perimeter, the FCA’s proposed guidance should clarify this determination in most cases.

There are two key perimeter regimes that may apply to cryptoassets in the UK:

The FCA has clarified that it takes a substance over form approach when determining whether a cryptoasset falls within the scope of either regime and confirms that the regulatory framework is “technology neutral”: regardless of the technology in question, assets that have the characteristics of those falling within either regime will be considered to fall inside the regulatory perimeter.

(i) The securities regime

The FCA defines cryptoassets that fall within the securities regime as Security Tokens. The terminology is perhaps imprecise given that the definition is intended to capture not only securities, but also derivatives and types of credit, deposit, and insurance products among others. In any event, the FCA’s guidance runs through each type of specified investment that may be relevant to cryptoassets and advises how they apply. The proposed guidance also sets out a number of more general factors that would tend to lead to the conclusion that a specific cryptoasset constitutes a specified investment. The key factor is whether the contractual rights and obligations the token-holder has by virtue of holding or owning a cryptoasset match those of owning a traditional specified investment. For example, a cryptoasset that gives holders similar rights to shares, like voting rights, or access to a dividend of company profits or the distribution of capital upon liquidation, is likely to fall within the definition of shares. Similarly, a cryptoasset that creates or acknowledges indebtedness by representing money owed to the token holder likely will constitute a debenture.

Other important factors include: 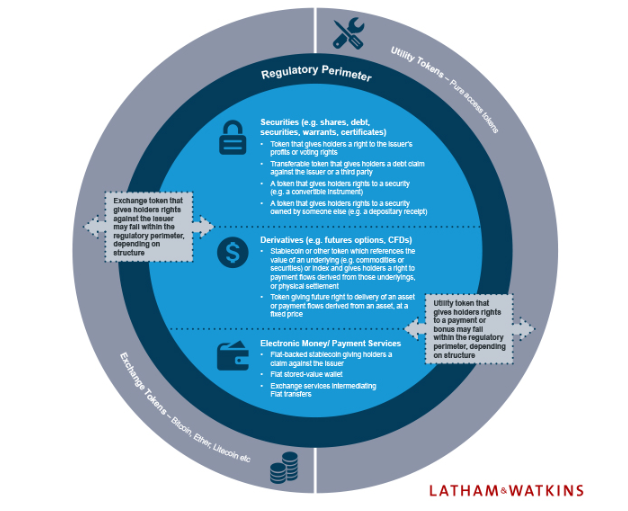 Are some cryptoassets unregulated?

While Exchange Tokens and Utility Tokens may fall outside the FCA’s regulatory perimeter, this does not mean that they will be outside the scope of all regulation. Firstly, the EU’s fifth money laundering directive (MLD 5) has expanded the scope of the EU’s anti-money laundering requirements to cover cryptocurrency exchanges and custodial wallet providers, even when providing services in relation to cryptocurrencies that fall outside the regulatory perimeter. MLD 5 is due to be implemented into UK law by the end of 2019. In addition, the FCA has clarified that consumer protection requirements, such as those in the Consumer Rights Act 2015, may apply even to unregulated cryptoassets.

The FCA’s consultation closes on 5 April 2019 and the FCA likely will publish final guidance during the course of the summer 2019. The FCA will also consult on a ban on the sale of derivatives with cryptoassets as their underlying later this year. HM Treasury is also expected to launch a consultation on potential changes to the regulatory perimeter relating to cryptoassets by the end of Q2 2019, and will also consult on gold-plating the requirements of MLD 5 to bring more industry players within the scope of the UK’s anti-money laundering requirements. Finally, HMRC is expected to launch guidance on the application of corporate tax rules to cryptoassets during the course of this year.