According to a recent report from Bloomberg, Lloyd’s of London has come under fire following the sexual harassment claims of a number of women. The company reacted to its alleged sexual harassment and bullying culture by introducing posters in popular local pubs urging its staff to report any instances of inappropriate behaviour. Unfortunately for Lloyd’s – and many of the world’s top insurance companies – this is one of the only interactions that most consumers have with their brand. Insurance is not something many consumers frequently purchase, explain analysts at Brand Finance, which means there is inevitably a low emotional connection with these brands. More damaging, however, is the fact that insurance brands are often not well respected in most markets, and are regularly perceived to be not very innovative or trustworthy. Positively, the industry is slowing shifting, but this lack of brand awareness, trust and connection could be a risk for top companies.

Despite Lloyd’s efforts to recover from its negative press coverage, the company still has issues to resolve. Its culture survey revealed 8% of the 6,000 respondents had witnessed sexual harassment in the past 12 months. Further, it found that 38% of respondents did not know who to raise concerns to if they had any, and only 45% reported feeling comfortable enough to do so. Indeed, the original whistle-blower has sued Lloyd’s of London alleging that he was subjected to racial discrimination, victimisation and harassment to undermine his credibility. It has been these events that led to the #SpeakUp campaign to eradicate unacceptable workplace behaviour. Lloyd’s isn’t the only one to come under fire, and the Bank of England has encouraged insurance companies to get their act together when it comes to work culture.

This has unsurprisingly, perhaps, caused a lot of negative PR for the sector, which doesn’t often find itself to be the focus of attention. There is generally a lack of engagement between everyday consumers and insurance companies, which makes it difficult for these brands to build rapport with their customers. This has further translated into consumers feeling a relative lack of trust to insurance brands, which could prove to be a problem as smaller tech-oriented businesses enter the field. The risk is that, as companies race to provide the best products at the lowest price, consumers will focus more on dollar signs than selecting a traditional business. Luckily, so far, shoppers seem to favour picking a well-established name in the market over a lesser known company, but this could change as insurtech advances.

While the insurance industry was already highly data oriented, ‘business as usual’ is no longer applicable, and digitally enhanced approaches have been kicked into overdrive by the rise in data collection, automation and AI. Insurtech is growing at a faster rate than fintech, advancing at a CAGR of around 35% over the past year and half. The companies that integrate data and modern technologies are filling a vacuum that traditional insurers have been slow to pick up on, with a consumer demand for speedy and efficient services and more personalised policies. For example, insurtech start-up Tractable, which launched in 2014, has transformed the way car insurers handle claims. Specifically, the company captures photos of the point of an accident and receives an estimate of damage quickly. This means that insurers can assess a damage claim in a matter of minutes.

It is not just budding businesses incorporating insurtech into their models. AXA has integrated systems into its insurance products to improve services. One such initiative is the use of sensors in shipments that are able to immediately detect problems. This allows for claims to be settled immediately without the need for a time-consuming investigation. The use of data and technology has begun to change the relationship between consumers and insurers. Previously there was minimal interaction between the two, but these connected services allow for more frequent communication, and present the opportunity for these companies to build their reputation and brand.

The State of Play

Some insurance companies – particularly in the West – have been slow to modernise their business models. These so-called 'dinosaur brands' could learn a thing or two from the major players in China. Digitally focused start-ups have a role in the Asian markets, but there are large insurers like Ping An Insurance and Taikang Insurance Group which are driving forward innovation in this space. Ping An has actually gone as far as to sell the facial recognition technology that it has developed to businesses within the travel industry.

Ping An also happens to be the world’s strongest and most valuable insurance brand, according to Brand Finance’s Insurance 100 2019 report. Its brand value has hit $50.5 billion, increasing by 93% in 2018. Not surprisingly, a lot of its success can be attributed to technology. It has been collecting data through online services in order to better understand clients and this approach helped win 36% of its 40 million new insurance customers. Chinese companies have been highly successful in building their brands. The total brand value for all insurance brands in China amounts to $98.2 billion, whereas the US only comes to $78.1 billion.

It is not all smooth sailing for Asia’s insurers though. Hong Kong-based AIA, who’s brand value jumped 51% in 2018, is facing slowing demand, with the ongoing anti-government protests hitting its sales to mainland Chinese visitors. The company has actually hired senior executive Lee Yuan Siong from its rival Ping An Insurance to replace its current CEO. AIA operates in 18 markets in the Asia-Pacific region, and Hong Kong accounts for its largest share of business. Thus, it is critical that it adapts to this situation.

Local markets are highly important for Asian insurers, and this is evident in their trademark portfolios. Ping An, China Life Insurance, CPIC and PICC – all ranked as some of the most valuable insurance brand – have filed extensively in China and other key neighbouring markets. They also have sought protection in a relatively low number of registers (see graph below). To compare, Lloyd’s, Allianz, AXA and Zurich have highly diversified portfolios. 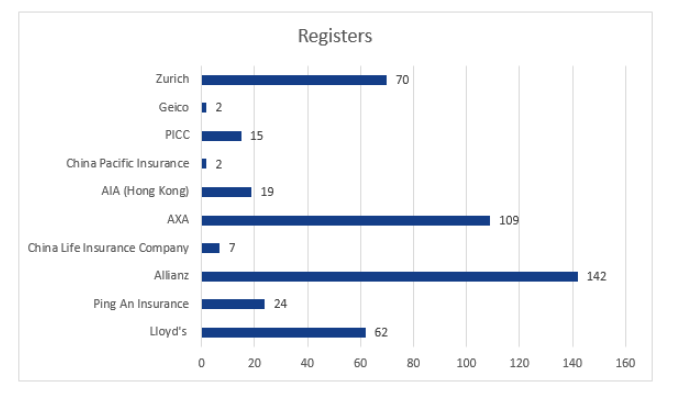 An analysis of Nice classifications for the major insurance brands gives further insight into filing strategy and budding trends. Unsurprisingly, Class 36 (insurance) and class 35 (business services) are the most important. However, a number of other service classes crop up that cover things such as emergency repairs and assistance, software and online assistance, and medical services.

A small spike is also seen in Class 5 as some insurance companies offer medical services in tandem with health insurance, explains CompuMark’s director of custom and managed solutions, Robert Reading. Interestingly, health and life insurance are currently the fastest growing areas of insurtech. 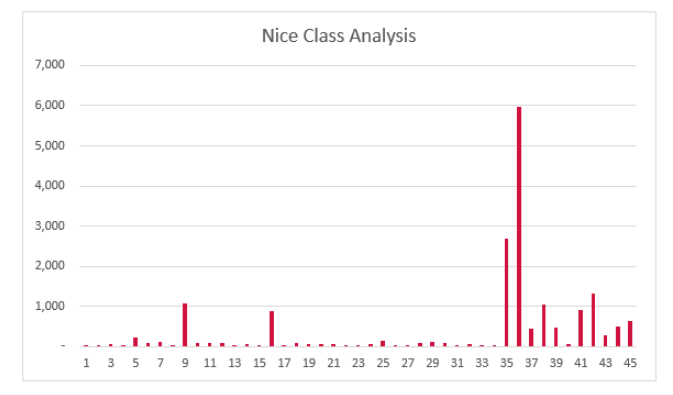 Data and modern technology has changed the insurance sector and allowed smaller players to siphon market share from the bigger players. However, there is undoubtedly room for both. While data and tech is key in offering tailored products and services, at the heart of this is customer service. For insurance companies to build their brands and strengthen relationships with consumers they must prioritise their clients needs, such as solving their problems as quickly and cheaply as possible. Data, at the end of the day, is important, but only a tool to achieving this.