A recent First-tier Tribunal case has provided further guidance on HMRC’s ability to impose daily penalties under Schedule 55 of the Finance Act 2009 for the late filing of an ATED return.

This article provides a reminder of the ATED rules and an update on the imposition of daily late filing penalties following the recent First-tier Tax Tribunal case of Heacham Holidays Limited v HMRC [2020] UKFTT 406.[1]

All companies, whether UK or not, holding UK residential property valued at over £500,000 are subject to the Annual Tax on Enveloped Dwellings ('ATED').

The ATED year runs from 1 April to 31 March. Companies must file an ATED return by 30 April for each year in which they hold UK residential property. For the 2020/2021 ATED year, a return and payment was due by 30 April 2020. If any reliefs are available then an ATED relief return must still be submitted in order to claim that relief. The most common relief is property rental business relief, accounting for 78 per cent of all relief claims based on HMRC’s latest ATED statistics.[2]

Where a relief does not apply, then the company will be liable to pay an annual charge based on the value of the property at the last valuation date.

The annual bands and chargeable amounts for the current ATED year are set out in the table below. 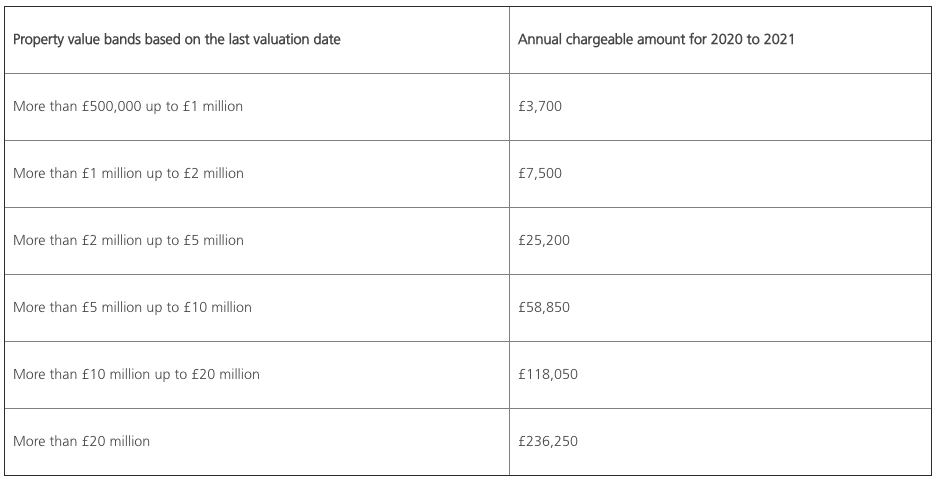 Where a company fails to comply with its ATED obligations HMRC can impose penalties for late filing and (if no relief applies) for late payment of the tax due.

This means that even where a company qualifies for a relief from ATED (and so no tax is due) if it fails to file a return on time to claim the relief then late filing penalties can still be imposed of up to £1,600 per year (assuming the company has not deliberately withheld information).

Penalties for late filing can be broadly summarised as follows:

HMRC may also charge late payment penalties and interest if tax is actually due.

The Case of Heacham

The imposition by HMRC of late filing penalties for ATED was recently considered in the First-tier Tribunal case of Heacham Holidays Limited v HMRC.

Heacham Holidays Limited ('Heacham') should have filed ATED returns in August 2017 and April 2018. The returns were submitted late in January 2019 and daily penalties were retrospectively imposed by a notice of assessment by HMRC in December 2019.

One of Heacham’s arguments was that daily penalties should not be imposed, as the requirements set out in the legislation[3] were not met. In particular, the need for HMRC to prospectively issue a penalty notice ahead of charging daily penalties.

The Judge agreed and held that the notice imposing daily penalties could not be issued retrospectively.

Taking a purposive approach and erring 'on the side of leniency where the matter is concerned with the basis for penalisation', the Judge held that Heacham should not be liable to daily penalties, as such penalties require a notice to be issue prospectively: the purpose of such daily penalties being to incentivise compliance rather than simply to punish non-compliance.

On the facts (as HMRC was not aware of the company’s failure to file a return until the first late return was submitted) it was logistically impossible for HMRC to give notice in time and this is likely to be the case in virtually all instances when it comes to a company filing its ATED return(s) in arrears for the first time.

It will be interesting to see how this decision is treated in subsequent appeals and whether taxpayers will be able to rely successfully on it in their interactions with HMRC. However, there now appears to be clear First-tier Tribunal authority for resisting the imposition of the £900 daily penalties imposed by HMRC for a late filing by a company which has not previously filed an ATED return and where HMRC has not issued a prospective penalty.