From K-pop to Presley: inside the trademark portfolios of the music industry’s biggest names

Beyoncé’s ongoing trademark battle over the term BLUE IVY, the name of her daughter, recently hit the headlines again after she reportedly “refused to hand over private communications with husband Jay-Z and her mother”. We – along with other outlets – have also written at length about the filing activities of Taylor Swift. Clearly, the trademark activity of recording artists is grist to the media mill and there are some musicians who are a step ahead. For others, the need to consider protection in a fast-moving industry provides a potential new client base for law firm practitioners. For this week’s data analysis, we delve into the portfolios and filing trends of both global and local recording artists.

The music industry has experienced decreasing revenues for nearly 15 years, and record labels have responded to the trend by focusing on new forms of growth, particularly through digital innovation (see graph below). These efforts paid off in 2017 with global revenue growing by 8.1%. Streaming revenue became the largest revenue source, growing by 41.1%, with digital music accounting for 54% of total revenue.

Streaming services have had significant impact on the music industry, allowing artists from around the world to tap into new markets and audiences. Asia and Australasia’s local industries have reported their third consecutive year of revenue growth (up by 5.4%), and Latin America’s revenue jumped by 17.7%. China, for the first time, has managed to crack the top 10 music markets ranking (see image below). This was largely driven by deals between large music companies and local businesses, such as Tencent. 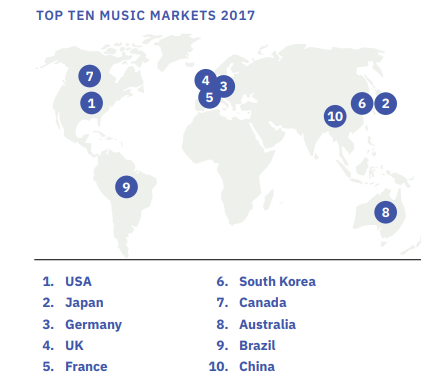 Not only have Asian markets grown in importance, but their musicians have also been successful in cracking western markets, as illustrated by the rise of K-pop. BTS, a group which sings mainly in Korean, became the first South Korean act to achieve gold certification from the Recording Industry Association of America (RIAA) in early 2018, and embarked on a world tour that saw stops in the US, Canada, UK, France and Germany.

The nature of the Korean music industry is quite different than the American and European models. Management companies have strict control over the artists they discover and promote, which appears in trademark protections. According to TrademarkNow, the trademarks of popular K-kop bands are all owned by the record labels, with YG Entertainment as the most common owner. WTR shone a light on this issue in January of last year, when T-ara entered into a trademark battle with its former management agency MBK Entertainment to obtain rights to their name. MBK Entertainment applied to register the term T-ARA at the KIPO on December 28, 2017, and this was around the time that the band had decided to leave the agency. The K-pop group sought to cancel the trademark and promised to continue performing (although earlier in 2017 two members had left), but it seems that since this dispute the band has put out no new music.

Of the musicians analysed by CompuMark’s director of custom and managed solutions, Robert Reading, a majority of the solo performers registered their own marks, and bands used holding companies to handle their IP. For example, The Rolling Stones files under Musidor (based in the Netherlands), the Beatles uses Apple Corps, and ABBA files under Polar Music International.

There are some artists that appear to be a clear step ahead when it comes to IP protection, such as Taylor Swift, who registers some of her lyrics in order to use these terms and phrases exclusively on her merchandise. The “King of Rock and Roll” can also be considered the “King of Trademarks”, Elvis Presley being leagues ahead when it comes to portfolio size of the artists we considered (see graph below). The appearance of 50 Cent so high up on the list is not surprising. He has filed (under his real name Curtis Jackson) marks in a variety of classes, reflecting his entrepreneurial bent - he is known for using his musical fame as a stepping stone to other business ventures, such as video games, and 145 of the marks in his portfolio cover Class 25 (clothing). 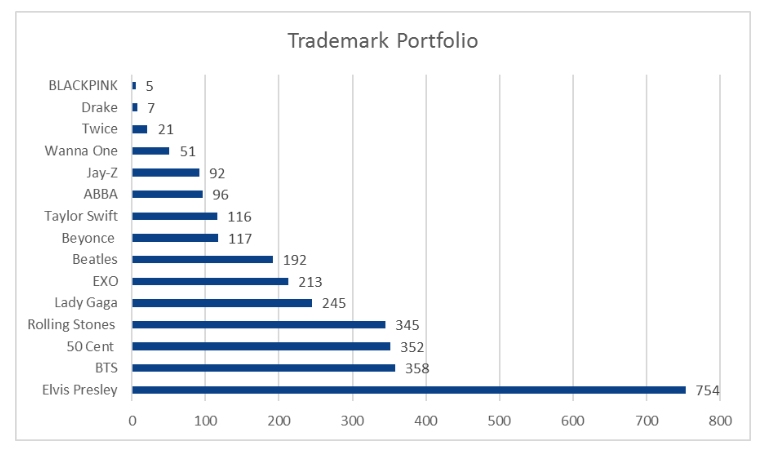 In fact, a number of artists have sought protection outside of the two key industry classes, Class 9 (recorded music) and Class 41 (entertainment) (see graph below). Beyoncé and Lady Gaga have both filed in Class 3 (cosmetics) with 117 and 145 marks covered respectively. Sean Combs, also known as Puff Daddy or Diddy, has a US trademark registration for CUFF-DADDY in Class 14 for cuff links. Other popular classes are Class 16 (printed materials) and Class 28 (toys, games, playing cards).

When it comes to K-pop bands specifically, TrademarkNow uncovered some interesting Nice filings. TWICE has substantial coverage in Class 38 (telecommunications); BTS has filed marks under sporting articles (Class 28), as well as battery chargers in Class 9; EXO has filed for a range of products, ranging from stamps to tissues; and BLACKPINK has filed for Christmas tree decorations (Class 28). Clearly, these artists have identified a way to expand their brands and leverage their profile into new product areas. 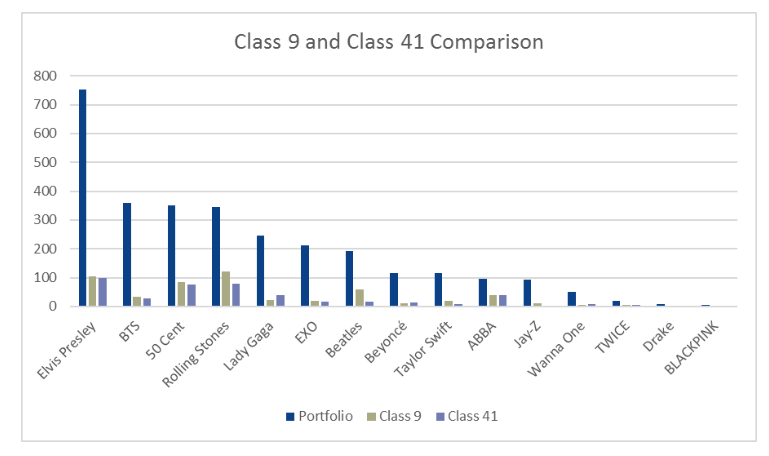 Not surprisingly, a majority of the filings for Elvis, the Rolling Stones and the Beatles were done between the 1980s and 1990s. The earliest ELVIS PRESLEY mark was filed in Japan in 1977, and the earliest Rolling Stones mark dates from 1972, in the UK and Benelux. The Elvis portfolio continues to receive significant attention, having been purchased by Authentic Brands Group. The Rolling Stones continue to actively patrol their mark, and in 2013 sued a retailer for using their mouth and tongue design.

All of the artists with the ten largest portfolios have filed on the EUIPO register. The other key markets that crop up are the US, China, Japan and Australia. Despite the flood of K-pop on a global scale, Korean brands have largely limited protection to their home jurisdiction and neighbouring countries such as Japan and China. BTS and BLACKPINK each have a European registration, and TWICE is registered in the US (see graph below). Drake, a Canadian artist, has only registered his marks in the US. However, it is worth noting that someone attempted to file DRIZZY DRAKE in 2010, but it was successfully opposed by Aubrey Drake Graham (Drake) in 2011. Lady Gaga has the most coverage, with trademark registrations in 100 countries. 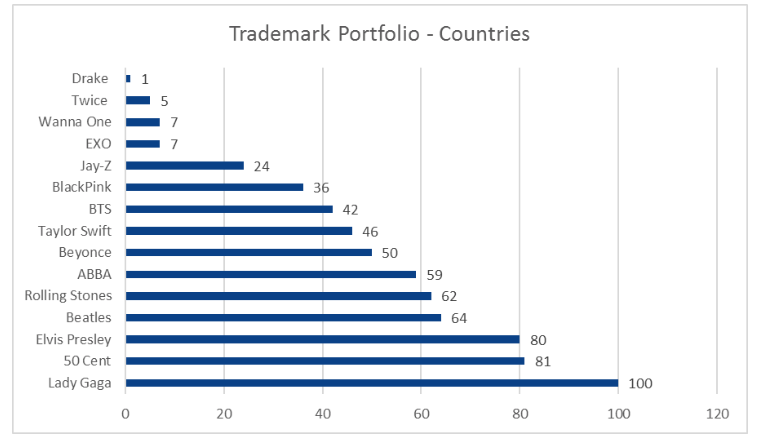 Reading also looked into a number of artists who have no affiliation with record labels. Chance the Rapper is one such individual. He is the first artist to win a Grammy without selling physical copies of his music, interestingly he has zero trademarks. Macklemore & Ryan Lewis sought to sign with record labels but were rejected, so the duo went out on their own. Ben Haggerty (Macklemore), has one trademark registration for MY CITY’S FILTHY in Class 25 for shirts. It was filed back in 2012 and registered in 2014, corresponding with the release of the song.

Wayne Logan, partner at Miller Thomson, and part of the Entertainment and Media division, discussed with WTR some of the unique challenges plagued by bands and solo artists.

One is the tendency of musicians to use their personal name, noting that under most trademark regulations a surname cannot be registered. “If a musician is not able to trademark their name, then they cannot obtain ownership of the name/brand, which means there will be no multiple earnings,” says Logan. This is particularly an issue now as there is a well-known value gap, where musicians are not earning as much profit because of the nature of the industry. This has boosted the importance of merchandise sales.

In the past, ownership of a band’s name has been a critical issue. The Doors and The Beach Boys have both been involved in disputes over their name following break ups or the death of a band member. “In my experience, it is rare that bands put together an agreement which speak about, amongst other things, ownership of the band name,” says Logan. “Even if the band forms a corporation and the musicians are shareholders, there are typically no terms related to the band name/brand in the shareholder agreement. It would be straightforward to include some sort of a clause the shareholders agree to on what would occur with the band name should a member leave.”

Another element to be aware of is social media. There are a number of platforms which bands and musicians promote on, with Logan recommending that bands not only check trademark availability, but look for the domain name, as well as the handle availability on Facebook and Instagram. There is a remedy available should another band crop up with the same name online. “The social media giants have a takedown system of the infringing social media page. The process is to send the infringer a nice request to change the name of their social media page with a deadline and copy them with the trademark registration,” explains Logan. “Then, if not complied with, the social media entity will take down that infringing page – sometimes overnight.”

As streaming – and the ability to instantly tap into a global audience – becomes the norm, musicians will continue to break out of their domestic markets and go global. As such, there are clear opportunities for practitioners to educate and represent these artists on trademark matters. While there are some musicians who have given heavy consideration to IP protection, there are others who have not (with those who have yet to sign a record label – but have gained fame from other media platforms – seemingly most at risk of gaps in protection). Handling the trademark protections of bands will always be tricky business, making it crucial to carry out due diligence when drafting agreements to ensure all bases are covered. However, it could be a lucrative one.