As part of the 2017 Tax Cuts and Jobs Act, Congress decreased the corporate tax rate from a top rate of 35% to a flat 21% rate.

Immediately prior to the reduction, which took effect on 1 January 2018, the United States had the highest statutory corporate tax rate in the developed world, having inherited the title several years earlier when Japan substantially reduced its corporate tax rate effective 1 April 2012.

Former Senator Orrin Hatch (R-UT), who was ranking member and then chairman of the Senate Finance Committee from 2011 through 2018, would many times say, “I want the United States to be number one in many areas but not in having the highest corporate tax rate in the developed world.” The substantial reduction in the corporate tax rate was the centerpiece of TCJA.

Recently, President Joe Biden released his Made In America Tax Plan and the centerpiece on the business side is an increase in the corporate tax rate from 21 % to 28 %. An increase of seven %age points would again result in the United States having the highest statutory corporate tax rate (combined federal and state) in the developed world — focusing on the OECD countries. The chart below is from the Tax Policy Center utilizing OECD data (the newest OECD member, Colombia, was not yet included in the OECD data). For the year 2020, France had the highest statutory corporate tax rate among the 36 OECD countries at 32.0% with Portugal second at 31.5%.

Hungary had the lowest statutory corporate tax rate at 9% with Ireland the second-lowest at 12.5 %. The United States was 11th of the 36 OECD countries at 25.8% (combined federal and state). 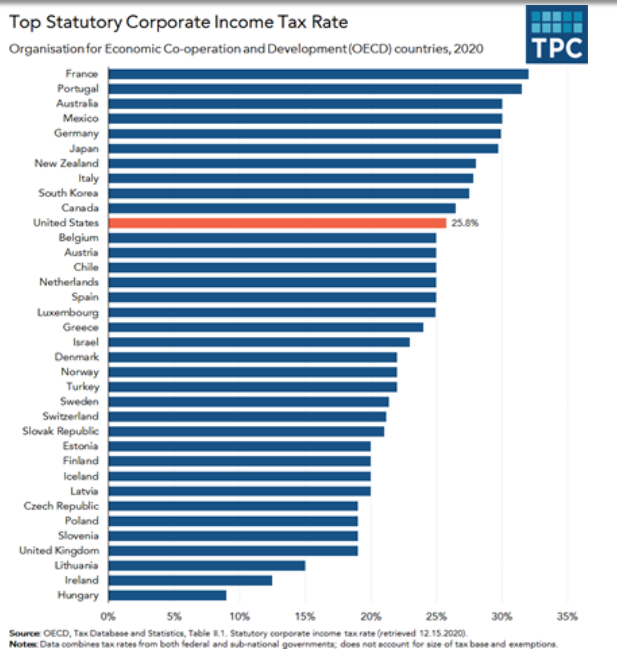 The Biden Administration is developing its views on the efficiency of the corporate tax based on academic research conducted primarily in the last 25 years. During that time, tax scholars have analyzed an additional return on investment — referred to originally as inframarginal returns and more recently as supernormal or excess returns. These supernormal returns are above normal returns that cannot be duplicated — if they could, they would not be supernormal. The Biden Administration views taxing supernormal returns as very efficient, even at high tax rates, because such returns cannot be duplicated. In fact, some tax scholars have noted that such returns could be taxed as high as 99 % and there would still be no change in taxpayer behavior.

Reuven Avi-Yonah, A New Corporate Tax, 168 Tax Notes 653 (27 July 2020). It should be noted that parts of TCJA were enacted focusing on the taxation of supernormal returns, such as global intangible low-taxed income (GILTI), foreign-derived intangible income (FDII), and expensing of tangible depreciable property with a recovery period of 20 years or less. Christopher H. Hanna, Tax Policy in a Nutshell (2018).

It generally is thought that supernormal returns are due primarily to intangible assets and such assets are many times highly mobile. In addition, many corporations are highly mobile in terms of country of incorporation although the enactment of IRC section 7874 in 2004 has deterred but not eliminated corporate mobility. It appears that a high tax on supernormal returns of US corporations could lead to a migration offshore of intangible assets as well as an increase in inversions of US corporations that own intangibles — both to a low-tax jurisdiction. If the US corporate tax rate is increased to 28%, there will be many low-tax jurisdictions relative to the United States — all of the other OECD countries.

It appears that the Biden Administration may be anticipating a possible migration of intangibles to a low-tax jurisdiction by proposing to double the effective tax rate on GILTI (from 10.5% to 21%) as well as applying it on a country-by-country basis. In addition, the Biden Administration also addresses the risk of corporate mobility or inversions by proposing to tighten the anti-inversion rules through reducing the ownership threshold from 80% to 50% in treating a foreign acquiring corporation as a domestic corporation, and also treating a foreign acquiring corporation, managed and controlled in the United States, as a domestic corporation.