Frequently, the fate of a patent application lies with a single patent examiner. This power frustrates applicants when an impasse has been reached in terms of interpretation of the claims, cited art, or patent statutes. However, the applicant has the opportunity to change the decisionmaker by appealing a rejection. Then, the decision-maker changes from the patent examiner to a panel of Patent Trial and Appeal Board (PTAB) administrative law judges (ALJs). This strategy may appear to be particularly advantageous when the applicant believes that allowance prospects with the examiner are slim to non-existent.

Over the last decade, various companies (e.g., LexisNexis Patent Advisor) have begun tracking individual examiners’ allowance rates. An applicant can thus use these generalized probabilities to guide their specific situation and choose prosecution strategy. But the appeal opportunity presents an alternative-choice test: should the applicant remain with Decision-Maker A (the examiner) or Decision-Maker B (the PTAB panel).[1] Statistics with regard to individual panels are not easily available, nor can an applicant predict which ALJs will be on a panel. So how is this decision to be made? Which decision-maker is more favorable for achieving a patent?

This question became all the more pertinent after the 2014 Alice v. CLS Bank decision. In various art units, the prevalence of eligibility rejections skyrocketed as allowance rates plummeted. Many applicants began embarking upon the appeal strategy either in hopes that different decision-makers would more favorably interpret the new case law or that more favorable case law would develop during the appeal-induced delay.

Only recently have decisions been issued on these post-Alice appeals of subject matter rejections, which allows us to evaluate whether these appeals resulted an applicant-favorable decision. While we began this inquiry last year, at that time (as of July 2016), there were only 162 ex parte appeal decisions for which (1) an appeal brief was filed after September 1, 2014 (a date in which Alice was likely to be considered by the Applicant), and (2) a PTAB decision was issued.[2] Our analysis showed that only 16% of the decisions on eligibility rejections were fully reversed.

Now, there are over 10,000 ex parte appeals matching these criteria. We thus reviewed a sample to determine whether similar statistics characterize this thicker data set. More specifically, we reviewed a total of 500 decisions from four Technology Center (TC) groups: TCs 2100, 2400, 2600, and the Business Methods art units (125 decisions from each TC group) to identify which rejections were at issue and rejection-specific PTAB decisions. We additionally reviewed more recent decisions from the larger dataset that had appeal briefs filed after October 2015 for business method art units and after July 2016 for TCs 2100, 2400, and 2600 (n=68 for the business method AUs, n=48 for TC 2100, n=56 for TC 2400 and n=42 for TC 2600). Many applicants would hope that the more recent decisions would have more favorable case law to potentially rely upon. 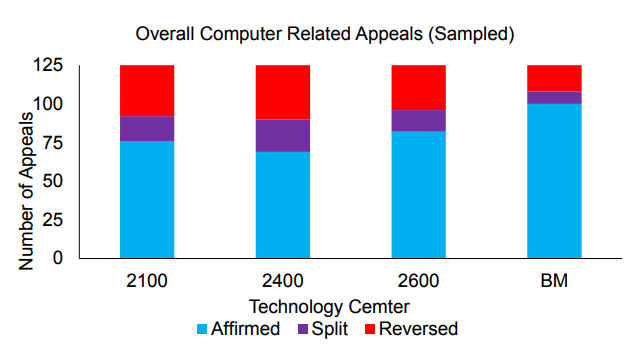 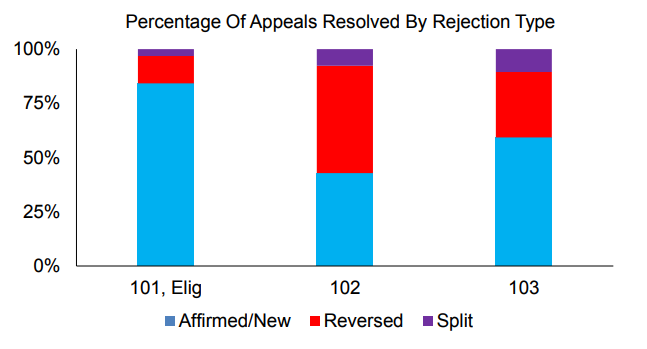 Despite Applicants’ potential frustration with examiners’ eligibility analysis (particularly in the business-method art units), appealing may not offer much relief. Although the Federal Circuit has developed more case law since Alice that identified eligible subject matter (e.g., Bascom, McRO, Core Wireless, etc.), this has not translated into more appeals being successful. Overall, only 16% of subject matter eligibility appeals were successful. For eligibility appeals from business-method art units, that number drops to 7%. While appeals may be an attractive mechanism to present arguments to a new decision-maker, the statistical tendency of the PTAB “decision-maker” may not seem so attractive with respect to § 101 rejections. Thus, appealing § 101 rejections is typically not likely to result in a favorable eligibility decision unless an applicant is equipped with exceptionally strong arguments.