Brewing storm over 'Pacific' fails to blow over appeal court

Craft beer brewer Stone & Wood fails in appeal against an earlier judgement that the terms 'Pacific ale' and 'Pacific' used by rival brewer Elixir Signature did not infringe its trademark registration.

In Stone & Wood Group Pty Ltd v Intellectual Property Development Corporation Pty Ltd ([2018] FCAFC 29, March 9 2018), Australian craft beer brewer Stone & Wood has failed in a Full Federal Court appeal against an earlier decision which found that use of the terms 'Pacific ale' and 'Pacific' by rival brewer Elixir Signature did not infringe Stone & Wood’s trademark registration, or amount to passing off or misleading or deceptive conduct.

The primary issue on appeal was whether use of the terms 'Pacific ale' and 'Pacific' by Elixir amounted to passing off or misleading or deceptive conduct. Stone & Wood argued that Elixir had committed passing off as it had sought to establish a connection or association between the beers of the parties or between the parties themselves.

Examples of the parties’ respective beer bottles are set out below: 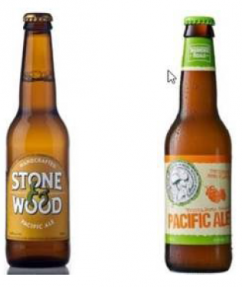 The Full Federal Court noted the primary judge’s finding that Stone & Wood had acquired a reputation in STONE & WOOD PACIFIC ALE, but not in PACIFIC ALE alone.

The court also commented that the fact that consumers do not necessarily understand the term 'Pacific ale' to describe a style of beer does not detract from Stone & Wood’s use of the term being somewhat descriptive in nature, or detract from the term’s capacity to evoke descriptive meanings.

It concluded that the appeal did not raise any errors in the primary judge’s findings, and the appeal was accordingly dismissed.

Interestingly, a related dispute between the parties before IP Australia recently saw a delegate find in Stone & Wood’s favour in an opposition regarding the distinctiveness of the plain word mark PACIFIC ALE.

Elixir has appealed this decision to the Federal Court, so the dispute between the parties will continue to bubble away.

This ongoing dispute highlights the risks that can arise when a trademark owner adopts a trademark which is perhaps not overly distinctive, and uses the trademark in a way which may be understood as indicating that the trademark has descriptive connotations.

Obtaining strong trademark registrations for such trademarks can be difficult, as will be enforcing rights against competitors who adopt trademarks in order to benefit from a market or arguably descriptive term developed by the trademark owner.