Under Armour has won a major victory against the Chinese sportswear company Fujian Ting Fei Long Sports Products Co Ltd, which had used confusingly similar logos to Under Armour (see below) for its Uncle Martian branded sports footwear. The People’s Higher Court of China’s Fujian Province ruled in favour of Under Armour, finding that Ting Fei Long’s acts constituted trademark infringement and unfair competition, and awarded the plaintiff Rmb2 million (approximately US$300,000). This case is also important because of the preliminary injunction awarded before the matter was tried in full.

In May 2016, Fujian Ting Fei Long launched its line of sports footwear under the brand Uncle Martian, using a series of logos which were confusingly similar to Under Armour’s logos (see below). Under Amour applied to the People’s Higher Court of Fujian Province for a preliminary injunction and lodged a lawsuit against Ting Fei Long, claiming Rmb100 million for trademark infringement and unfair competition.

The parties’ marks are set out in the table below: 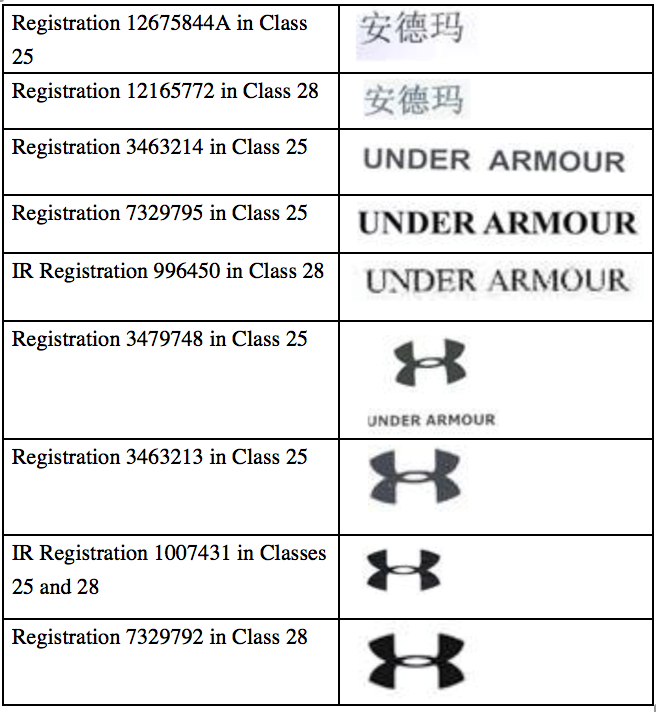 The defendant, Ting Fei Long, was a seasoned copycat and its infringing acts were flagrant. It acquired Registration 15151285 and Registration 3951618 (see below) from third parties, split and then re-combined the constituent elements of the two registrations. It also used a shell company, Under Amour (China) Co Ltd, registered in Hong Kong to promote its products, claiming that its operation of the Uncle Martian brand was authorised by Under Amour (China) Co Ltd, and tried to create a high-end image for the Uncle Martian brand. This is a classic scenario for serial pirates. The Chinese and English trade names of the shell company were identical to Under Armour’s registered marks 安德玛 and UNDER ARMOUR respectively. In addition, Ting Fei Long used the ‘I Want’ slogan which was arguably an imitation of Under Armour’s ‘I Will’ slogan.

In its judgment the higher court held that:

The Higher Court then ruled in favour of Under Armour, ordering Uncle Martian to:

From the Michael Jordan case to the New Balance case, trademark squatting in the field of sporting apparel and footwear has become a very active space for pirates in China. Under Armour’s victory in this case shows the Chinese courts’ increasing determination to stop such wrongful acts of imitating well-known international brands in order to take unfair advantage of the goodwill built up by the legitimate brand owners.

Another point worth noting is the application by the courts of the remedy of a preliminary injunction in IP infringement cases, which can be an effective method for IP rights’ owners to prevent further or irreparable harm that may be caused by the infringing acts. In this case, the Higher Court approved Under Armour’s application for a preliminary injunction, and ordered the defendant to stop manufacturing, selling or advertising shoes and clothes using the contested marks immediately, before the case was heard and decided.

This case is yet another victory for brand owners which are concerned about protecting their brand value when they venture or expand further into the Chinese market.