Recently, several of the presidential candidates and other prominent Democrats have suggested a number of different tax policy proposals, including wealth taxes, mark-to-market taxation, a VAT, additional taxes, increased income tax rates, and increased gift and estate taxes. This chart illustrates the various proposals, and this blog summarizes them.[1] 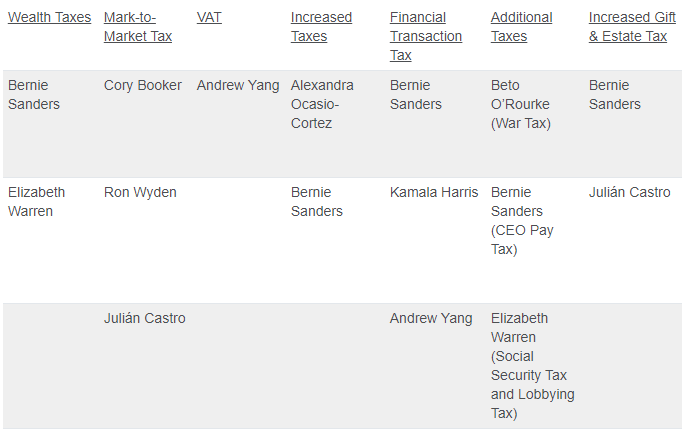 The chart below compares the two proposals. 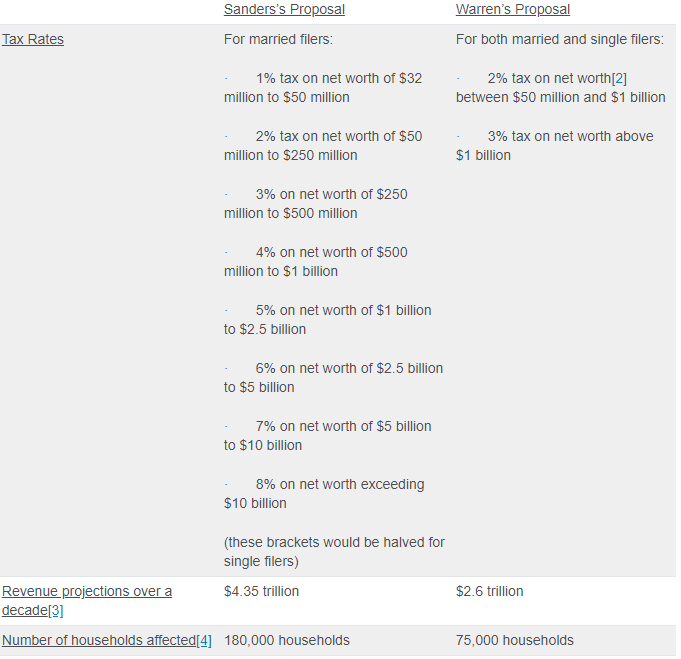 Sen. Ron Wyden (D-Ore.) and presidential candidates Sen. Cory Booker (D-N.J.) and Julián Castro have each proposed “mark-to-market” taxes on wealthy and high-income individuals. Each of these proposals would tax unrealized gains in publicly-traded property, and would impose an additional tax upon the sale of nontraded property. Each of the proposals would also increase the capital gains rate so that it is equal to the ordinary income rate for these taxpayers.Ron Wyden’s, Corey Booker’s, and Julián Castro’s Mark-to-Market Proposals

Wyden’s mark-to-market proposal would apply to individuals, estates or trusts with income in excess of $1 million or assets exceeding $10 million in each of the three prior tax years.[5] For purposes of determining whether the $10 million asset test is satisfied, the first $2 million of combined value of a taxpayer’s primary and secondary personal residences would be excluded, the value of a taxpayer’s operating family farm would be included only to the extent it exceeds $5 million, and the first $3 million of a taxpayer’s retirement savings would excluded.

These taxpayers would be required to “mark-to-market” their publicly-traded assets on an annual basis and pay a tax on any appreciation (or take a loss on any depreciation) at the end of the tax year as if they had been sold.

In addition, a “look-back charge” would be imposed on gains from non-publicly traded assets like closely-held businesses, investment real estate, and art and collectibles, upon a realization event, which would generally include any transfers of these types of property or the death of the owner. The look-back charge would minimize any benefit of deferring the tax until disposition of the asset. However, the proposal requests comments as to whether the look-back charge should be an interest charge on deferred tax, a yield-based tax, or a surtax based on an asset’s holding period.

Proceeds from the primary and secondary residences of a taxpayer only in excess of $2 million, and proceeds from a family farm only in excess of $5 million, would be subject to the look-back charge rule. Wyden’s proposal would not apply to assets held in tax-preferred savings accounts, which would continue to be taxed in the same manner as under current law.

Wyden’s proposal would also include transition rules that would require taxpayers to pay tax on pre-proposal built-in gains over an unspecified period.

Cory Booker has proposed a mark-to-market tax that would apply in a manner similar to Wyden’s.[6]

Booker’s proposal would impose a mark-to-market tax on publicly-traded assets and a yield-based tax upon the sale of non-traded assets. The yield-based tax would result in the same tax as for the owner of publicly-traded property, assuming each appreciated on a constant basis, and the taxpayer sold stock with a value equal to the tax in each year. Booker’s plan would allow taxpayers to prepay taxes to minimize the yield-based tax. Realization for these purposes would include death and transfers to other family members and entities as well as gifts of appreciated property to charities. Booker’s proposal would also repeal section 1031 (the “like-kind exchange”) which permits taxpayers to exchange real estate tax-free.

Julián Castro has also proposed a mark-to-market system for the wealthiest 0.1 percent of taxpayers.[7]

Like Wyden’s and Booker’s proposals, Castro’s tax would be imposed annually on the unrealized gains of publicly-traded securities, regardless of whether the securities are sold. Castro’s plan also contemplates an unspecified look-back tax on the sale of nontraded property, similar to Wyden’s. Realization would include death and transfers to family members. 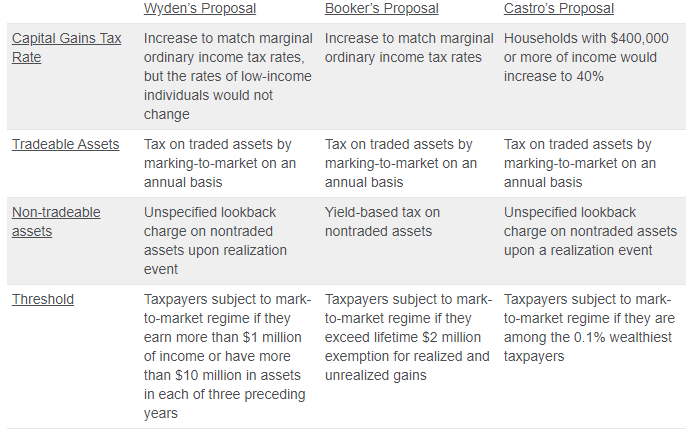 Yang estimates that the VAT would generate $800 billion in new revenue.

The revenue would be used to provide every U.S. citizen over the age of 18 with a guaranteed income of $1,000 per month regardless of income or employment status, which Yang calls a “freedom dividend.”

Sanders also proposes to cap itemized deductions at 28% for households making over $250,000, and to repeal the 20% “pass-through deduction”.

Sanders proposes to restore the corporate tax rate to 35% (from 21% currently), treat large master-limited and other partnerships as corporations for tax purposes, eliminate expensing and accelerated depreciation for corporations so that investments are depreciated based on their economic life. Sanders would also limit the interest deductions of corporations to 20% of adjusted taxable income, and tighten the related party rules.[9]

Sanders would further restrict inversions by limiting interest deductions (presumably only for inverted corporations) to 105% of a U.S. corporation’s share of net interest expense over worldwide income (presumably based on the group’s income).

Sanders would also treat companies that are managed and controlled in the United States as domestic corporations, and would drastically expand the definition of an “inverted corporation” to one owned by 50% of the same (presumably U.S.) shareholders after a merger.

Sanders would retain the “base erosion and anti-abuse tax” (BEAT) but increase the rate to 17.5% (from 10%), and exclude deductible payments that give rise to includable U.S. income. He would repeal the reduced 13.125% tax rate for “foreign derived intangible income” (FDII), and deny U.S. foreign tax credits for excise tax payments by oil, extractive, gambling, and other companies.

Finally, Sanders would require corporations with revenues over $25 million to publicly disclose significant portions of their tax returns and country-by-country financial information.

Rep. Alexandria Ocasio-Cortez (D-N.Y.) has suggested that the top marginal income tax rate could be raised as high as 70% as part of her “Green New Deal”.

The Washington Post reported that a tax rate of 70% on income over $10 million could raise an additional $720 billion of new revenue over a decade.[10]

Beto O’Rourke (D-Texas) has proposed an additional “war tax” as part of a broader initiative to improve care for veterans.[12]

Each Congressionally-authorized war would trigger a separate ‘“war tax,” covering the entire duration of combat activities. The revenue generated from the war tax would go into a new trust for veterans established at the outset of each war. The trust funds would support hospital care, medical services, disability compensation and any other programs directly related to the care of veterans of that war.

The war tax would be levied on households without current or veteran members of the armed forces and implemented on a progressive basis as shown below. The policy has no stated exemptions for low-income taxpayers.

Bernie Sanders has also proposed to impose additional taxes on corporations based on the ratio of its CEO’s compensation and its median employees’ compensation. His plan would apply to publicly and privately-held companies with annual revenue of $100 million or more.Bernie Sander’s Exorbitant CEO Pay Tax

Sanders estimates that if median worker pay is increased to $60,000 a year and CEO pay is capped at $3 million, no additional tax would result. However, if corporate behavior does not change, Sanders estimates that the proposal would generate an additional $150 billion in revenue over a decade. This revenue would be used to pay for Sander’s proposal to eliminate medical debt.

Warren has proposed a new 14.8% contribution requirement on annual earnings of $250,000 (or $400,000 for joint filers), split evenly between employers and employees. She would also impose a separate 14.8% tax on net investment income of taxpayers who meet those thresholds. The revenue would be used to fund the Social Security Trust Fund and permit current and future recipients of Social Security to receive an additional $200 in monthly benefits.

Booker also has proposed to restore the estate tax structure to 2009 levels and rates by lowering the threshold value of estates subject to the tax to $7 million for married taxpayers from the current $22.8 million threshold.

Sanders would also reduce the threshold value of estates subject to estate tax to $7 million for married taxpayers. In addition, the existing flat 40% estate tax rate would be replaced with the following progressive rates:

Sanders also proposes to (1) change the rules for “grantor retained annuity trusts” (“GRATs”) and other types of trusts and valuation techniques, and (2) increase existing protections for farmland and conservation.

Julián Castro would replace the estate and gift tax with an income and payroll tax on inheritances in excess of a $2 million lifetime exemption. Castro estimates that the new inheritance tax would generate $250 billion in revenue over 10 years.

Wyden’s and Booker’s mark-to-market proposals apply to many more taxpayers than either wealth tax. Castro’s proposal is limited to the top 0.1% wealthiest individuals. Each of the proposals would impose tax on appreciated holdings, but not on labor (which is currently subject to current tax at the highest marginal rates). Thus, the proposals generally equalize the tax treatment of labor and capital. Each of the mark-to-market proposals would be relatively easy to apply to publicly-traded assets, but would be more complicated to apply to non-traded assets. Mark-to-market taxation is widely believed to be constitutional but still may be subject to challenge. A look-back regime or yield-based tax for nontraded assets may raise less revenue if taxpayers anticipate that it will be repealed by a future Congress and delay realization until after repeal.[14]

Andrew Yang’s VAT would apply to all Americans, including low and middle-income taxpayers. Although VATs are generally regressive, the regressive effect of Yang’s VAT is offset somewhat by the use of the revenue to pay his freedom dividend.

The financial transaction taxes proposed by Sanders, Harris and Yang would fall disproportionately on the wealthy (who have more financial assets) but it would also be borne by foreigner taxpayers, who hold about 20% of U.S. long-term securities.[15] A financial transactions tax does not present significant valuation difficulties because the tax is imposed when the securities are sold or exchange. It also would not face constitutional challenge.[16] However, it could affect market liquidity and would be borne to some extent by the middle class.