The fate of post-Brexit jurisdiction clauses

Brexit is prompting companies to ask themselves many legal questions. One of them is the fate of jurisdiction clauses.

You are a professional and party to a contract where one party is British and the other is a member of the European Union ("EU"). The contract contains a jurisdiction clause.

You are aware that the United Kingdom’s withdrawal from the EU prevents the application of the Brussels I bis Regulation1 to your contract after January 1, 2021, and you wonder whether your jurisdiction clause remains effective.

The answer is twofold:

The table below shows whether the Convention applies to your clause and what the consequences are.

The legal regime applicable to your jurisdiction clause: the 2005 Hague Convention or the domestic laws of the seized court?

There is a jurisdiction clause in a contract between a UK party and a party domiciled in a EU member state: how effective is this clause after January 1, 2021? 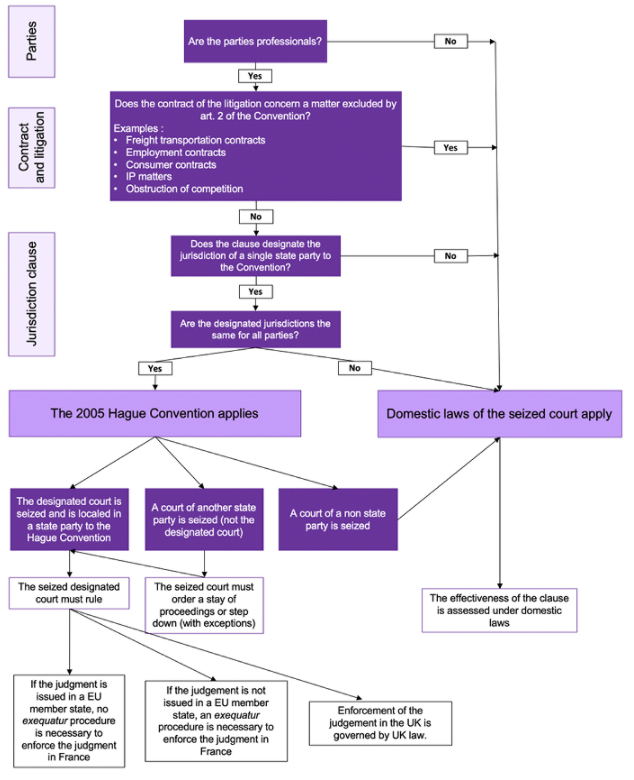 In order to determine which regime is applicable to your jurisdiction clause, you should pay particular attention to the following key elements:

States parties to the 2005 Hague Convention: EU member states, Mexico, Montenegro, Singapore and the United Kingdom (whose application to join as an autonomous country dates back to September 28, 2020).

Professional: The Convention does not apply when one of the parties is a natural person acting primarily for personal, family or household purposes.

Exclusivity: The clause is exclusive when it designates the jurisdictions of a single state party.

Unilateral clause: when the clause applies to only one of the parties. These clauses are excluded from the scope of the Convention.

Asymmetrical clause: where the clause provides that one party may bring proceedings in more courts than the other. These clauses are excluded from the scope of the Convention.

Excluded matters: Article 2 of the Convention (link) excludes from its scope about 20 subject matters. We invite you to check that your dispute does not concern an excluded matter.

As a reminder, the clauses excluded from the Hague Convention regime will be examined according to the domestic laws of the seized court.

Will the provisions of the Brussels I bis Regulation be reactivated under the 2007 Lugano Convention?

In conclusion, as it stands, it is the Hague Convention (or the domestic laws of the seized court) that is used to determine the validity of the jurisdiction clause. But this may change.

The 2007 Lugano Convention3 allows for the application of a regime identical to that of the Brussels I bis Regulation between the EU and the signatory states (i.e. for the time being, the European Free Trade Association (EFTA), which includes Iceland, Liechtenstein, Norway and Switzerland).

The United Kingdom applied to join the Lugano Convention on April 8, 2020. Its accession is conditional upon the unanimous consent of all member states, and the EU has not yet consented (Client alert of April 19, 2021).

The Lugano Convention guarantees, among other things, that decisions rendered in one of its contracting states are recognized in the other contracting states, without the need to resort to any exequatur procedure4. For now, the enforcement of foreign judgments in the UK is governed by UK law.

In the meantime, one must remain cautious.

To view all formatting for this article (eg, tables, footnotes), please access the original here.
Dentons - Aurélien Chardeau
Back Forward