Middle East dealmaking has been trending up steadily over recent years, reaching the highest annual volume on record in 2021. Annual deal value, meanwhile, posted its second highest figure on record, after 2019, with US$120.7 billion spent across 409 deals. 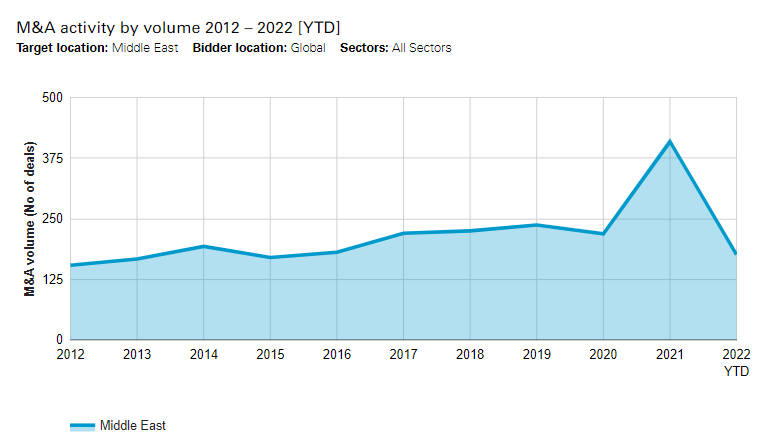 Despite a dip in dealmaking witnessed across the globe, activity has remained strong in 2022. While volume is down compared to a record 2021, a total of 176 still stands above average H1 volumes to-date, while a deal value of US$54.6 billion has already overtaken all annual deal values pre-2018.

Much of this activity was due to overseas bidders, with cross-border deals accounting for 65% of overall value in H1. Deals conducted by foreign acquirers have escalated over recent years, reaching an all-time high of US$93.5 billion spent across 219 deals in 2021.

Israel, historically a center for dealmaking in the region, was the most targeted country in H1, both in terms of value and volume, having recorded its highest annual volume and value on record in 2021. A total of 107 deals valued at US$28.6 billion announced in the first half of 2022—while down from record 2021—still stands well above pre-COVID levels of activity.

US interest in Israel’s thriving tech sector fueled activity during the first half of the year. The highest valued such deal was US tech multinational Intel’s purchase of Tower Semiconductor, valued at US$5.8 billion. The deal is meant to boost Intel’s supply chain in order to meet growing semiconductor demand through strengthening its newly created Intel Foundry Services (IFS)—a separate business unit providing manufacturing capacity both for itself and other semiconductor manufacturers.

Israeli gaming start-ups were also hotly targeted in H1, reflecting an increase in global demand amidst the pandemic. The largest such deal was US-based Unity Software’s merger with Ironsource, an app monetization platform that provides tools for ads, cross-channel marketing, and distribution. Unity provides software tools for use in game development.

The all-stock deal, valued at US$4.5 billion, reflects a shift in the market. While the Israeli ecosystem has reportedly produced 52 new unicorns during the first half of 2021, those start-ups that proceeded to IPO have reportedly since lost some 50%-70% of their valuation this year due to the global economic downturn and its effect on stock prices. The volatility of public markets has meant that sales to trade buyers have emerged as a more attractive alternative for start-ups seeking to maintain stable growth in a challenging market.

Israel’s tech sector was also a target for US-listed SPACs during the first half of the year—particularly in high-growth areas such as cybersecurity and online travel. In the highest valued SPAC deal in the region to take place in H1, US-listed Mount Rainer Acquisition Corp merged with HUB Cyber security, a developer of confidential computing solutions for enterprises and governments, in a deal valued at US$1.6 billion. The merger will provide HUB with approximately US$198 million in additional cash as it seeks to expand into the US market and list on the Nasdaq stock exchange.

Another notable deal was US-listed SPAC Moringa Acquisition Corp’s merger with online travel booking platform Holisto, valued at US$405 million. The Israeli start-up is disrupting the fragmented and complex online travel booking industry through the use of AI technology, providing consumers with a more affordable and personalized offering. The opportunities for expansion are significant, with the global online hotel booking market forecasted to be worth US$194 billion in 2022.

The UAE saw the second highest level of M&A in the Middle East in H1, both in terms of volume and value, with US$16.2 billion spent across 40 deals. This deal value has already overtaken 2021’s annual total of US$15.2 billion, with six months of dealmaking left in the year.

The country attracted some significant deals from overseas investors targeting a range of sectors. A total of US$12.5 billion spent by foreign acquirers accounted for 77% of total deal value targeting the country in H1.

One such deal was global investment group Caisse de dépôt et placement du Québec (CDPQ)’s investment in DP World’s Jebel Ali Port (JAP), Jebel Ali Free Zone (JAFZ) and National Industries Park (NIP). The deal, valued at US$5 billion, will help DP World, a state-owned company, cut down its debt. The three assets, estimated to have an enterprise value of approximately US$23 billion, provide supply and logistics chains to more than 8,700 companies across the world.

Another significant transaction that signals international interest in the UAE market is UK investment firm Actis’ purchase of a 50% stake in Emirates District Cooling (EMICOOL) from Dubai Investments, valued at US$504 million. Through the deal Actis, a leading investor in sustainable infrastructure, will form a JV with EMICOOL, helping to expand its services in sustainable and efficient district cooling services across the wider MENA region.

The macroeconomic outlook for the Middle Eastern economies is positive, with GDP growth predicted at 5.2% in 2022, up from 2.9% in 2021. Yet fears of a recession among large world economies such as the US and UK—traditionally active buyers in the Middle Eastern market—potentially threaten to derail deals.

Despite a darkening global outlook, the healthy amount of overseas investment in the region in the first half of the year signals that the region remains a favored destination for overseas buyers, with the tech, transport and sustainable infrastructure sectors set to attract considerable interest.