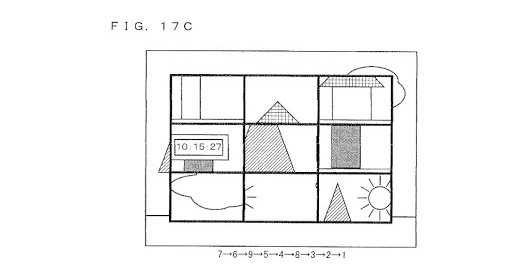 Summary: U.S. Patent No. 8,858,328 (the ‘328 Patent) describes a game that uses real pictures as the basis for the puzzle. Using the Nintendo DSi, the player takes a picture that the system converts into the puzzle. The system divides the image into sections assigning each section a number. The numbers corresponded to the sections’ original location. Once the system determines the starting points, it shuffles the sections. The player must rearrange the picture sections to their original position to complete the puzzle. Players can adjust the difficulty by increasing the number of sections.

Abstract: An information processing section of a game apparatus executes a program including: a step of setting a puzzle area to be cut from an image taken by an outer camera; a step of setting the division number representing the number of portions into which the puzzle area is divided in accordance with a stage; a step of generating one-dimensional arrangement data representing a state in which puzzle pieces are positioned at random: a step of executing a game process by updating the one-dimensional arrangement data of the puzzle pieces which are selected based on a tilt of the game apparatus; and a step of switching, in accordance with the one-dimensional arrangement data, texture coordinate data of the puzzle pieces calculated based on a tilt of a virtual camera, and displaying an obtained image.