The announcement will not only present new opportunities for foreign investors, it will also allow Chinese businesses to attract foreign capital in new and exciting ways. Overtime, it should result in greater foreign participation in China’s financial markets and financial services sector, which can lead to greater competition, more innovation and better quality of service.

More specifically, the QFII scheme enables a broad range of foreign institutional investors to use their offshore foreign currency for investing in China’s financial markets, while the RQFII scheme is a modified version of the QFII scheme that facilitates the use of RMB held outside mainland China for investing in those markets. The investment restrictions and procedures under the QFII and RQFII schemes have been gradually relaxed since their launch in 2002 and 2011 respectively. According to official statistics, more than 400 institutional investors from 31 countries and regions have invested in China’s financial markets through the (R)QFII scheme. 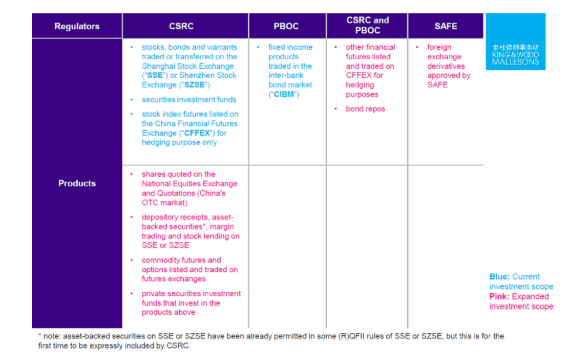 The market’s reaction to the CSRC consultation papers has been positive, especially in relation to the onshore futures market. To date, only four types of onshore futures contracts (crude oil, iron ore, PTA and TSR20) have been opened to foreign investors through a direct access model, as opposed to the (R)QFII scheme. In the near future, it is expected that the range of onshore commodity futures available to (R)QFIIs would be significantly broadened.

In addition, foreign investors looking to access the Chinese non-performing loan (“NPL”) market are also considering using the (R)QFII scheme to invest in asset-backed securities or notes that are listed on the onshore exchange market and the China Interbank Bond Market (“CIBM”) where the underlying assets are NPLs and other credit assets. We also expect that an increasing number of PRC companies will be seeking to attract foreign fixed income investors by way of issuing to (R)QFIIs private placement bonds or notes, asset-back securities and other financial instruments that are listed on the CIBM or the onshore exchange market. Please refer to our paper “China’s NPL and ABS Markets: A Guide to Foreign Investors and Financiers – Part II” for further information on this topic.

QFIIs – Generally, the following types of foreign investors are eligible to become QFIIs:

To be eligible, the foreign investor must also meet certain qualitative and quantitative requirements.

RQFIIs – Generally, the following types of foreign investors are eligible to become RQFIIs:

Even if a foreign investor does not fall into any of the above categories, it can still indirectly benefit from the (R)QFII scheme by: (1) investing in an open-ended fund managed by an (R)QFII; or (2) opening a segregated Discretionary Management Investment Account (“DIMA”) with an (R)QFII acting as the investment manager.

In other words, an (R)QFII can deploy three types of funds into the Chinese financial markets: the (R)QFII’s proprietary funds, funds raised from an open-ended fund managed by the (R)QFII and the funds entrusted by investor(s) in a segregated DIMA.

As a result of the SAFE’s recent announcement, (R)QFIIs will no longer be required to apply for any investment quotas from SAFE. Instead, it is expected that a new (R)QFII only needs to make a SAFE registration with assistance from its onshore custodian. The SAFE registration will be used to open onshore cash accounts and accommodate the remittance and repatriation of funds onshore. Furthermore, aggregate investment quota limits that apply to a specific foreign country or region will also be removed.

SAFE’s announcement did not specify when the removal of investment quota limits will take effect. However, SAFE stated that will amend the relevant rules and regulations as soon as possible to implement its decision, which has already been approved by China’s State Council.

It is worth mentioning that, effective from June 2018, the repatriation of capital and profits out of China by an (R)QFII is no longer subject to any lock-up periods or limits. However, we note that SAFE reserves the right to implement macro-prudential supervision with respect to (R)QFII repatriations in light of China’s national economic and financial situation, the supply and demand in the FX market and the status of international balance-of-payments.

(R)QFIIs are also allowed to enter into derivatives for the purpose of hedging the FX risks associated with their onshore investments, provided the hedge is reasonably correlated to their actual FX risk exposure.

Recently, more and more (R)QFIIs are looking to better utilise and leverage their (R)QFII investments. For example, one of the hottest topics is whether and how an (R)QFII can create security interest over its onshore investments for the purpose of obtaining financing (including from an offshore financial institution).

This is an innovative area and we recommend (R)QFIIs who are interested in this topic to consider a number of threshold questions, including: