Senate Acts to Remove Trump-Era Methane Rule, Opening the Door to Further Regulation of Methane from Oil and Gas Activities

On April 29, 2021, the Senate passed a resolution (the “Resolution”) to disapprove a rule adopted by the Trump administration which lifted certain requirements that had been put in place by an Obama-era methane rule, also known as “Quad Oa.” If passed by both chambers of Congress and signed by the president, as expected, the Resolution would undo the Trump administration’s 2020 rollback of the Obama-era methane rule, which is described in greater detail in this previous post. In the absence of this Trump-era roll-back, the Obama-era Quad Oa regulations will go into effect unless halted by the courts.

This will be the first time that Democrats in the new Congress have used the Congressional Review Act (“CRA”) to overturn a regulation. The CRA allows a new administration to swiftly overturn the prior administration’s last-minute regulations by a simple majority vote in both chambers of Congress and the signature of the president. It may only be used to overturn regulations that have been adopted within the past 60 legislative days. The CRA also contains a provision that prevents future administrations from enacting regulations similar to those overturned by the CRA without congressional approval. In 2017, congressional Republicans used the CRA to undo 16 Obama-era regulations. Use of the CRA in this case is part of the Biden administration’s broader review of the Trump administration’s environmental policies, consistent with an Executive Order signed on President Biden’s first day in office. The 60-day window to use the CRA will expire in late May.

What is the Difference Between Quad Oa and the Trump Methane Rule?

Quad Oa was the first time EPA had regulated methane from the oil and gas sector, and the rule applied to upstream, midstream, and downstream operations. Before then, EPA had only regulated VOCs from the sector, and since VOCs and methane both come from natural gas leaks, the previous regulations (Quad O) had the effect of also limiting methane emissions. By explicitly regulating methane as a separate air pollutant, Quad Oa acted as a stepping stone to additional methane regulations in the future. While Quad Oa applied only to new or modified sources after the rule’s effective date, releasing the rule triggered an obligation to regulate methane from existing wells and equipment as well. The Trump-era methane rule removed some of the regulatory requirements that industry considered burdensome, including leak monitoring and repair, and recordkeeping and reporting requirements. Among the biggest changes was removing the transportation and storage sectors (including midstream or pipeline companies) of the oil and gas industry from VOC and methane regulation entirely.

This graphic shows the scope of regulation under the Trump-era methane rule: 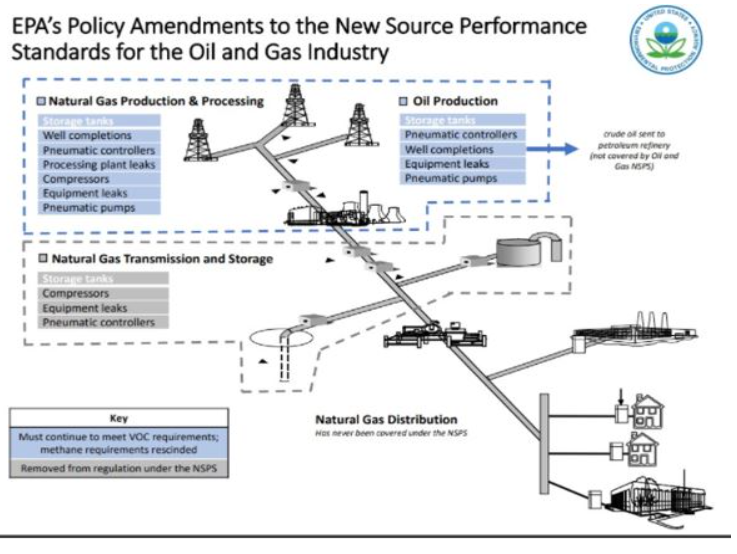 Impact of the Resolution on the Oil and Gas Industry

If the Resolution is passed, (1) the industry will once again be subject to the requirements in Quad Oa, and (2) EPA will be obligated to pursue methane regulation of existing sources.

The Return of Quad Oa: The federal government’s regulation of methane emissions from the oil and gas industry has been in constant flux due to shifting agency positions between different administrations and lawsuits challenging those shifts. As a result, the industry has not yet had to comply with the new requirements put into place by Quad Oa. These lawsuits were paused once the Trump administration revisited the rule, but they are likely to become active again now that Quad Oa is once again poised to take effect. In its recission of Quad Oa, the Trump EPA also explained that “Clean Air Act requires EPA to make a formal finding that a pollutant contributes significantly to air pollution before setting NSPS requirements. Since the Obama EPA did not make this finding, the addition of the transmission and storage segment to the oil and gas category and the additional methane control requirements in the 2016 rule were inconsistent with the law.”  This same argument is likely to be pursued in the lawsuits.

Regulation of “Existing” Sources: Both the Trump administration’s methane rule and its predecessor under the Obama administration applied only to certain new or modified sources in the oil and gas industry. While new/modified sources are a limited subset of all sources of methane in the sector, promulgation of the methane rule triggered an obligation for the EPA to regulate methane from existing sources, as we have explained previously.1 Regulation of existing sources would result in a much larger long-term impact on the oil and gas community. When revising Quad Oa, the Trump EPA admitted that it had a mandatory duty to issue guidelines for states to regulate methane emissions from existing resources in the oil and natural gas sector when Quad Oa was originally published, but determined that because Quad Oa had been revised to no longer apply directly to methane emissions, it no longer had either the authority or a duty to issue methane guidelines for existing sources.2 Now that Obama-era Quad Oa is poised to be back in effect, expect the EPA to begin collecting information as a first step toward regulating methane from existing oil and gas sources.