What are the challenges for digital agriculture in Australia?

Does a ‘connectivity threshold’ exist in regional and rural Australia where connectivity becomes an enabler of digital agriculture, rather than a drag on it?

Connectivity to support digital agriculture is required across the entire farming operation, and not just at the homestead: connectivity out in the paddock for soil moisture probes; down by the creek, dams and bores for real time monitoring of water usage; on the move around the farm as digitally tractors work; and above the farm as drones strike at weeds.

However, the report found that across the country, beneath the broad brush strokes of mobile coverage and National Broadband Network (NBN) fixed and wireless networks, there are localised connectivity gaps on, across and between farms. The report called this patchiness ‘salt and pepper connectivity’.

Salt and pepper connectivity, in human geography terms, is all about scale. Salt and pepper connectivity is experienced not at the national or state level or even local government area level, but at the local community level, with variability between neighbouring farms or even across an individual farm. The report provides a case study of Tony, a cotton farmer 8kms outside Narrabri. In an effort to achieve greater water efficiency, Tony has spent $1.5 million on a large lateral irrigator with an onboard SIM connected to the mobile network. The idea is that the ‘robot’ can roll across the farm watering at night and can ‘call out’ by messaging Tony’s mobile phone when it has fallen over and needs him to get out of bed to right it. Tony’s farm is within line of sight of a mobile tower on a mountain about 45kms away. However, as coverage is patchy and variable on his farm, he cannot count of the ‘robot’ being online, and so he still has to get up during the night to manually check it.

If the threshold has not been crossed, what connectivity is required for digital agriculture to be put in place and what measures can be taken to get it in place?

If the problem is salt and pepper connectivity, the ultimate goal has to be ubiquitous connectivity across farms: or as NBN puts it “no paddock left behind”. However, the report concludes that carrier mobile and fixed wireless networks may not necessarily be the best way of achieving that goal:

National carriers may continue to be the primary providers of connectivity in rural Australia, but their focus – in terms of both technology and business outcomes – is on serving premises and ‘people on the move’ along transport corridors.

Carrier networks, by business case and technology, are geared to solve connectivity issues at large scale – which means premises and vehicles, not paddocks and cows.

As the following diagram from the report/Connected Farms illustrates, the connectivity option that is suitable for a particular application will depend on its bandwidth and performance requirements. 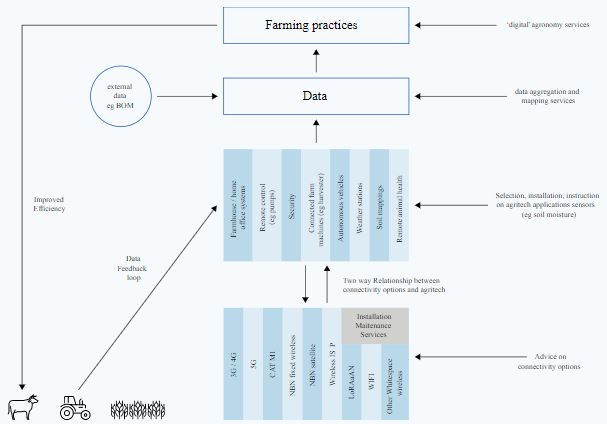 The report identified the emergence of alternative approaches in the market, including farmers installing bespoke solutions, as well as a cohort of second tier retail service providers (RSPs) who are filling in the salt and pepper, including some world leading Australian innovators such as Myriota, which got the low earth orbit satellites before Elon Musk , and Zetifi which have developed a low cost Wi-Fi tower that a farmer can drop off the back of a Ute. 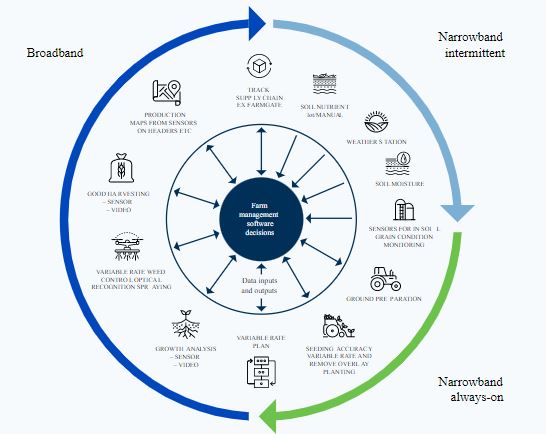 If, or once, the threshold is crossed, what other measures would promote adoption of digital agriculture off the back of that connectivity?

These support skills need to be ‘close at hand’ for farmers: if a farmer depends on remote telemetry to control irrigation pumps on the farm, there is the risk of significant production loss if the technician has to drive hundreds of kilometres to fix the problem.

The development of local ecosystems to support agri-tech has broader economic and social value for rural communities, often by building on current businesses. Many rural towns have a local computer store which can help kitting out a farmer’s house with WIFI for music, video or office, but try getting help in setting up a LoRaWAN out in the paddock, although it is essentially the same technology.

More Government supported training is need to build up these skill sets. There are some standout institutions, such as Longerenong College in Victoria. From December 2020, the National Register on Vocational Education and Training, a joint initiative of the states, territories and Australian Government lists as a course ‘digital agronomy skill set’, though it is not clear from the register of training organisations if this skill set is yet being offered.

While the report has a range of recommendations, the key ‘transformers’ are: