On February 4, 2020, the US Department of Commerce (DOC) published a final rule establishing a process by which DOC may treat a foreign country's "currency undervaluation" as a countervailable subsidy for purposes of US countervailing duty (CVD) proceedings, thus potentially subjecting imports from that country to remedial duties. The final rule retains the key elements of DOC's proposed rule issued in May 2019 but makes several important changes, some of which may broaden the rule's applicability. The new rule will apply to all segments of countervailing duty proceedings initiated on or after April 6, 2020, and will likely prompt domestic petitioners to include new subsidy allegations of currency undervaluation in future CVD petitions or administrative reviews. Although China has historically been a target of US currency/CVD proposals, the yuan has lately been considered fairly-valued, and the new DOC rule could result in increased duties on imports from several countries. Regardless of the target country, however, any such measures would likely face legal challenges both in US courts and at the World Trade Organization. An overview of the final rule is provided below.

Background and Overview of the Final Rule

Under both US law and the WTO Agreement on Subsidies and Countervailing Measures (SCM Agreement), a subsidy is defined as (1) a financial contribution (e.g., a grant or loan) (2) by a government or "public body," or by a private body entrusted or directed by the government; (3) that confers a benefit on the recipient. A subsidy is countervailable where it is "specific" (i.e., where it is limited to an enterprise or industry, group of enterprises/industries, or a region; or where it is a prohibited export subsidy or import substitution subsidy). An affirmative DOC final determination on countervailable subsidies will result in CVDs on subject imports where those goods are also found by the US International Trade Commission (ITC) to have caused (or threatened to cause) material injury to the domestic industry producing the same product.

DOC's final rule acknowledges that neither US law nor DOC's existing regulations specify how to determine the existence of a benefit or specificity when DOC is examining a potential subsidy resulting from the exchange of currency. DOC therefore has determined to address this issue by modifying two of its regulations pertaining to the determination of benefit and specificity in US CVD proceedings. However, the final rule does not specify the types of actions that DOC would find to constitute the requisite financial contribution, and DOC has declined to elaborate on this issue in its response to public comments on the proposed rule. We discuss these issues in greater detail below.

The final rule does not specify the circumstances in which DOC would find that currency undervaluation constitutes a financial contribution, nor does it explain how DOC will determine whether such a financial contribution has been provided by an "authority" (i.e., a government or public body) or by a private entity "entrusted or directed" by the government. However, DOC's responses to various comments on the final rule do provide some guidance:

DOC in the final rule elaborated on the methodology it will "normally" use to determine whether a currency undervaluation confers a "benefit" on the exporter under investigation, as well as the amount of any such benefit. The proposed rule stated only that, in determining whether a benefit is conferred when a firm exchanges US dollars for the domestic currency of a country under a unified exchange rate system, DOC (1) "normally will consider a benefit to be conferred when the domestic currency of the country is undervalued in relation to the United States dollar"; and (2) will request that the Treasury Department evaluate whether the currency of a country is undervalued. The final rule expands on DOC's new methodology and adopts a "two-step approach" for determining benefit:

DOC's responses to public comments on the proposed rule provide limited insight into its likely approach to determining a currency undervaluation benefit. For example, in expressly rejecting claims that, under its methodology, "X percent undervaluation" will necessarily lead to "X percent duty", DOC made clear that the calculation of benefit to a particular firm will "be firm specific" and based on exporters' questionnaire responses. Thus, final CVD rates may be less than the rate of a currency's overall undervaluation and could vary substantially among exporters depending on their reported currency exchange transactions during the period of investigation. DOC also established that it will not consider whether and to what extent an undervalued exchange rate increases a respondent exporter's costs (e.g., for imported raw materials and equipment), thereby reducing the total benefit that the exporter allegedly received on its export transactions. According to DOC, such an "offset" is not contemplated by the CVD statute, and thus was not included in the rule.

These comments provide some additional clarity on DOC's likely approach to identifying currency undervaluation and calculating any resulting benefit to exporters, but significant ambiguities remain. For example—

DOC's decision on each of these issues could have a substantial effect on the agency's benefit determinations and the magnitude of final duty rates based thereon.

The final rule amends DOC's regulations regarding the specificity of domestic subsides (19 C.F.R. § 351.502) to provide that "[i]n determining whether a subsidy is being provided to a 'group' of enterprises or industries within the meaning of section 771(5A)(D) of the [the Tariff Act], the Secretary normally will consider enterprises that buy or sell goods internationally to comprise such a group." In defending its approach, DOC indicated that its determination of whether a currency subsidy is specific would occur pursuant to section 771(5A)(D)(iii) of the Act, which addresses de facto specificity. In response to public comments, DOC explained that "under this regulation, if a subsidy is limited to enterprises that buy or sell goods internationally, or if enterprises that buy or sell goods internationally are the predominant users or receive disproportionately large amounts of a subsidy, then that subsidy may be specific."

This change arguably represents an expansion of the number of sectors and subsidy recipients that would permit DOC to find de facto specificity, i.e., that it may consider to constitute a "group" under the specificity provisions of US CVD law (section 771(5A)(D)). For example, some commenters cited to previous CVD investigations of aluminum extrusions and coated paper to illustrate that treating all exporters as a "group" for purposes of specificity for domestic subsidies (as opposed to export subsidies, which are per se specific) is contrary to DOC's past practice. A "group" that includes all exporters and importers would arguably be even broader. While DOC appears to acknowledge this shift in practice (by noting that "it is a fundamental principle of administrative law that an agency is allowed to change its practice, provided the change is reasonable and explained"), the agency maintains that (1) its new approach is consistent with US law; and (2) "because U.S. law is consistent with our international obligations", the new approach is also consistent with WTO rules.

Notably, the final rule adopts an even broader interpretation of the term "group" than that which DOC included in its proposed rule. DOC initially proposed that it would consider "enterprises that primarily buy or sell goods internationally" to comprise a group (emphasis added), but has omitted the term "primarily" from the final rule in response to public comments. Thus, under the final rule, DOC potentially could find a subsidy resulting from currency undervaluation to be specific to the traded goods sector of an economy even where it is available to enterprises that engage in international trade to a lesser degree.

DOC's final rule will apply to all segments of CVD cases initiated on or after April 6, 2020, and it is likely that US petitioners will begin to utilize the rule shortly thereafter in both new CVD investigations and administrative reviews of CVD orders now in force. Given the significant ambiguities in DOC's final rule, particularly with respect to the agency's determination of financial contribution and benefit, these initial proceedings will be critical in terms of clarifying DOC's practice with respect to treating currency undervaluation as a countervailable subsidy.

These early cases will also likely indicate the range of countries potentially subject to future currency/CVD allegations. Under one approach, for example, DOC could limit its inquiries to "non-market economy" countries or those with a substantial state-owned banking sector. On the other hand, DOC's reach could be much broader. For example, the IMF's most recent annual assessment found multiple countries to have negative REER gaps in 2018, which, according to the IMF, implies an undervalued exchange rate (as shown in the table below).[1] The Treasury Department has relied on these IMF assessments of currency undervaluation in its recent annual reports to Congress on the Macroeconomic and Foreign Exchange Policies of Major Trading Partners of the United States.[2] 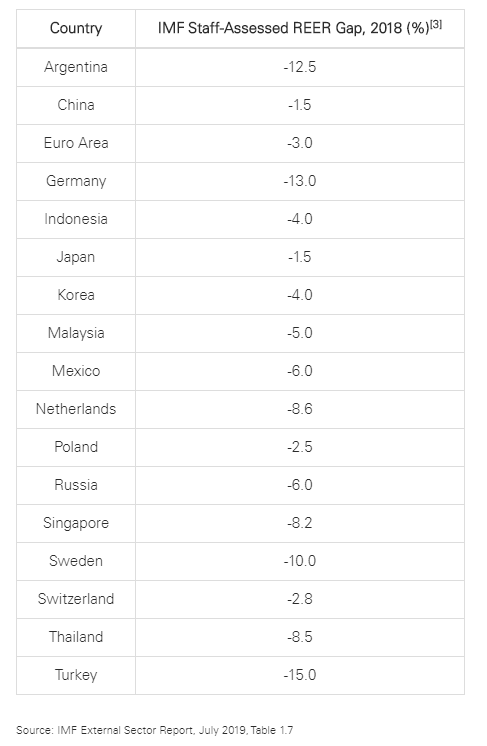 DOC's treatment of ambiguous provisions – for example on "entrustment or direction" or "government action" – will likely determine whether exporters in these countries have received countervailable subsidies under the final rule.

Finally, it is highly likely that one or more of DOC's initial currency undervaluation determinations, as well as the final rule itself, will face legal challenge before the US Court of International Trade or the WTO's Dispute Settlement Body. For example, DOC's final rule expands upon or changes outright past agency practice on the treatment of currency policy under US CVD law, and Congress repeatedly considered and rejected legislation to amend the law so that DOC could act. Plaintiffs might therefore argue, as some public comments did, that DOC lacked the statutory authority to alter its approach without congressional action. Furthermore, the final rule could permit interpretations of financial contribution, benefit and de facto specificity that many legal experts have long argued are inconsistent with the SCM Agreement. However, whether and to what extent such legal challenges – as well as diplomatic complaints from US trading partners – emerge may depend on the countries targeted by future currency undervaluation allegations and any CVDs resulting therefrom.

The final rule is available here.