Energy from Waste: the solution to Australia’s war on waste?

Following the Council of Australian Governments (COAG) Waste Strategy Response announced in 2020, Energy from Waste (EfW) technologies have emerged as potentially viable methods of managing waste in Australia, supporting the Australian government’s aim to become a completely circular economy over the coming decades.

This emerging sector undoubtedly brings significant political, economic and regulatory challenges, but also opportunity for investors, industrialists and even the National Electricity Market with a new source of clean baseline energy production (where the input is Australia’s waste).

Below, we explore the EfW opportunity and discuss what needs to happen on a policy and regulatory level for broader commercial uptake and investment into the sector.

What is Energy from Waste?

While EfW incorporates any technology or process that converts ‘waste’, defined as any kind of waste that would otherwise go to landfill or be exported, into energy or energy carrying products, for current purposes we are primarily focused on thermal processes (combustion, gasification and pyrolysis).

Combustion and gasification differ. Combustion burns the waste with the resulting heat converting water into steam and then electricity; while gasification uses oxygen or steam reactions that cause the waste to convert into a gaseous mixture. This mixture has applications beyond electricity and can also be converted into products such as diesel fuel, hydrogen fuel or ethanol.

Pyrolysis is the heating of organic material, such as biomass, in the absence of oxygen. The process produces three products: biochar, bio-oil and bio-gas, each with a range of potentially useful applications. Pyrolysis can be used for the treatment of organic wastes, including plastics, and may be deployed on a smaller scale and in a broader range of locations than large scale combustion and gasification processes.

Is Energy from Waste a commonly accepted technology?

The EfW sector has struggled to gain traction in Australia for a number of reasons:

Whilst Australia has faced a general lack of any substantial investment into EfW projects, the sector in other parts of the world, such as Europe, Japan and the United States, has proven to be highly successful both from a commercial and waste management perspective. In particular, case studies in Europe have shown that when a country has adopted EfW technology its recycling rates have also improved, provided the correct regulatory environment and incentives are put in place.[1] 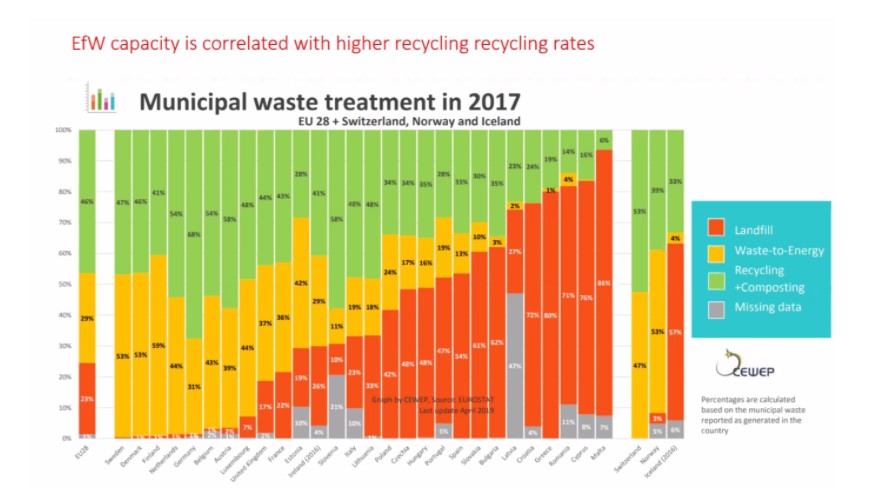 Why did Europe adopt Energy from Waste?

There are several key factors behind Europe’s adoption of EfW technology. The first is necessity. With limited land available and strong population growth leading to increased waste, an alternative to landfill had to be found. The second is environmental concerns. Individuals in Europe, in particular the relatively wealthier Western European nations, were early movers in voicing their concern over climate change and the importance of mitigating future damage. As a result political support followed for technologies such as EfW.

Despite the inductive conditions for EfW in Europe, at its early stages the adoption of EfW technology still required a supportive and consistent policy and regulatory approach between the various levels of government in each country to support the development of the sector at a broader European Union level.

At an individual country level, the countries who have found the most success with EfW, such as the Netherlands, were early adopters of a uniform country-wide waste levy. This helped standalone EfW projects become more economical for private investors. With a pricing incentive in place, countries then developed regulatory and technical standards, which continue to be updated to account for evolving EfW technologies (albeit at an European Union level). For example, in December 2019, the European Union released the Best Available Techniques (BAT) Conclusions for Waste Incineration under Article 13(6) of the Industrial Emission Directive (IED). The document contains 37 BAT conclusions which seek to reduce emissions from waste incineration and to better improve EfW’s position in the circular economy and waste management hierarchy.[2]

The European Union regulatory framework, which regulates over 400 EfW plants currently in operation in Europe, consists of:

What else is required for Energy from Waste to be successful?

Europe’s experience with EfW shows that critical to the economics of each proposed project is a stable and long-term supply of waste. Local councils often coordinate and combine their waste quantities to support the development of large scale EfW projects. To minimise transportation of waste, projects are often located close to the major sources of waste, for example cities for their municipal waste or large industrial emitters of waste. However, and as mentioned, this creates a tension with the local community.

The community opposition could be avoided by locating EfW plants in regional locations and away from residential homes, but this has two disadvantages:

With respect to other end products, while in northern hemisphere countries the heat generated by a EfW plant can be used for district heating, in Australia it is more likely that heat will be used by industry for manufacturing processes, utilised in greenhouses for agriculture purposes or could be turned into cooling systems for residential or commercial use.

Other by-products, such as syngas, char and oils, can also be sold as additional sources of revenue rather than sent to landfill as an additional cost.

Separately, while historically the process of converting waste to energy produced substantial carbon emissions as a by-product, modern technologies have largely removed this negative consequence. For example:

What does Australia’s Energy from Waste sector currently look like?

Australia does not yet have any large scale operational EfW plants. However, a strong pipeline of EfW projects is emerging with two plants currently under construction in Western Australia and a number of others around the country in the process of obtaining finance and regulatory approvals. Announced projects include the following.

With a clear pipeline of Energy from Waste projects, how will more prospective projects become feasible?

Taking lead from other jurisdictions around the world, implementing the following could encourage new EfW projects in Australia:

Globally, EfW projects are expanding as jurisdictions implement the necessary regulatory framework and contractual mechanisms needed to facilitate growth in EfW technologies. In Australia, renewed political commitment to developing and investing in circular economy waste infrastructure and technology is a strong indication of the political support for the further development of the EfW sector. EfW, if used appropriately within the waste management hierarchy, can become a key part in the circular economy as it does not detract from recycling, diverts waste from landfill, reduces environmental and social impact, and provides additional, low emission, baseload electricity from waste which would otherwise end up in landfill.