Some Hard-core Knowledge for Investing in a Chinese VIE

This title is meant to be eye-catching. Although I am not going to make it serve the purpose of luring the readers to a verbose trigger-warning to avoid investing in a Chinese VIE because of the structure’s unreliability. There have been very many discussions and literatures about that. The following text is given, however, on the assumption that you’ve decided to make do with a Chinese VIE. Many people won’t shy from Alibaba (BABA) or Tencent (0700.HK) just because the structure of them may be as unstable as they disclose after all.

VIEs, or variable interest entities, are ubiquitous. Since its origin in China dating back to the early 2000s, VIE structure has remained very popular, especially in industries such as internet, gaming, education, medical service et al., where most privately-owned mega companies or “unicorns” arise. The idea is simple – because Chinese law restricts or even prohibits foreign investment in certain “sensitive” industries, such as internet, this ingenious yet fragile device is set up to get around such restrictions by bundling the Chinese assets into one or several legal entities also widely called as VIEs held by Chinese individuals, which in turn, together with those VIEs, sign a series of controlling contracts with international holding companies (in most cases their Chinese subsidiaries) to hand over the control of the VIEs as well as their profits. 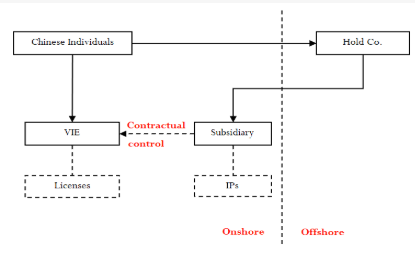 To achieve that in China, the legal documents must not be as simple. The text is dense and you may have to put a cold towel on your head and read it several times, or you may choose to call bet outright. But before you sign, keep in mind the following candid advices from a seasoned legal practitioner:

1. Make sure the company is controlled by Chinese. Once thought to be a remote possibility, the draft of the Foreign Investment Law of the People’s Republic of China (or PRC) was clearly mentioned in the central government’s 2018 legislation plan. The law, if enacted as the latest known public version, will be likely to revolutionize the existing laws and regulations governing foreign investment in China. It purports to, among other things, adopt a “see-through” approach to determine whether there is foreign investment in a PRC company (including VIEs), regardless of the holding structure the company has. To put it simple, if pierced through the complex structure a company is determined to be actually controlled by foreign investors, even if the VIE is nominally owned by Chinese individuals, it will still be deemed as a foreign invested enterprise, or FIE, thus be put under scrutiny of foreign investment policy. That said, if a VIE structure is not controlled by Chinese citizens or state-owned bodies ultimately, the very idea of setting up VIEs to get around foreign investment restrictions will be void, and the foreign investors behind will have to choose from getting approval which in many cases is hardly possible, or being squeezed out. To avoid that hard decision, the current and continuing Chinese control of the company is essential.

2. Look closely at how the Chinese invest in the international holding company. VIE companies, together with other companies established overseas but tied to business interests mainly within China and controlled by PRC legal or natural persons are also known as “red-chip”. There are two kinds of red-chip - one is red-chip mainly owned by Chinese individuals directly or their overseas holding vehicles (so called “small red-chip”), which is most common among overseas listed companies; the other (the “big red-chip”) is instead majority-owned by Chinese entities directly or indirectly, which will fall into the regulation of an obsolete yet rigidly-written rule. The rule, aka 97 Red-chip Guidance, puts in place many cumbersome or somewhat unrealistic restrictions on overseas listing with Chinese assets, for instance, it forbids Chinese assets owned by foreign entities less than three years from doing foreign listing. The definite constitution of “big red-chip” requires it to be owned by a Chinese entity, or by several Chinese entities (including the biggest holder) collectively, for more than 50%. You will have to dodge it to have a smoother exit.

3. Choose VIEs clearly serving the purpose. Although the rationale of VIEs is to haggle over foreign investment restrictions, such restrictions are not a must to form the effective control of a VIE company. In fact, some companies, including a few already listed, in industries opened to foreign ownership also adopt VIE structures. However, mainly because of its oddity, major listing venues have various requirements for VIE applicants. Even for a disclosure-based market as in the US, the SEC still needs applicants to at least provide certain justifications for VIE usage. The Hong Kong Stock Exchange, or HKSE, goes further. A bit counter-intuitively, as a regulatory body, it specifically requires that a VIE-structured applicant must prove the use of VIE is “narrowly tailored” to only operate in industries that limit foreign investments to the extent that the licenses operating its business could not have been obtained if the VIE is an FIE. In a previous case in which a company in non-restricted industries went listing in the HKSE, the Chinese securities regulatory body is believed to have expressed upset towards the HKSE and given warnings to the company. You won’t want to share that experience.

4. Better not go too far, maybe. The underlying rationale for setting up VIEs is exactly why the VIE structure must have sounded alarming to the PRC government - namely, that possible foreign ownership of socially vital industrial sectors have strong national security implications. It is only because of the wide-spread market practices and the large number of interest groups involved that the central government remained purposefully half-blind, mostly not bothering to mention “VIE” or “contractual control”. However, for certain industries, PRC law does explicitly prohibit its use, e.g., a rule governing internet press business provides that foreign investment is not allowed to take over PRC companies by way of VIE; also, a proposed draft rule regulating private education also prohibits control of not-for-profit schools through contractual arrangement. VIEs still exist in these industries, where some may be even bold enough to seek listing, while remember the indispensable part of Chinese version of “rule-of-law” is arbitrary implementation of given rules. In a country where fiddly rules and obscure decision-making are both the norm, even if rules themselves unchanged, the law may sometimes feel toothless, but can definitely bite.

Risks and rewards of investing in Africa - part 2