The countdown to Open Banking in Australia has begun and, with it, Australia’s Consumer Data Right is set to commence. The final timetable for the phasing-in of Open Banking has been released in the “lock-down” rules which were recently issued by the ACCC. In this short Alert we summarise the start dates.

What is Australian Open Banking?

Also following the enactment of the Consumer Data Right, the ACCC released its “lock-down” form of the Proposed Rules in which the ACCC details how the Consumer Data Right will apply to consumers, banks and others with respect to the designated data. The Proposed Rules distinguish data that relates to products offered by a data holder (“product data”) from consumer data that relates to data held by a data holder about that consumer (“consumer data”). Product data can be requested by any person but consumer data can only be requested by the consumer themselves, or an accredited person on behalf of that consumer. An accredited person must not collect more data than is reasonably needed and can only use data for the purpose that a consumer has consented to. This is known as the data minimisation principle.

Detail around accreditation of data recipients, consumer consent, and access, collection and use of data can be found in the Proposed Rules.

As noted in our earlier Alert, the practical, technological requirements to access this data will be set out in the standards being developed by Data61 as the Data Standards Body. The current form of standards can be found here.

When does Open Banking start in Australia?

The ACCC has published the timeline for Open Banking to commence. Banking products are being phased in and the four largest Australian Banks are required to start before the other Authorised Deposit-taking Institutions. However, other ADIs may choose to participate before they are required to. The dates and details are set out in the following diagram. 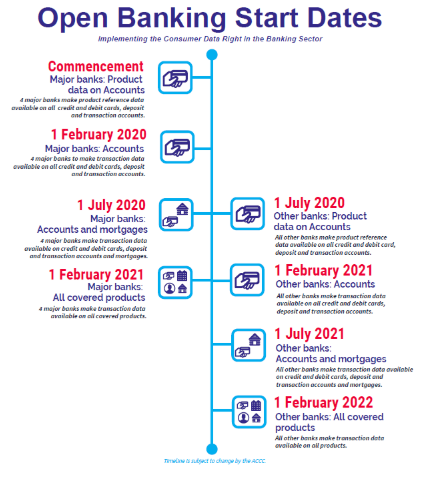 Banking is only the first sector to which the CDR will apply. The ACCC and the Australian Treasury are currently consulting in relation to its application to the energy sector. Further information in relation to this is set out in our Alert. But it won’t end there.