Figures provided by the UK’s Financial Conduct Authority (FCA) show that in spite of the thousands of tip-offs on insider dealing it receives from banks and other financial services firms, it rarely opens an investigation.

In a response to a freedom of information (FOI) request made by Greenberg Traurig’s White Collar Defence and Special Investigations Practice, the FCA confirmed that as of 4 March 2019 it had opened 61 investigations into insider dealing since 1 April 2018.

In contrast, published figures1 show that in 2018 it received 5,107 tip-offs of suspected insider dealing under the Suspicious Transaction and Order Report (STOR) regime, and the same pattern was repeated in the two preceding years.

In this GT Alert, we consider the impact of this trend, illustrated in the following chart: 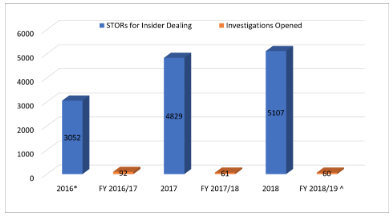 A STOR is a report a firm submits to the FCA, where there is reasonable suspicion that an order or transaction constitutes actual or attempted insider dealing (or market manipulation). In such circumstances, Article 16 of the Market Abuse Regulation (MAR) requires a report be made to the FCA without delay, and it must include certain prescribed information including:

Such reports are prepared by dedicated and experienced teams trained to closely analyse the orders and transactions being processed through their respective firm books. STORs should therefore be a key weapon utilised by the FCA in investigating and prosecuting suspected insider dealing.

The FCA’s FOI response confirms, however, that since 1 April 2014, it has commenced only nine prosecutions for insider dealing, which in turn resulted in just six convictions. These figures come in the wake of the widely reported criminal trial of Fabiana Abdel-Malek and Walid Choucair, which reached a disappointing conclusion for the FCA in November 2018 when a jury failed to reach a verdict. A re-trial is set to commence on 15 April 2019.

Given the high number of tip-offs on insider dealing received by the FCA, the comparatively low number of investigations and prosecutions arguably do not provide an effective deterrent.