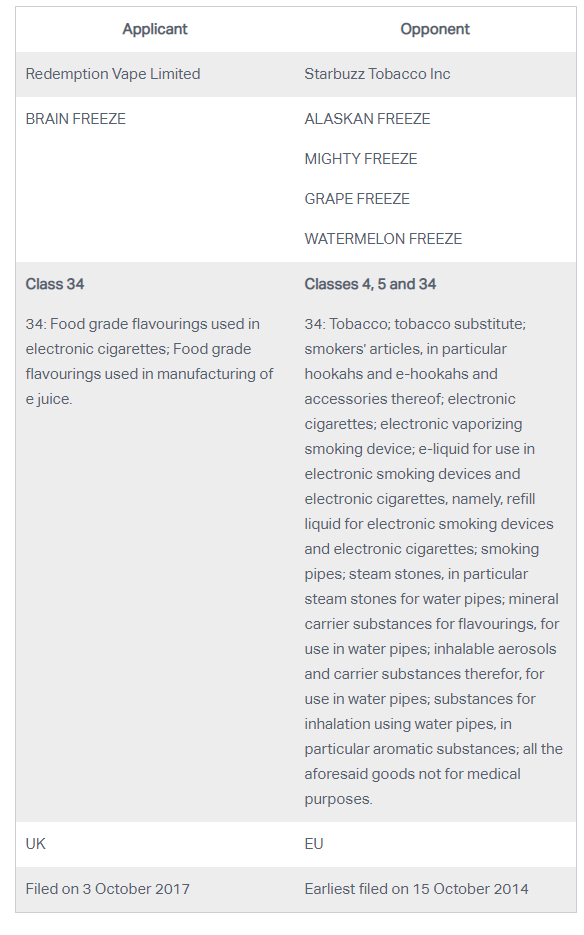 Redemption Vape Limited (the "Applicant") filed a UK trade mark application for BRAIN FREEZE in class 34 (the "Application"), which was opposed by Starbuzz Tobacco Inc (the "Opponent") based on their earlier registrations for ALASKAN FREEZE, MIGHTY FREEZE, GRAPE FREEZE and WATERMELON FREEZE in classes 3, 5 and 34 (the "Earlier Rights").

Comparison of the goods

Both products would target the same consumer who would purchase them at the same retail outlet and would expect that such goods are manufactured and produced by the same undertaking. The goods were considered to have a medium degree of similarity. However, the Applicant's goods had a low level of similarity with "electronic cigarettes" as they differ in nature but are still considered complementary.

The Opponent submitted that the average consumer for e cigarettes and e liquids would be the same as the goods are of relatively low value with consumers not displaying the same brand loyalty as those that purchase traditional tobacco cigarettes. The Opposition Division agreed and concluded that the consumer would pay an average degree of attention when purchasing these types of goods.

Comparison of the marks

Neither word is more dominant in the application for BRAIN FREEZE as they the words would be read together as a phrase rather than two separate words. The same can be applied to the Opponent's Earlier Rights, as they all consist of well-known English words.

The Opponent did not submit any evidence of how the marks were being used and the Opposition Division concluded they had an average level of distinctiveness.

It was held that BRAIN FREEZE has such a strong conceptual meaning that it counteracts the visual and aural similarities that were found with the Earlier Rights. Therefore, there would be no likelihood of confusion and the opposition was unsuccessful.