Proxy Access — the March Forward Continues but at a Slower Pace 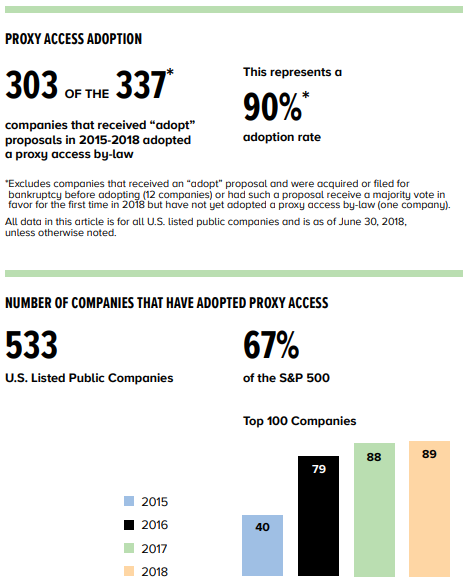 The most common formulation of the headline terms permits shareholders owning at least 3% of company stock for at least three years to submit proxy access nominees up to a maximum of 20% of the board/minimum of two directors with up to 20 shareholders being able to aggregate their holdings to meet the minimum ownership requirements. The short hand for proxy access by-laws with this formulation is 3/3/20/20. 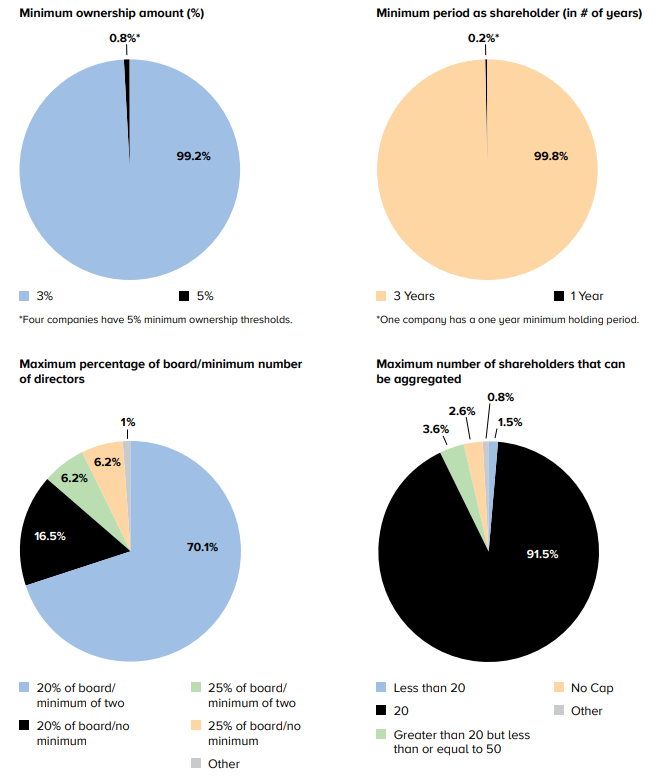 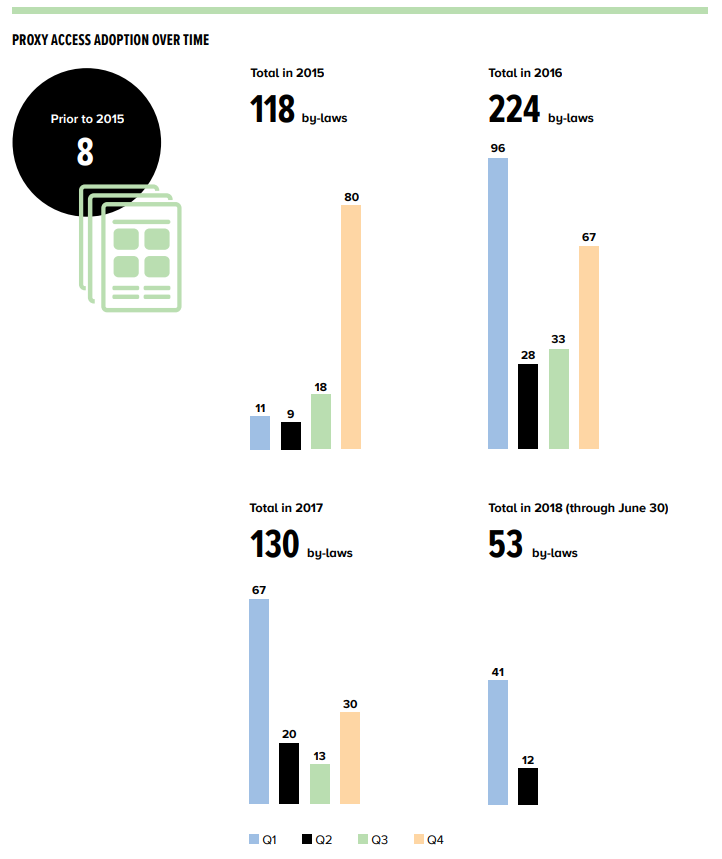 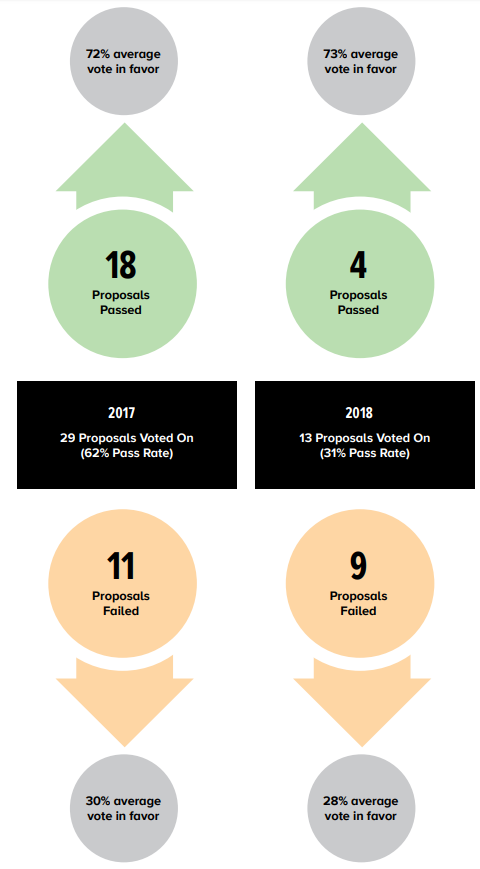 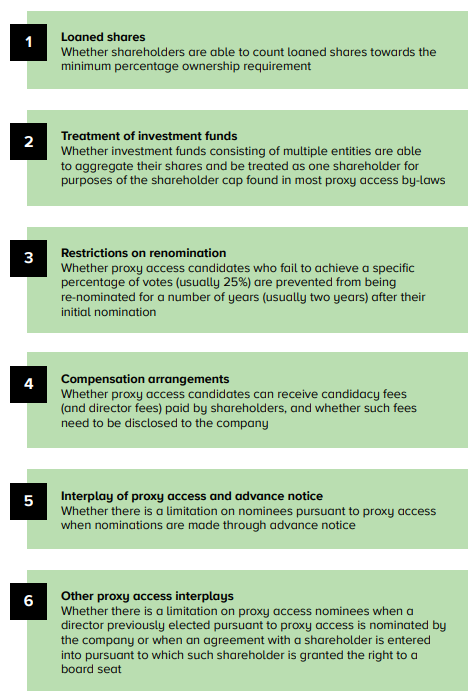 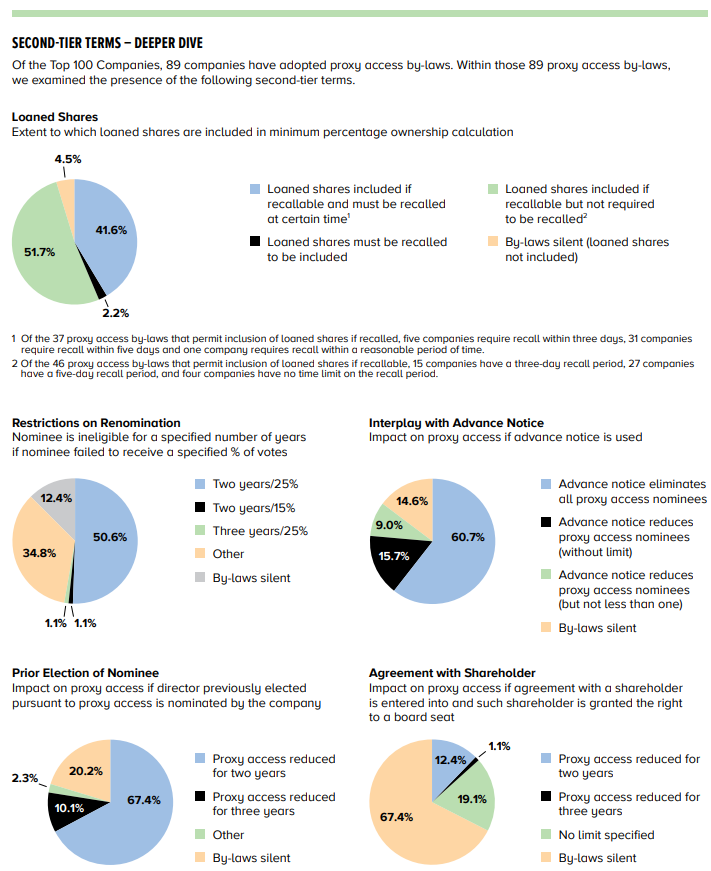 Companies have overwhelmingly adopted proxy access by-laws with 3/3/20/20 terms, in contrast to the “3/3/25/no cap” terms that many shareholders are seeking. Shareholder proponents have not acquiesced to the status quo; they continue to advocate for “fix-it” proposals that are designed to bring 3/3/20/20 by-laws closer to the 3/3/25/no cap by-laws they espouse, as well as requesting more shareholder-friendly second-tier terms. “Fix-it” proposals generally fall into three categories: “tailored,” “twoterm”/“three-term” and “shareholder cap” proposals.

“Tailored” proposals request amendments to several (typically four or five) terms of a company’s by-laws. The terms include both headline and second-tier terms, such as the counting of loaned shares or treatment of investment funds. Only 16 tailored proposals have been submitted to date and none were submitted in 2018. Of those 16 proposals, seven were excluded or withdrawn, two passed with a 67% average vote in favor and seven failed with a 33% average vote in favor. The two “tailored” proposals that passed in 2016 were submitted at companies that had adopted by-laws with a 5% minimum percentage ownership threshold and to date, remain the only “fix-it” proposals that have passed. Not surprisingly, both companies subsequently amended their proxy access by-laws.

“Two-term” and “Three-term” proposals target companies on two or three issues, which typically include the percentage of the board electable pursuant to proxy access, the shareholder aggregation cap and the restrictions on renominations of failed proxy access candidates. While several companies attempted to exclude these proposals through the SEC’s no-action process, all such attempts have been unsuccessful.

There were 21 two-term proposals between 2016 and 2018. Of those 21 proposals, one was withdrawn while the remaining proposals all failed with a 27% average vote in favor.

There were 12 three-term proposals between 2016 and 2018. Of those 12 proposals, one was excluded, none passed and 11 proposals failed with a 29% average vote in favor.

This decline in withdrawals/exclusions may be attributed to a refinement in shareholder proposals prior to submission, leaving a pool of proposals less vulnerable to exclusion and withdrawal. For example, the decline in “fix-it” proposals can be attributed to the SEC’s decision in 2017 to generally allow companies to exclude “shareholder cap” proposals requesting an increase to 40 or 50 shareholders under Rule 14a-8(i)(10), so long as the company’s proxy access by-law already had an aggregation cap of 20 shareholders and the company could represent as to certain facts about its shareholder base. 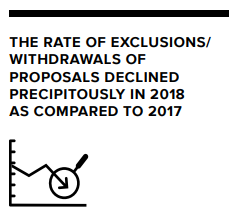