On December 26, 2018, the Chinese agency for regulating drugs and medical devices (the National Medical Products Administration; “NMPA”) released the Announcement on Issuing the Administrative Measures for Overseas Inspections of Drugs and Medical Device (hereinafter referred to as “Regulation”) to ensure the quality and safety of drugs and medical devices developed or manufactured abroad. For the first time, a set of detailed working procedures has been laid out to equip NMPA with standardized guidance for overseas inspections. It is a decisive step of the Chinese government to build up effective post-market supervision and administration.

The primary goal of overseas inspections is to ensure that the development and manufacturing of drugs and medical devices meet the same standards applicable to domestic products in China, as mandated by law. If a product falls short of the requirements, its entry to China may be halted. It can be inferred from the release of this new Regulation, and the directives from the central government to intensify overseas inspections that foreign manufacturing sites and R&D centers will have to gear up for more frequent inspections from NMPA.

In this article, the Regulation’s background and content will be analyzed in detail, and practical recommendations to overseas MAHs[1], manufacturing sites and R&D centers will be presented.

1.1 International Practice and Practice in China

Overseas inspection is not a recent news for foreign pharmaceutical companies, considering that NMPA has started overseas inspections of drug companies early in the year 2011, and medical device companies in 2015. To date, NMPA has delegated 116 inspection teams to inspect 131 drug products produced in 25 countries. 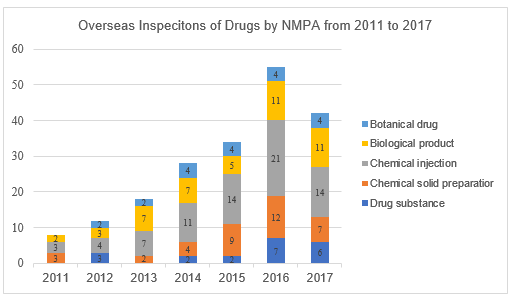 “China conducted much fewer overseas inspections compared to developed countries. In order to keep pace with all international practice, when drafting the regulation, NMPA has gained experience in a global scale.” as stated by one of its officials. Meanwhile, NMPA has been recruiting more inspectors which makes more overseas inspections feasible. In the executive meeting on April 12, 2018, the State Council explicitly required bolstering overseas inspections of drugs and medical devices. NMPA emphasized the same in July, 2019.

Before the Regulation, overseas inspections have been conducted mainly based on general substantive laws, such as Regulations on Supervision and Administration of Medical Devices and the Good Manufacturing Practice for Drugs. However, there were no detailed rules and procedural guidance. Early in 2012, former State Food and Drug Administration formulated Administrative Measures for the Inspection of Overseas Pharmaceutical Manufacturers (Draft for Comments), which has never come into force. It has been demonstrated by the inspectors that in practice the lack of specific laws to support it makes it difficult to eliminate obstacles in law enforcement.[2] Another, without clear guidelines, companies were left with uncertainty.

In recent years, the Chinese regulatory authorities in healthcare industry have been restructuring the regulatory framework from stringent pre-approval to rigorous post-approval supervision. They have made enormous efforts to remove obstacles to accelerate the introduction of overseas drugs and medical devices, including moving forward with implementing fast-track registration pathways for urgently needed new foreign drugs, accepting overseas clinical trial data, in addition to relaxing some statutory requirements, such as the cancellation of the compulsory inspection of chemicals in batches at the time of importation[3]. Consequently, all these rules make post-approval supervision and administration more imperative. The overseas inspection is a vital tool to help the regulatory authorities curb the safety risks while expediting the introduction of drugs and medical devices.

All MAHs, manufacturing sites and R&D centers of drugs and medical devices imported or intended to be imported to China shall be subject to the Regulation. When necessary, inspections can be extended to cover the production sites, suppliers, or other contractual parties of raw materials, auxiliary materials, and packaging materials, etc.

NMPA determines the annual inspection targets by means of risk evaluation and random selections in accordance with the suggestions on inspected drugs and medical devices, R&D sites and manufacturing sites from relevant departments. In particular, priority consideration shall be given to certain risk factors[4] including 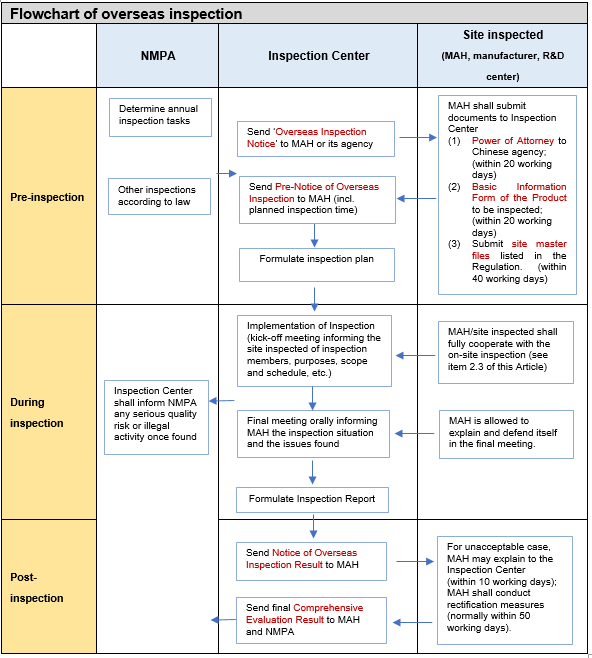 2.3 Main Responsibilities of the Companies Inspected

Before inspection, MAH is given limited time to submit Site Master Files and other materials required. Once the inspection time has been decided, MAH cannot change the time unless it can provide reasonable explanation to the Inspection Center. The Regulation requires MAH to appoint a Chinese agency, which is in responsible for liaisons between MAH and NMPA (Inspection Center) and assistance with the overseas inspection.

During inspection, the site inspected shall

After inspection, MAH shall

The aim of the inspections is to guarantee the authenticity, reliability and compliance of the relevant overseas processes of development and production of drugs and medical devices. To ensure favorable results after the on-site inspection, the MAHs, manufacturing factories and R&D centers overseas shall strictly follow the statutory requirements and standards of P.R.C.[6]

The inspection results announced by NMPA were analyzed. In addition to some problems that may lead to failure after evaluation, such as uncontrollable product quality and serious data reliability issues, the main deviations found in quality control and quality assurance from the past inspections are summarized below. 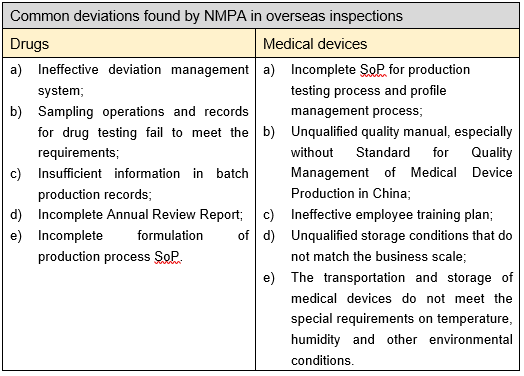 Unless the inspection result is ‘Acceptable’, NMPA would take risk control measures as “penalties” depending on different circumstances, such as

In general, the Regulation standardizes the procedures of overseas inspections while imposing tougher requirements to foreign MAHs, manufacturers and R&D centers of drugs and medical devices. Being well prepared for NMPA inspection has become more essential, considering the serious consequences (e.g. import suspension/prohibition and adverse effect on the company reputation) of a negative inspection result. If your company imports Drugs and Medical Devices to the Chinese market, being well-informed and prepared are paramount.

Here are some recommendations:

Firstly, overseas development and manufacturing must always be compliant with current and changing laws and regulations in China. The foreign MAHs, manufacturers and R&D centers shall carefully examine and identify the potential gaps between different local standards, and eliminate as effectively as possible to mitigate the possible negative inspection results from NMPA.

Secondly, considering overseas inspection is a prevailing global practice, it is advisable for multinational pharmaceutical and medical device companies to have department/team in-charge of preparing for potential overseas inspections. Such department should be responsible for quality and risk control, organizing self-inspections in daily operation, preparations for potential inspections (e.g. implementing inspection SoP, providing staff trainings, and preparing all necessary documents) in advance, and coping with real on-site inspections.

What you should do if your company is due for inspection: