Whiplash reforms - what you need to know

The Civil Liability Act 2018 came into force on 20 December 2018, and provides for the implementation of a number of key reforms to the way in which low value personal injury claims are dealt with. We examine the so-called "whiplash reforms" and consider their likely impact on personal injury and other claims.

What is a whiplash injury?

For the first time, we now have a legal definition of what amounts to a whiplash injury. The 2018 Act defines whiplash as:

The definition does not include:

This definition can be reviewed and amended by the Lord Chancellor but not for three years after the reforms have come into force. It is however clear that there is an exemption if the whiplash is part of or connected with another non-soft tissue injury.

What will change as a result of the reforms?

Fixed tariff based system for damages

The reforms see the introduction of a fixed tariff based system for damages for whiplash injuries lasting up to two years.

However, it will not apply to claims pursued by motorcyclists or their passengers, cyclists, pedestrians or other road users who are not using a motor vehicle.

There will also be some discretion for the Court to allow up to a 20% uplift on the tariff in certain circumstances.

The proposed tariff is as follows: 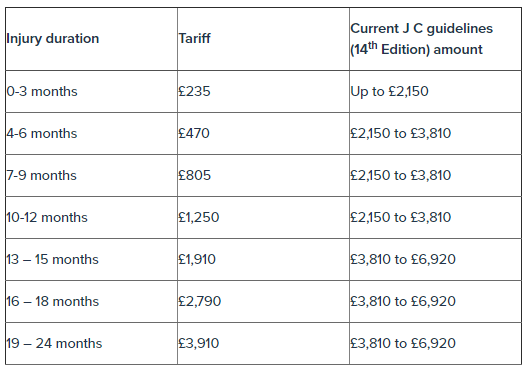 The proposal at present is that costs would remain those for small claims for injuries within the tariff.

The reforms include a prohibition on settling whiplash claims without medical evidence from an accredited medical expert.

A new pre-action protocol will be introduced as well as a portal for such claims to be used by victims.

The new portal is being developed by the Motor Insurance Bureau and will be supported by an independent review process which will work alongside other insurance industry systems such as the Motor Insurance Database. The system is intended to be predominantly online and user-friendly so it can easily be utilised by litigants in person. A contact centre will be set up for those who cannot use the digital offering.

This does not require primary legislation and can be implemented through a change to the Civil Procedure Rules.

It is anticipated that the rule change will be introduced in conjunction with the whiplash reforms.

What will happen next?

It was initially envisioned that the reforms would be implemented by April 2020. Whether this will happen remains to be seen.

Claimant firms may look to new markets which will be unaffected by the changes, for example credit hire (albeit there is a suggestion that this should also be considered as part of the reforms), or a bigger focus on employers' liability and public liability claims which generally involve injuries valued above £2,000 and so will be exempt from the proposed changes.