When is Mediation Mandatory? - A Comparative Analysis of Mandatory Mediation Across Canada

Trials are expensive. The costs associated with litigating a matter to trial can sometimes outweigh the potential reward being sought. Justice is not cheap, but there are alternatives for a resolution when the parties are reasonable and realistic.

The Supreme Court of Canada has recognized the need for a culture shift in order to create an environment that promotes timely and affordable access to the civil justice system. The court has stated that:

"while going to trial has long been seen as a last resort, other dispute resolution mechanisms such as mediation and settlement are more likely to produce fair and just results when adjudication remains a realistic alternative.1"

Mediations, both court mandated and ad hoc, play a crucial role in our nation's litigation process. Over 90% of litigated matters will eventually come to some form of settlement prior to trial and mediations are a large part of that.

Not all provinces however require a mediation prior to trial and there are different rules and requirements depending in which forum the litigation takes place. Some jurisdictions have mediation requirements which can include private mediation, whereas others involve court appointed mediators or judges only.

While Alberta, Ontario and Quebec all have some form of mandatory dispute resolution requirement, in British Columbia a "settlement conference" is only required if requested by the parties, or ordered by a judge.

Below is a summary of the different requirements, dependent on the jurisdiction: 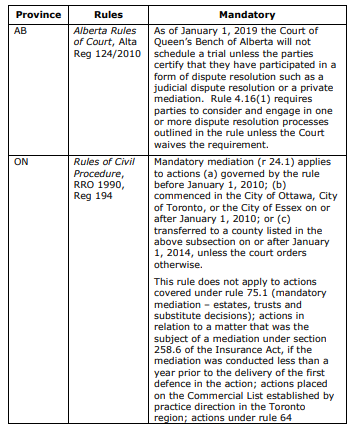 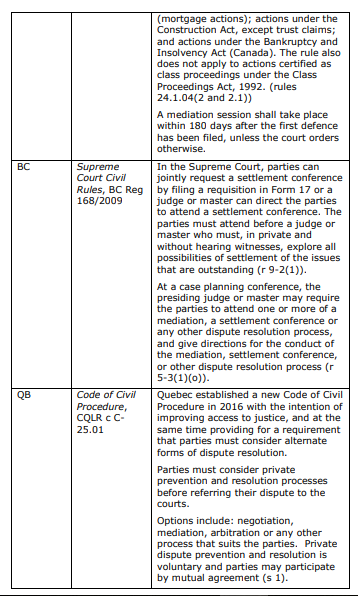